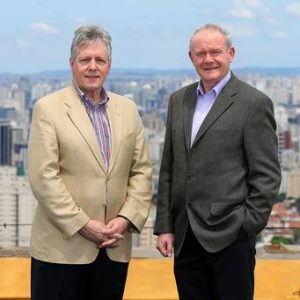 The North’s Executive and Assembly are under threat of collapse. As of  mid-October the Democratic Unionist Party (DUP) was refusing to attend talks aimed at resolving the impasse – objecting to the “media circus” and even, apparently, the very involvement of the Irish government.
The UK government is requiring the Assembly to impose the same cuts in social welfare as are hitting the rest of the UK. The DUP is willing to go along with the cuts, but Sinn Féin (SF) is not.
However, while the crisis seems terminal, there are contradictory factors. None of the contending parties has a ‘Plan B’ in the event of the collapse. Another election would return the current line up to the Assembly, with at most only a handful of seats changing hands. None of the parties, nor the British government, has an appetite for a return to Direct Rule. There is also a deep fear ingrained in society of a return to widespread political violence.
The DUP labours under an unavoidable burden. It was built round the charismatic figure of the late Ian Paisley. Inevitably there have been difficulties of transition to conventional leadership styles.
Within the DUP, Peter Robinson’s position as leaderhas been weakened. Who his successor will be is now widely discussed. Last month, he removed two ministers linked to the DUP’s traditionalist wing. Social Development Minister Nelson McCausland had been mired in controversy regarding contact with construction companies. Health Minister Edwin Poots had also become bogged down in constant controversy. McCausland, who believes among other  things that  Ulster Protestants are descended from the lost tribes of Israel, has been enmired in controversy after incorrectly ‘naming and shaming’ four firms in the Assembly which he falsely claimed had received overpayments amounting to £18m.
The Social Development Committee also concluded McCausland deliberately misled MLAs over a meeting with a double-glazing firm which had made donations to the party.
Poots was criticised for refusing to lift a ban on gay men giving blood and reprimanded by Northern Ireland’s Lord Chief Justice who said it was detrimental to the rule of law for him to claim he might not  receive a fair ‘trial’ in his appeal of a court decision that the ban was irrational.
While Robinson was never going to act in response to squeamish media coverage, he showed unexpected indecisiveness in dealing with McCausland.
The DUP has also begun, for the first time, to show public division. After his removal as minister, Poots told the BBC: “I already knew that it wasn’t really the intention for Peter (Robinson) to stay on for that period of time (as First Minister) in any event”. Unleashing an uncharacteristically colourful image, Robinson duly rounded on (unnamed) internal critics as “people with the strategic vision of a lemming”.
The other major party, Sinn Féin, is increasingly focused on the Republic since in the best of prognoses it only has a realistic chance of taking three extra seats in the North while even doubling its current 14 seats in the Republic would be something of a disappointment.
Of course in the North, Sinn Féin is a permanent and responsible party of government because of the power-sharing arrangement. It must govern within the financial constraints imposed by the Conservative-dominated coalition in Westminster. In the Republic, it is a party of populist opposition, filling the space vacated by the Labour Party. Its hammering of social-welfare cuts in the North exemplifies its trans-border ambition, for it covers its electoral back in manoeuvres in the Twenty-Six Counties.
An additional difficulty is that both the Irish and UK governments are focused on upcoming elections. So Enda Kenny reacted aggressively to Sinn Féin’s ascent to equality – on 24% – with it in the opinion polls, and he derided its vaunted alternative budget which  would “close down the country” and “result in a 73 per cent cumulative tax rate on workers”, while fulminating “your  promises are completely unachievable”. Meanwhile Cameron has postulated removing the rights of MPs from Scotland, Wales and Northern Ireland to vote on English-related questions so undermining the cherished power of the DUP to prop up Conservative- (or even Labour-) led governments.
Sources in the DUP told Village their relationships with SF has improved. They point out that Robinson and McGuinness are still doing business. They also feel that many in Sinn Féin are in fact committed to the Assembly project.
They have hopes for talks between the parties and the governments. “If the welfare issue is brought into wider talks, then, if there are changes, it is easier to get away with a u-turn in the smoke”, one source said.
Sinn Féin sources are more pessimistic, and believe the Assembly is on a countdown to collapse. They believe the  level of cuts proposed is not viable. However, they “never rule anything out” of the upcoming talks.
Collapse of the Assembly would leave both parties damaged as their rejectionist critics would claim vindication – gold currency in the North. But both parties have achieved a pre-eminence through the  Assembly and furthermore have material stakes in it funding of Members’ salaries and of voracious party workers and advice centres. Ultimately the logic of devolution is compelling for  both. •