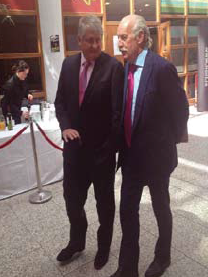 Villager loves Irish offshore billionaires who take on the free press, or preferably own it. Dermot Desmond has gratifyingly extracted an immense and humble apology from the Sunday Times for a 1998 defamation. That year, a Mr Tom Doyle wrote to the Moriarty Tribunal stating that the Irish Financial Services Centre (IFSC) was his idea not Dermot Desmond’s. He stated that he made a formal proposal to the Department of Finance in 1985 outlining a plan for such a centre in Shannon, County Clare. He also expressed concern that his idea was leaked to Desmond who then proposed the creation of the IFSC in Dublin and was rewarded for this with an option to purchase an office block there at a favourable price.

In 1998, the Sunday Times rehearsed these defamatory claims of Doyle. They also pointed out that Desmond had paid significant sums of money to Charles Haughey, who enacted the legislation which implemented the IFSC plan. In 1998 Desmond issued separate legal proceedings for defamation against both Doyle and the Times. The parties exchanged communications regarding those proceedings until October 2000. Desmond took no further action until December 2005, when he served each of the defendants with a Notice of Intention to Proceed, claiming that the delay was on the advice of Senior Counsel and was to allow the Tribunal to issue its report. In 2008 Judge John MacMenamin ruled while there was inordinate and inexcusable delay by Mr Desmond in advancing the action, that the Sunday Times had not shown that the delay had resulted in more than marginal or potential prejudice to the defence. On appeal to the Supreme Court Judge Liam McKechnie considered that the documentary evidence of Doyle was entirely unsatisfactory. Doyle claimed documents existed in 2001 which confirmed his assertion that he had come up with the idea for the IFSC. He could however provide no proof that these documents existed, and correspondence showed that Doyle was not even sure if the documents existed. The Supreme Court upheld the McMenamin judgment.

After that the Sunday Times has caved in, apologised and made a payment to charity.