Village has dutifully profiled the apex of Fine Gael over the last few editions: we have carried cover profiles of Enda Kenny and of the two dashing young pretenders to his position: Coveney and, in the current edition, Varadkar.

Although Fine Gael makes the case that it characteristically swoops in to save the country after Fianna Fáil always destroys the economy, it was nevertheless difficult to put editorial heart into the endeavour. Fianna Fáil is more fun and more mad, the other parties more (though not adequately) visionary; Fine Gael is just the stodgy party of law and order, Europe, property rights, economic conservatism and Irish snobbery.

We should long ago have moved to ideological, or at least ideas-based politics. Village prefers equality of outcome, sustainability and accountability at the centre of its politics but it has more time for those with coherent ideas than those who improvise and betray their confused followers even before they start.

It’s been said that Fianna Fáil is the party of Business whereas Fine Gael is the party of Big Farmers. On the other hand, dating back to John Bruton, Fine Gael has somewhat hazily seen itself as the party of the ‘coping classes’. This has been used as a canopy for unfair or morally-hazardous, populism. Fine Gael’s only grace is that when its certainties are confronted by the realities of modern life, the Irish humanity comes through: so it promoted divorce in two constitutional outings, gay marriage and recognition of the separate ethnicity of Travellers, and it will live with a liberalised abortion regime. Fine Gael always comes around to social liberalism, and usually before Fianna Fáil does. However, where there are public funds at stake its meanness can be very real. Fine Gael doesn’t really get the politics of equality or of Community, or environment. If it did, it’d be another party.

Anyway it’s been a strain giving space to this force, so embedded but so unclear of political philosophy. We apologise for putting readers through over 20 pages of it since February. It’s really so posterity can brace itself or at least have a chuckle.

This is the guts of what we found. 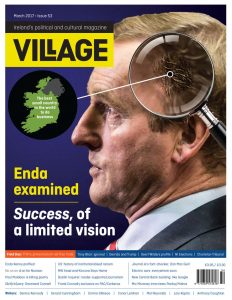 Kenny’s strength has been the economy, though arguably he has like all his predecessors depended too much on foreign direct investment and underinvested in indigenous enterprise, and public services including the likes of Iarnród Éireann and Bus Éireann.

As to whether he made Ireland good – or even the best little country – for business, his stated goal, Forbes Magazine ranked Ireland fourth in the world, as a place to do business, for 2017 so we can concede that Kenny more or less hit his unimaginative target.

Kenny and his governments are likely to be viewed primarily as an improvement over their predecessors which after all were arguably the worst governments in any rich country in history. History will forget his mistakes, his clumsiness and his economic unfairness and focus on the social change under his watch. He has been reasonably competent and dignified, though this magazine had been unfairly sceptical. People like Kenny have kept Ireland safe from political lunacy like Trump, Le Pen and Brexit. 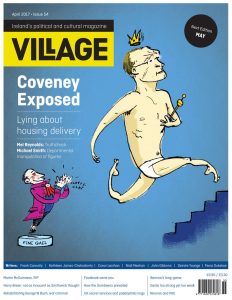 We concluded Coveney’s contribution to Fine Gael is more rural and less economically extreme than that of Varadkar, who is seven years his junior. Unfortunately it remains unclear if Coveney has the imagination or the mettle to deliver real change, real quality of life in his Housing brief: and his deference to the farmers over climate change suggests that he might pander to important vested interests despite the ethical pull of noblesse oblige, if it is expedient: he’s no idealist.

Village has also long challenged the Coveney-led Housing Department’s figures on ‘housing’. Thousands of existing vacant complete homes have been double counted as new completions over the past five years because the Department of Housing incompetently registers ESB connections as a definitive gauge of homes built. The fact is until Mel Reynolds’ article in February’s Village Coveney was content to use the figure of 15,000 completions as definitive when the real number is 2o00 new builds. If you’ve overestimated housing completions you’ve underestimated both how many homes you now need to build and how much change is needed in your approach. And you open yourself to questions as to your nous. 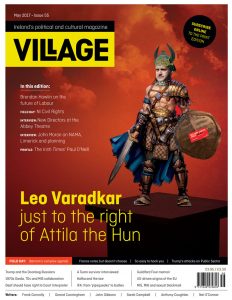 In this month’s edition Michael Smith concludes that Taoiseach in waiting, Leo Varadkar, flatters to deceive. He would skew the economy by reducing taxes in this, Europe’s lowest-taxed country.

Certainly, Varadkar is young and attractive but the undeniable truth is that he has dashed from ministry to ministry leaving little or no policy imprint of substance. There are simply no Varadkar signature policies though he looks and sounds like he should be such a dynamic force. Furthermore he’s presumed liberal on social matters but it is not clear if this is merited.

If either of the leading contenders, Coveney or Varadkar, prevails in the forthcoming leadership election, we are looking at more of the same policy torpor, though for good or bad, with more class. Varadkar might well emerge as a right-wing ideologue.

It would be invidious for Village whose vision is the polar opposite to recommend either of these pretenders for the conservative and incongruous institution that is the Fine Gael party. The pity is that from that platform he will rule the country.