The recent appearance of Michael Fingleton at the banking inquiry served only to reinforce the widespread view that the Oireachtas hearings have done little to elucidate the real causes of the Irish financial collapse.
The former head of Irish Nationwide Building Society accused everyone else but himself and his poor and self-serving stewardship of the institution for its failure and the matter of the €5.4bn it has cost the Irish people.
There was much talk of Fingers’ €27m pension pot (which he managed and accumulated over decades of shrewd investments on his own behalf), his €1m bonus, which he once promised to repay or donate to charity but never did, and the €11,500 watch he received on retirement in April 2009 just months after the Society folded under the weight of its billions in bad loans.
What would have been more interesting would have been an examination by the Committee of Inquiry of his relationships with the developers whose profligate borrowing from INBS contributed directly to the scale of the Irish collapse, the largest of any developed country in post-war history, and with the politicians who let it happen on their watch.
Presumably for legal reasons, Fingleton was not asked about a €1.6m mortgage he personally authorised for former finance minister and then EU commissioner, Charlie McCreevy, in 2006 notwithstanding terms of reference obliging the Inquiry to examine the role of politicians in the banking collapse.
McCreevy received the loan to allow him to obtain a 20-year mortgage to purchase a property at the K Club in Straffan just before the Ryder Cup was held at the luxury Kildare course.
Given that McCreevy had a mansion built for him a few miles down the road by Sean Dunne in the 1990s, for an undisclosed amount, it seems a little extravagant even by the standards of the time to seek a 107% loan on the basis of “minimum paperwork”. It also happened to make a nonsense of the rules of the building society which did not permit 100% mortgages and which had valued the apartment at a mere €1.5m.
At a hearing of the banking inquiry in early July, McCreevy was none too pleased when he was pressed by Labour senator Susan O’Keefe over the fast-tracked €1.6m loan from INBS.
“I don’t know if this comes within the remit of the committee”, he complained. “I was a bank customer”. He said that he applied for and received the loan in 2006, “…a long time after I was minister for finance. I applied for a loan in the normal way and gave normal documentation and it was nothing to do with my time in finance or anything else”.
He was forced to withdraw his claim that the Senator had “sneakily” thrown in an allegation concerning the controversial loan and instead described her question as an “innuendo”.
The terse exchange was in tune with McCreevy’s refusal to accept that there was any property bubble, or at least any during his term in finance between 1997 and 2004, or that he had done anything wrong in his handling of the economy over those years.
The K Club was also the location of another apartment where Sean Dunne had moved his selection of paintings and other works of art from his former Shrewsbury Road home until they were seized last year by court official assignee, Chris Lehane, as part of the developer’s bankruptcy process.
Among the ‘treasures’ found in the vacant apartment was none other than a portrait by Tom Byrne of Dunne’s favourite lender, Michael Fingleton. At the time of the raid, Dunne denied ownership of the K Club property which he said was held in an Isle of Man-registered trust called Traviata.
A painting by Dunne’s sister, Anne Donnelly, of the famous yacht the Christina O aboard which Dunne and his new wife, Gayle Killilea, celebrated their €1.5m wedding was also found among the art works. 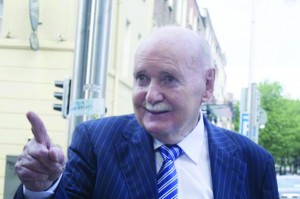 Fingleton, along with a host of other property and political luminaries, attended the lavish wedding in 2004.
In 2013, it emerged that Fingleton’s son, Michael junior, a former INBS manager, was the landlord of a £12m (€14m) office block in England previously owned by Dunne. Dunne bought the property PGS Court in Waltham on Thames in Surrey for £9.3m in 1999 but was forced to sell it in 2011 for a reported £5m.
Two years later the Isle of Man based Kulio (IOM) was listed as owner of the PGS building while Hibernian Capital, of which Fingleton junior was sole director, was named as its landlord on planning application documents.
The property was leased by Kia Motors in 2012 for fifteen years.
The previous year, the father and son hit the headlines when it emerged that Fingleton senior had transferred a sum of €608,498 to Michael junior’s London account from two accounts in Montenegro in Eastern Europe not long after he was hit for a €13.6m debt order from Ulster Bank.
During bankruptcy proceedings in the US in December 2013, Dunne named Fingleton junior as a key player in a deal involving his wife’s company, Mountbrook USA, and Kulio Ltd in which he claimed to have been paid an agent’s fee of €175,000.
Another favourite customer of the Fingleton’s one man banking operation, Sean Mulryan, also gave evidence in July and confirmed his status as a senior member of the elite political and banking circle. He described McCreevy as “a life-long friend” who shared his interest in horses; as was his successor in finance and later Taoiseach, Brian Cowen.
Three weeks earlier, on 2nd July, during his first of two appearances at the inquiry, Cowen was asked whether he had held discussions with any property developers before giving his evidence and he name dropped Mulryan as one he had met casually at a ‘social occasion’ just four days previously.
What he did not mention was that the social occasion was the latest lavish bash at Mulryan’s 18th-Century Ardenode Stud in Ballymore Eustace where the former finance minister and Taoiseach was spotted wining and dining with a couple of hundred guests including 100 Malaysian businessmen flown in for a weekend of entertainment at the developer’s expense.
The three day soiree included a visit to the Guinness Storehouse and a day at the races and the Irish Derby for his visitors, before they were fed and watered at the stud by Rachel Allen and entertained by Riverdance on the warm Sunday afternoon.
During his evidence, Mulryan confirmed that Sean FitzPatrick had attended similar bashes at his home during the good days but denied that this had anything to do with his banking arrangements with Anglo.
Cowen used similar language when he denied the crisis in Anglo Irish was mentioned during his golf outing with FitzPatrick in July 2008 or at a previous function at the bank earlier that year.
He also forgot to mention a meeting in FitzPatrick’s home before the golf round at Druid’s Glen which another witness and influential man about town, Gary McGann, did recall.
Mulryan said that he should not have concentrated his borrowing on Irish lenders but then inadvertently revealed that he could hardly have done otherwise as they were providing him with credit and cash at rates he simply could not have obtained from any responsible financial institution abroad.
Yet we are expected to believe that these attractive rates and access to billions in credit had nothing to do with the personal relationships built up over the years with politicians and bankers. •