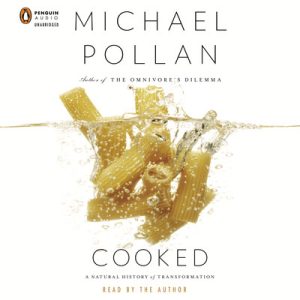 Cooked: A Natural History of Transformation
Michael Pollan
Penguin, New York, 2013
‘before our ancestors learned to cook they would have had to devote fully half their waking hours to the act of chewing. Cooking gave our species an extra four hours a day’
‘Pollan seemed to be saying: “just go to a farmers’ market rather than Walmart and it’ll be ok’

Michael Pollan is the darling of mainstream gastronomy. John McKenna in the Irish Times dubs him the “Martin Luther King of Food”. But the question haunting his opus is whether he simply celebrates a form of bourgeois gluttony or is a genuine radical, intent on shifting the dysfunctional relationship between eater and eaten. Martin Luther King did not go as far in his rhetoric as Stockley Carmichael and the Black Panthers but he remained a committed radical. What of Pollan?
The contradictions within contemporary food production and consumption have been scrupulously explored by Pollan himself in his seminal work The Omnivore’s Dilemma (2006). Foremost is excessive greenhouse-gas emission from livestock production, transportation and refrigeration; and waste. He recognised too accelerating species loss through pervasive monocultures, and horrendous treatment of animals in factory farms.
As a consequence of the over-production of empty calories, especially refined sugars, many children in the West confront lower life expectancy than their parents for the first time since the Industrial Revolution: a global obesity pandemic brings the premature onset of chronic illnesses like heart disease, cancer and metabolic syndrome.

The deterioration in the nutritional quality of food, linked to the decline of home cooking is the subject-matter of Pollan’s latest book.
Research has established a strong correlation between food preparation, or lack of it, and obesity. A 2003 Harvard study attributed much of the increase in obesity in America over recent decades to the ascent of food preparation outside the home: “Mass production has driven down the cost of many foods, not only in terms of purchase price but, perhaps even more importantly, in the amount of time required to obtain them”.
Another 1992 study in the Journal of the American Dietetic Association found that poor women who routinely cooked were likely to enjoy a more healthy diet than well-to-do women who did not. Moreover, a 2012 Public Health nutrition study found a strong correlation between regular cooking and superior health and longevity
Until World War II, throughout the West, women prepared meals in most families. But since 1945 time spent on food preparation in America has fallen by 40 per cent.
This trend was greeted with approval by second-wave feminists like Betty Friedan who viewed housework as a form of oppression. The shift from home cooking was helped by developments in battle-field rations which were seized upon by the food industry. TV provided the perfect medium for advertising these nutritionally-deficient and relatively tasteless offerings. During the 1950s TV dinners became the mark of a proudly modern household.
Pollan is careful to avoid blaming women for this, arguing instead: ‘”men and children need to be in the kitchen too, and not just for reasons of fairness and equity but because they have much to gain by being there”.

In Cooked, as in The Omnivore’s Dilemma, we are introduced to Pollan’s domestic life, especially his filial relationship. But the purpose of the associated homely anecdotes is unclear. Are we supposed to distil universal truths from the bonds forged by the twosome barbecuing a pig’s carcass?
It is useful to derive general lessons from particular experience – as memorably in The Omnivore’s Dilemma when Pollan demonstrates how 19% of US meals are consumed, by bolting a fast-food ‘meal’ in his car at 60 mph. But in Cooked this technique lapses into uninteresting family yarns.
Pollan’s particular skill is to render grizzled cuts of scientific research into accessible reading material for his devotees. Cooked manifests real percipience on the importance of cooking in human evolution. It seems we evolved to cook and find it challenging to live on an exclusively raw-food diet. In one study he cites about the impact of such a regimen, half of the female participants stopped menstruating and most found it difficult to maintain their body weight
He says: “Cooking is by now baked into our biology (as it were) something we have no choice but to do if we are to feed our big, energy-guzzling brains. For our species, cooking is not a turn away from nature – it is our nature, by now as obligatory as nest building is for a bird”. Tartare can only be for special occasions.
According to Richard Wragham, who he quotes at length, before our ancestors learned to cook they would have had to devote fully half their waking hours to the act of chewing. Cooking gave our species an extra four hours a day.

Pollan grapples with the hot potato of meat-consumption. The Omnivore’s Dilemma provided a thorough critique of current farming practices, especially the ubiquity of corn in the food chain. He resolved it by endorsing a model of mixed farming which purportedly involved a co-evolution between man, cattle and grass.
In so doing Pollan offered omnivores virtual carte blanche. Unfortunately, he failed to address the impact of greenhouse-gas emissions or the extent to which meat consumption is damaging to our health as shown by the recent Oxford Vegetarian Study. Pollan seemed to be saying: “just go to a farmers’ market rather than Walmart and it’ll be ok”. However, the expense of nourishing seven billion, or even 300 million Americans on such a diet was essentially ignored.
Cooked is also leery about carnivorousness Although the first half of the book is devoted to barbecuing and stewing meat, a gnawing guilt remains: “Specialisation makes it easy to forget about … the hog that lived and died so I can enjoy my bacon”. Adding: “however scrupulously the slaughterhouse is concealed in the graceful distance of miles, there is complicity”..
He refers to a visit he paid to a Concentrated Animal Feeding Operation (CAFO) as “a place I won’t soon forget: a deep circle of porcine hell” and acknowledges that the pork sandwich he eats is “underwritten by the most brutal kind of agriculture”. The wonder is perhaps that he doesn’t see the centrality of this and that it is self-evident
He attempts to counter his concerns by harking back to Ancient Greece and the Old Testament when “the only time meat is eaten is as part of a carefully prescribed religious observance”, but this is hardly, overall, persuasive for our time.
The central argument of the book is that cooking sustains health but there is paradoxical acknowledgement that barbecuing is problematic since the high heat generates carcinogenic compounds.

The strongest sections are those on sourdough bread and vegetable fermentation. He exalts the ‘staff of life’: “a good-looking loaf of bread declares itself as an artefact, an original, man-made, free-standing object’. He bemoans the extent to which we have adulterated its nutritional qualities, describing the quest for an ever-whiter shade of bread as “a parable about the folly of human ingenuity” because people who eat lots of wholegrain foods “significantly reduce their risk of all chronic diseases, weigh less and live longer”.
He extols the traditional sourdough method of bread production, quoting food chemist Bruce German to the effect that you could not survive on wheat flour alone but you could survive on bread alone, if it is prepared using this method. Traditional sourdough preparation synthesises vitamin and protein compounds and renders its nutrients more digestible, perhaps even to coeliacs.
The Western diet, in particular has undergone significant change in the last century, and one of the most damaging is the absence of live-cultured foods like sourdough bread, sauerkraut and miso.
According to Courtney J Robinson, we need to think about health “as a collective property of the human-associated microbiota”. The hygiene hypothesis “holds that children need to be exposed to more bacteria, not fewer, in order to properly develop their immune system, so that it can learn to accurately distinguish between good and bad microbes”.
We need to replenish our guts with fermented foods but instead we are wiping them out with antibiotics and over-zealous sanitation.
Pollan says beneficial bacteria “have been shown to calm the immune system and reduce inflammations, shorten the duration and severity of colds in children; relieve diarrhoea and irritable bowel syndrome; reduce allergic responses, including asthma; stimulate the immune response; possibly reduce the risk of certain cancers; reduce anxiety; prevent yeast infections; diminish levels of e-coli … and salmonella …; and improve the health and function of the gut epithelium”.
The powerful effects of fermented foods are denied to us by a food industry that seduces with the siren taste of highly-refined foods. Tackling poor diets has emerged since the decline of smoking as the major challenge confronting Western public health. Cooked is marred by a first half that succumbs to self-absorbed stylistic gluttony. Pollan’s willingness to think radically about cultural taboos too is half-baked. But it is a progressive contribution