Budget 2015 was inequitable, with the balance of taxation measures disproportionately benefiting middle and high earners.  Rather than cutting taxes for higher earners it would have been fairer to begin reversing some of the cuts from previous budgets. Reversing cuts in social welfare and public services, especially in the areas of disability and mental health could have been prioritised.
Budget 2015 signals the Government’s clear intention to pursue an economic policy based on a low-tax and low-spend model. This means continuing with low levels of taxation and spending compared to other European countries. Public expenditure and capital investment could have been used as a key driver of economic growth rather than tax cuts.  Budget 2015 was trumpeted as bringing an end to austerity. The reality may be that it is just making it less visible.
There were few surprises in Budget 2015. The Government had publicly set out its plans in broad terms in the lead up to the budget.  The improving macro-economic context and the fact that this is the second last budget before the next general election clearly influenced the decision-making process.
The Department of Finance forecasts a growth rate of 4.7% in 2014 and 3.9% in 2015. On the basis of these growth rates, and other positive news on exports, employment and unemployment, it is predicted that the deficit target of 3% will be reached with some comfort. The Government is aiming for a deficit of 2.7% of GDP, which allowed it to loosen the purse strings by just over €1bn.
Our debt level is still extremely high and it can only become sustainable with strong growth and low interest levels. While both of these indicators are positive in the short term, the medium-term picture is much less clear. This means we should be strengthening public finances and ensuring the economy can grow sustainably into the medium term.
Our public finances remain fragile. A decision to expand the economy through tax cuts is very short-sighted. There is much debate about the level of taxation, especially income taxes, in Ireland but considering the overall level of taxation, Ireland remains a low-tax country. This will be re-enforced by the taxation decisions in Budget 2015. The Nevin Economic Research Institute Quarterly Economic Facts (Autumn, 2014), shows that our overall tax take in 2013 was 35.9% compared to 45.7% for the EU as a whole (Chart 1). 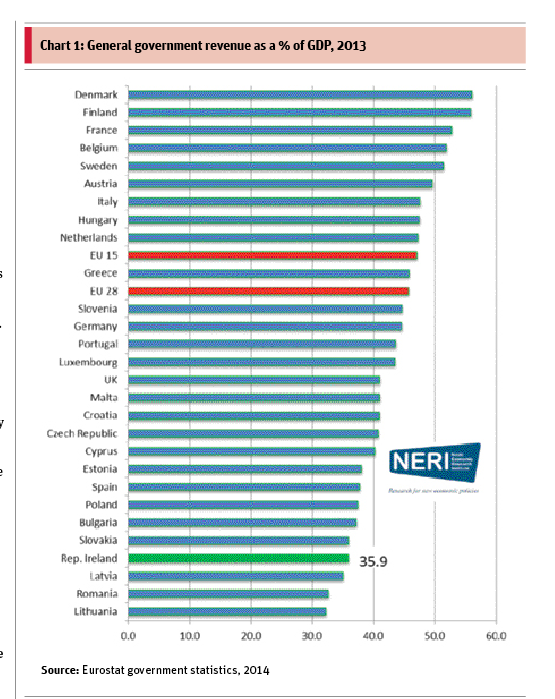 The main taxation and charges measures in Budget 2015 are summarised below:
•    A cut in income tax from 41% to 40% and the standard-rate threshold increased by €1,000. This will reduce the tax take by €405 million (in a full year).  These changes are regressive and disproportionately benefit high earners.
•    Changes in the USC include increasing the entry point to the Universal Social Charge to just above €12,000; reducing the 2% and 4% USC rates by 0.5%, to 1.5% and 3.5% respectively; introducing a new 8% rate for earners over €70,000; and an 11% rate of USC for self-employed income in excess of €100,000 to limit the benefits of these changes for the top 10% of earners.  These changes will reduce the tax take by €237 million in a full year and will benefit most earners.
•    Water charges are being introduced on the basis of consumption which is regressive.  Budget 2015 will give tax relief (€40million), but this will only benefit those earning enough to have an income tax liability.
•    Increases in excise on cigarettes and an extension in betting duty will increase revenue by €78 million.
•    Budget 2015 introduced €80 million in new tax breaks for corporations.  The ‘Double Irish’ will be phased out in 6 years time and a ‘knowledge box’ will be introduced.
Government expenditure is the other side of the budgetary equation. In 2013 our Government expenditure was 42.9% of GDP compared to an EU (28) average of 49% of GDP.  Budget 2015 expenditure measures include:
•    An overall increase in expenditure of almost €640 million which is modest, but a welcome change from the last six years of cuts in spending.
•    Increases in the current spending of €428 million which includes health, education, environment, community and local government.
•    Partial reinstatement of the Christmas bonus for social welfare recipients and €5 increase in Child Benefit.
•    Increase in capital spending of €210 million targeted at education, health, social housing and other areas.
•    The biggest capital spending announcement was a package of measures worth €2.2 billion for social housing  for the next three years, which includes Public Private Partnerships and an off-balance sheet financial vehicle for investment to Approved Housing Bodies.
•    Much of the other spending is aimed at dealing with increased demand for public services as a result of demographics – a growing and ageing population. This means there will be very little by way of investment in these essential public services. 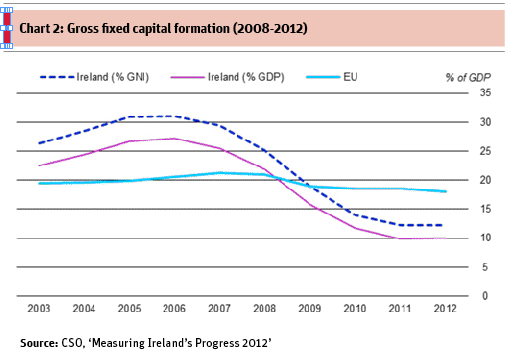 While increases in public expenditure and investment are welcome, the detailed Budget 2015 document shows a planned reduction in public investment (Gross Fixed Capital Formation) between 2014 and 2018. However, the Government plans to increase public investment ‘off the books’ through the Ireland Strategic Investment Fund, which will have almost €7 billion to invest over a number of years. While this will increase the overall level of public investment in infrastructure, Ireland will continue to lag behind EU levels of investment because the current level of investment is almost half the European average (see Chart 2).
The opportunity to borrow money for investment at a time when interest rates have never been lower, and the rate of return would be significantly higher than the cost of borrowing, is being missed.  It is clear that the Government’s priority is to ‘balance the books’ by 2018 instead of front-loading investment to address the infrastructural deficits that may impede sustainable growth and competitiveness in the medium term.
This approach to managing the public finances illustrates the absence of a vision for the economic and social development of the country in the medium to long-term. •