Portentousness is the word that best delineates most Anglo-American literary criticism. The canon seems to demand erudition and a souciant hauteur loaded with the jadedness of the cocktail party. That at least is the tone favoured by the Times Literary Supplement whose reviewers tend to devour books as AA Gill does restaurants. 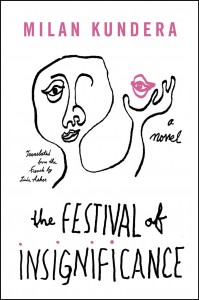 Attending functions when I wrote for The London Magazine (a lesser breed of the same genus) I encountered a few of London’s bottom-feeding literati, one of whom I bitterly recall ordering our entourage wine at a price that tome suggest it adorned the list purely to capture the largesse of a foolish patron. Here one of Dr Johnson’s aphorisms seems apposite: “criticism is a study by which men grown important and formidable at very small expense”. Best to go Dutch at such soirées.

After enjoying without entirely comprehending the Franco-Czech author Milan Kundera’s latest book ‘The Festival of Insignificance’ I noticed a review of it by Michael Hoffman in the Times Literary Supplement. Notwithstanding the mortal risk of referring to another’s review, Hoffman’s excoriation was so venomous that I have been inspired to share my own reaction. His article culminates in the assessment that: “It reads like something one of Kundera’s enemies might have written, and passed off as his”. This was a hatchet job of Viking proportions.

Hoffman wrote that the book reads like something one of Kundera’s enemies might have written, and passed off as his

Before casually dismembering the corpse with the grubby gusto of a journalist on a junket, he dismisses the oeuvre of one of the most original novelists of the last century in surprising, gastronomic terms as: “addictive, moreish, still fresh, thin textured, a little unsatisfying (perhaps that goes with their addictiveness) and obvious”. It was as if Gill had been asked to assess the Nando’s menu.

Perhaps Kundera’s real crime in the eyes of many of the Anglo-American literary elite is to have declared himself a French author, and written a number of novels in that language. With some foundation French culture is now roundly dismissed as decadent and trapped in rehearsal of past glory, although Michel Houellebecq makes a virtue of this. The idea of an unadulterated émigré Czech writer might be far more appealing at least in London, but, like Samuel Beckett, Kundera has found expression in the language of his adopted country, and his work may be more interesting for that fertilisation.

Like all good (it would be hasty to ascribe greatness) writers of fiction, Kundera shines a light on universal human traits. Eschewing conventional structure in favour of fractured tales, readers are left to draw their own conclusions. As in real life, grand narratives are not apparent but overlapping, quotidian sequences. Within that schema he projects ideas that shimmer elusively on eternal truths. This might be the addictive quality Hoffman describes but really what compels are his sublime observations on the human experience, seemingly obvious but actually quite original.
My favourite example remains his exposition on litost, in ‘the Book of Laughter and Forgetting’:
“Litost is an untranslatable Czech word. Its first syllable, which is long and stressed, sounds like the wail of an abandoned dog. As for the meaning of this word, I have looked in vain in other languages for an equivalent, though I find it difficult to imagine how anyone can understand the human soul without it…”.

Kundera expands on its meaning by way of anecdote.

“She was madly in love with him and tactfully swam as slowly as he did. But when their swim was coming to an end, she wanted to give her athletic instincts a few moments’ free rein and headed for the opposite bank at a rapid crawl. The student [the boy] made an effort to swim faster too and swallowed water. Feeling humbled, his physical inferiority laid bare, he felt litost. He recalled his sickly childhood, lacking in physical exercise and friends and spent under the constant gaze of his mother’s overfond eye, and fell into despair about himself and his life. They walked back to the city together in silence on a country road. Wounded and humiliated, he felt an irresistible desire to hit her.…and then he slapped her face”.

Literary criticism is often a platform for the unbridled ego. Kundera’s latest novel attests to the untamed imagination of the author, regardless

Acute awareness of what he does grudgingly translate as: “a state of torment brought upon by the realization of one’s inadequacy or misery”, helps us understand the origin of so much anger and the antidote to it. Kundera turns an isolated word in a minor European language into a near-universal susceptibility. In literature a mark of genius is to make the original seem obvious. We become one with the writer.

Kundera’s most recent work does leave an impression of incompleteness compared to previous more substantial novels but certainly not to the extent of Hoffman’s outlandish assessment. It contains a number of powerful insights: first there is his development of the archetype of the Narcissus that might serve as a lesson to some clever men who cannot understand how an objective of desire resists their advances.
He writes:
“When a brilliant fellow tries to seduce a woman, she has the sense she’s entering a kind of competition. She feels obliged to shine, to not give herself without some resistance. Whereas insignificance sets her free. Spares her the need for vigilance. Requires no presence of mind. Makes her incautious, and thus more easily accessible…”.

The Narcissus on the other hand is not proud:
“A proud man has disdain for other people, he undervalues them. The Narcissus overvalues them, because in every person’s eyes he sees his own image, and wants to embellish it. So he takes care of all his mirrors”.
The Narcissus is thus reduced to a person of little significance, the unlikely partner, his skill like that of a successful spy who gets under the covers almost unobserved. His interlocutor contents herself with that unchallenging proposition. Kundera fails to say if this works both ways.
Like many of his novels ‘The Festival of Insignificance’ meanders. Characters pop in and out without a complete picture of anyone emerging: like the failed actor who along with a friend develops a pseudo-Pakistani language complete with grammatical structure to make his job as a waiter less tedious; then there is a character who for no particular reason tells a friend that he is dying from cancer; we also meet a woman who is saved from suicide and in the process takes the life of her saviour.

Much of the book, especially the surreal closing sequence, defies simple interpretation. Perhaps in his dotage Kundera is simply telling us to revel in absurdity, the main forum of which is joking with friends, confiding at one point “in my unbeliever’s dictionary, only one word is sacred: friendship”. One of his characters says: “We’ve known for a long time that it was no longer possible to overturn this world, nor reshape it, nor head off its dangerous headlong rush. There’s been only one possible resistance: to not take it seriously”. We might consider this a sign of Kundera’s decadence, but for Czechs of his generation humour could be the prolongation of defiance against a totalitarian state.

For, lurking in the background is the figure of Joseph Stalin of whom we gain glimpses, apparently from the memoirs of Khrushchev, though it would not be beyond Kundera to make this all up. Stalin spends much of his time humiliating his entourage especially the unfortunate Kalinin for his own amusement. But he discovers at a certain point: “nobody around him any longer knew what a joke is”. And in Kundera’s view that was “the beginning of a whole new period of history”.

As a Czech born in 19 and living in that country until 1975 Kundera cannot escape that shadow of Stalin. He himself had his academic career impeded in the 1950s. He may embrace his less troubled new home but the memory of that fearful epoch cannot be dismissed. The “whole new period of history” is those decades when lightness and frivolity were lost. Perhaps he’s saying that we must uphold that in the face of all the hypocrisy of today.
In this short book there are many enticing themes. The significance of the sexualisation of the navel – or how humanity is divided into apologisers and those whose instinct is to go on the attack. There is plenty to muse on. Its critical disembowelment is outrageous.

Moreover, it seems perverse for a critic to read the oeuvre of a writer with the intention of devouring it, as a defence council would the prosecution case in a court of law. To earn a living critics are compelled to read a book, view a film or eat in a restaurant, but many turn it into an unedifying bloodsport.
The poet and scholar Kathleen Raine wrote in ‘Defending Ancient Springs’: “The power to perceive the beautiful arises from a quality of consciousness: something forever inaccessible to the apparatus criticus, which can be manipulated by persons who do not possess this quality at all”. She adds that: “At best scholarship, by placing in our hands knowledge which we should not otherwise possess, can fit us to read the works of the poets, to decipher what they have written”. Sadly literary