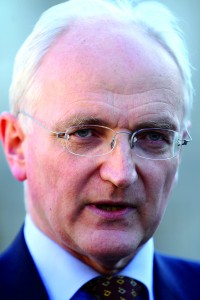 It has been a good few weeks for the new government. The visits of the Queen and Barack Obama exceeded all expectations and that air of excitement and optimism still lingers. Even the charges of plagiarism against Enda Kenny could not dampen the euphoria. The new government has managed to convey a feeling of renewal and revitalisation. Their spin-machine is well oiled and operating at maximum efficiency. So much so that many believe the state visits were entirely the initiative of the new government. When you get credit for things you’re not fully responsible for you know you’re on a roll.
If an opinion poll was held now – and there must be one due – both Fine Gael and Labour would be the beneficiaries of the feel-good factor. Fianna Fáil, on the other hand, may not have yet reached rock bottom and the dreaded decline could continue for a time. This won’t worry Micheál Martin unduly. He is a skilled and experienced operator who knows only too well that the government honeymoon will continue until the budget.
Thereafter, it’s reality time for Fine Gael and Labour and the electorate who placed so much hope in this new administration. They did so on the basis that the incoming government would give the people a better and fairer deal, that they would stimulate employment, that they would burn or at least scorch or singe the bondholders. It is not about to happen. Sure, eventually we will get a lower interest rate but in the context of ten billion a year repayments it won’t make a huge difference. And no amount of spin can hide the fact that growth rates are flat-lining and that the government’s deflationary measures serve only to exacerbate the problem. Éamon Gilmore’s “Frankfurt’s way or Labour’s way” has proven to be not just a diplomatic faux pas but also a major hostage to fortune.
Despite this, the government spin machine has ensured that all ministers stick to the script. You’ll notice a number of lines being repeated. The first of these is that this is a ‘national government’. It is not. Fine Gael and Labour rejected the concept of national government whilst in opposition, knowing full well the prize of government would fall into their laps if they could force an election. Both parties now have an overwhelming – and perhaps unwieldy – majority. They are faced with a shrunken , diverse, even disparate opposition, which they can dismiss as inconsequential if they succeed in branding themselves as a national government.
The second line trotted out by government ministers and spokespersons is that two-thirds of the adjustment has already been made. True, perhaps. But it wasn’t this government that made that adjustment, a fact that won’t be lost on Micheál Martin as he looks ruefully at his depleted and demoralised ranks. Nor will it be lost on government backbenchers. And here’s one from the blindingly obvious department: taking money out of people’s pockets makes you unpopular. This will concentrate the minds of those backbenchers who got the second party seat in a constituency and those backbenchers who did not get ministerial preferment. There are quite a few who see themselves in that latter category.
The third line of spin – and this is the mainstay of government communication – is that fourteen years of Fianna Fáil mismanagement have brought us to this sorry pass, necessitating further austerity measures. It is the line that works best because it has a strong foundation of truth.
Nonetheless, as the new Icelandic government knows, it is not a line you can hide behind forever. Come the budget there will be no more benefit of the doubt. The cosy fireside chats, which pass for radio interviews, will be replaced by more rigorous interrogation. And, yes, the poll ratings of this new government will inevitably disimprove. And who will benefit? The answer is clear – Sinn Féin. They have a crop of new articulate deputies who will target Labour ruthlessly. Like Labour, they are extremely pragmatic and will pursue a strictly populist line that could yield significant electoral success in the coming years.
Can the Labour party withstand that sort of sustained pressure on their left flank? Probably yes, but it won’t be easy. Already, there are indications of some unease on the Labour bankbenches relating to the Richard Bruton proposals for Sunday payments to low-paid workers. Likewise, there were some on the Fine Gael backbenches who were less than happy with the taxes on pensions.
Most significantly, the unequivocal statement by Enda Kenny rejecting any sort of debt restructuring was in direct contradiction of an earlier statement by Pat Rabbitte. Perhaps all of this is simply the creative tension of coalition government, but one thing is certain: the budget will change the dynamic of this government and soundbites and spin doctors will be unable to disguise that.