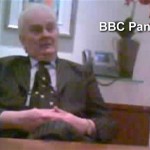 Resigned Lord Laird’s symbiotic relationsip with the Sindo over the years
promoted some regressive causes
THE political demise of Ulster Unionist, Lord Laird, who has lost the party whip after being stung by the Daily Telegraph/ BBC Panorama in the latest ‘cash foraccess’ scandal, may not be as shocking to those who have observed, and been at the receiving end, of his political antics over the years. The good Lord is a public-relations man who has always been alive to opportunities to improve his own finances through his vital political work in the
British upper house as these latest revelations appear to confirm.
Previously, he had been prominent through his role as chairman of the Ulster Scots Agency
which he vigorously promoted as a counterpunch to what he perceived as the ‘Fenian’-inspired
Irish-language movement in the North. His efforts to politicise the language issue did not go
down well with the Scottish language-enthusiasts, or the Irish ones. He also worked as an advisor
to the Loyalist Commission, an assortment of unionists and former loyalist paramilitaries
as they sought to challenge the republican and nationalist narrative during the early years of the
peace process. His elevation to the House of Lords in 1999 provided him with a unique platform from which
to ply his particular brand of politically-loaded propaganda which also happened to coincide with the
interests of some of his clients. In early !&&’, he launched a vitriolic attack on former Taoiseach, Bertie
Ahern, over the latter’s alleged links to former trade-union official, Phil Flynn, then under investigation in
relation to the Northern Bank robbery. Later in the year he abused his parliamentary privilege when
entering into the controversy surrounding the newly-established Centre for Public Inquiry, and
in particular this writer, when he accused it of being an “intelligence gathering operation” for
Sinn Féin. In a remarkable coincidence, both stories had been a matter of considerable interest to the Sunday Independent which then ran lengthy and “exclusive” extracts from Lord Laird’s “privileged”
speeches. Coincidental too, that Lord Laird acted as a paid PR consultant to the newspaper.
In 2002, he provoked the ire of the late Inez McCormack (the first female president of
ICTU) who complained to the UN over Laird’s “misuse” of parliamentary privilege to attack the
Belfast-based human-rights group, Committee for the Administration of Justice, which had a
strong record of revealing abuses by the British security forces in the North.
In 1995, Laird went on to claim in the Lords that there were 200 IRA “sleepers” in high places
in the Republic, a claim that also resonated with the more hysterical outbursts from the Sindo. During
the same year he found himself in hot water when it emerged that while chairman of the Ulster-Scots agency, Laird had spent in excess of £2500 of public money on taxis between Belfast and Dublin.
His penchant for highlighting, under Lords privilege, issues that appealed to the muck-raking
tendencies of the Sindo, and the vibrant reciprocity of Ireland’s best-selling Sunday, must have
seemed like a marriage made in heaven at the time but Lord Laird’s habit of digging ever deeper
holes for himself has prejudiced the relationship more recently.
There was scarcely a peep out of the newspaper in March when Laird defended his client, US businessman Christopher Knight, against allegations of child sexual abuse. Knight did not contest charges in Florida that he had sexually assaulted a victim, then 12 to 15 years old, in 2003. Laird described the allegations as a “minor
misdemeanour”, although he later apologised for his remarks after being rebuked by UUP leader,
Mike Nesbitt. He said the ill-advised comments arose from his “professional association” with
Knight who was seeking to invest in the Belfast Giants hockey team.
It will be interesting to note the response of the Sindo to the televised disclosure that its
favourite peer is accused of seeking £2000 per month in exchange for getting questions raised
in the Lords that could be helpful to the authorities in Fiji.
“I’ll deny having said this, but it’s a bribe….the sort of thing I can say to these guys…you put that
question down now, I thought you were interested in Fiji, would you like to come down to it,
you know, I believe it’s quite nice… I can whisper that”, Laird was recorded as saying to undercover
journalists posing as representatives of the Fiji government.
On this occasion, Nesbitt decided an apology was not enough and, pending the outcome of a
review by Westminster authorities, asked Laird to resign the party whip.