They think the right to life begins at conception and ends at birth.

I grew up in a feminist household where that telling put-down of our American anti-abortion brigade was part of the lexicon. (It was also a Catholic household, but when it came to reproductive rights, as most things, feminism trumped religion). It’s a crude line, but it describes a political right for whom opposing abortion is a priority, top of a list that also includes opposing social welfare and environmental regulation, supporting imperialist wars and the death penalty.

Ireland’s own anti-choice crusaders don’t necessarily match the full spectrum of the stereotype – though they appear happy to take money from those who do. It’s nonetheless hard to stomach their late-breaking concern for ‘cherishing’ people with Down syndrome (DS) and other disabilities, a population they allege to be at risk of eradication in a more free regime for terminations. 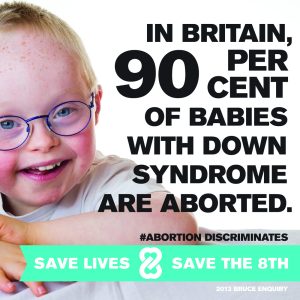 Fact-checking should easily dispose of their arguments. There are the countries like Finland where very liberal abortion laws accompany the highest levels of both rights and visibility for people with DS –- do you remember the punk band, all its members with intellectual disabilities, that represented Finland in the Eurovision? We can’t all be Finns, so how about the UK stats that show prenatally diagnosed DS cases as a proportion of terminated pregnancies actually decreasing? (Yes, there are countries with different attitudes: the point is that abortion laws don’t determine whether a given state, or a given family, chooses to accept or reject the birth of people with serious disabilities).

Recent international history demonstrates conclusively, however, that it’s a mistake to enter any campaign with confidence that truth will prevail on its own strength, to put it mildly. (“Don’t bring the truth to a knife fight”, as one recent analysis put it more bluntly.) We need to talk about how we talk about DS and abortion. And since we can’t count upon the media to hold and host these conversations in a responsible and representative way, we need to sharpen our critical faculties about what we read and hear. We need to do better than the media when we seek to persuade people who profess to care about such issues of the urgent need to repeal the Eighth.

One thing’s for sure: the media wouldn’t print or broadcast the language that came out of one group of mothers of children with intellectual disabilities who found themselves talking recently about the emerging role of DS in the anti-choice campaign. According to a participant who recounted the conversation to me, it sounded less like the school-gate and more like the back-room in ‘The Sopranos’, complete with murderous intent. “Fuck them, the fuckers. What the fuck do they know about it? Every smug fucker that votes to retain the Eighth to ‘save the DS babies’ should have to pay for the upbringing and education of a person with a disability”.

It was good to see Down Syndrome Ireland (DSI) point out in January that people with DS can read and understand the current debate: recent research suggests that four out of five people with DS are capable of a significant level of literacy. But the charity’s implication that they and their families are sensitive souls who should be protected from such discussion smacks of the paternalism that you’d expect from, well, a charity.

“Yes, I feel like I want to keep him away from the TV and radio for the next few months”, a mother whose son has DS told me. “But if the media actually were listening to people with DS instead of talking about them, it might be different”. Instead, they and their families hear the complexity of their lives and choices reduced to pointscoring soundbites, and the whole vast range of age and capacity encompassed by the condition reduced to cutelooking children on leaflets and posters.

‘Nothing about us without us’ – it’s a principle of inclusion and participation that media routinely ignore in relation to immigrants, Travellers, homeless people…It’s hardly surprising, given the challenges, that people with intellectual disabilities are, even in the hands of sympathetic journalists, always a voiceless ‘they’, never part of a vocal ‘us’. (For the record, my ten-year-old friend who has Down syndrome says terminating babies is wrong but governments shouldn’t interfere with people’s decisions. He also says he hates the term ‘special needs’ and wonders what credentials I’ve got to write this article.)

Instead of listening to people with intellectual disabilities, the media turn to charities, generally DSI – a powerful organisation that does a lot of good, including resourcing the speech and language therapies that are vital if many people with DS are ever going to find their voices. But even the best charity is just that: charity.

The disproportionate power of a charity like DSI is part of the problem in Ireland, where the State deliberately outsources so much basic welfare provision that addressing the needs of people with disabilities becomes a matter of ‘kindness’ and ‘cherishing’, rather than of hard-won human rights that the State must vindicate. The media complete this vicious circle of ‘care’ when they confer authority on charities, who often brilliantly take up the State’s slack, but whose existence depends on the maintenance of this outsourcing model.

As the recent story of ‘Molly’ and her foster family demonstrated, life for people with disabilities and their families can be hard, costly, devastating for personal and working lives. Being forced to negotiate the largely unaccountable bureaucracies of charities, along the bewildering border with the barely accountable services of the State, to get physical aids, educational materials, assistive technology, appropriate food – you name it – makes it even harder.

In that context, even well-meaning commentators can sound patronising. Fintan O’Toole’s mostly admirable column on DS and the coming referendum campaign pointed out, superfluously, that “most people with DS can live happy and fulfilled lives”. True, perhaps, but so what? What does that implied ‘happy and fulfilled’ threshold even mean? I don’t know if my life is up to the H&F mark, nor would I impose it on anyone else’s, especially someone encountering so much social prejudice and material injustice.

Years ago I worked with the late Martin Naughton, who had muscular dystrophy. His life was a struggle, and he knew that to achieve the independence he sought for himself and others, he would have to fight, demand, and be, frankly, a pain in the arse, dragging people with him kicking and screaming, if necessary. Happy and fulfilled wouldn’t be the words that come to mind – not for him, not for many activists I have known – but his life of struggle was brilliant, exemplary, substantial. ‘Happy and fulfilled’ sounds to me like the charitable-sector equivalent of ‘useful and productive’, that blatant imposition of capitalist logic in measuring a worthwhile life.

If talking about DS and other disabilities can teach us anything, perhaps it’s to reject those logics, to stop measuring, to respect and embrace human variety and build societies that do the same. That includes the variety of ways a woman responds to pregnancy. Some Irish women are already choosing to terminate after a prenatal diagnosis of DS. Repealing the Eighth will mean they can do so in less of a climate of fear and secrecy. The next step will be to ensure that the choice is not informed, as it is today, by knowledge of how terribly this society treats people with DS and their families.

When that time comes, people in Ireland with DS will no longer be regarded as lesser beings requiring only ‘care’ – which will rightly be seen, as it is for other people, not as an end in itself but as a means to the end of full and equal humanity. And they’ll exercise their fully human rights, including their right to sexuality and control over their own reproduction.

Harry Browne is a senior lecturer in the School of Media
at Dublin Institute of Technology and co-ordinates the
Centre for Critical Media Literacy there.