The discussion on Marian Finucane’s radio show (Sunday 25 May) had turned to the financial troubles of former billionaire businessman, Tony O’Reilly. It was, said regular guest Stephen O’Byrnes, a kind of a tragic story. Michael Smurfit had bemoaned the tendency in Irish society to delight in seeing Tony O’Reilly brought down. O’Byrnes disagreed with Smurfit’s analysis, only to be interrupted by an indignant Finucane. “I mean, people take glee in so-called rich people’s misfortune’’, said Marian, perhaps not sure that O’Reilly qualified as rich.

Finucane is one of RTÉ’s top broadcasters. RTÉ states that her Saturday and Sunday shows are the third and fourth highest ranked programmes at the station after Morning Ireland and Liveline, claiming figures of 376,000 listeners on Saturday and 360,000 on Sunday. While more people are free to listen to the radio on Saturday and Sunday mornings than weekdays, the competition is also robust: Finucane’s show from 11am to 1pm competes with PR man Anton Savage’s ‘Savage Sunday’ on Today FM and Shane Coleman’s ‘The Sunday Show’ on Newstalk. They all follow similar formats and it’s not unknown for guests to appear first on one show and then on another on the same morning. These Sunday newspaper review shows are a staple of Irish broadcasting: less frenetic than weekday shows, and less-driven by the news cycle; the Sunday papers themselves are more reflective than daily papers, and more given to analysis and commentary.

Few listeners want to hear screaming matches on Sunday mornings, but Sunday shows can easily become insufferably smug and Finucane’s show often sounds like a long expense-account lunch at the Unicorn; just a little bit sautéed Dublin Bay Prawns with White Wine, and only a hint of garlic.

When community radio stations run training courses, they teach journalists to talk to “people on the ground”, recognising that the voices of ordinary people are rarely heard on the radio unless they’ve suddenly become newsworthy because they’ve been the victim of a crime. The community-radio approach is not found on national radio, as professional training teaches journalists to seek out authoritative voices, particularly people who speak for others: politicians, fellow journalists, and spokespeople for causes or movements; otherwise they favour experts in their fields such as doctors or legal professionals. It’s an almost unconscious pattern of privileging upper-middle-class voices. If voices from the street make it on to national radio, they’re normally confined to vox pops where they’re offered a few seconds to comment on a current story.

Village took a look and listen back though one year of Marian Finucane’s Sunday show, focusing on the newspaper-review hour. Finucane’s panel invariably consists of five guests, and typically features two journalists, a politician, a barrister or solicitor and someone from the business or charity world. How do the panels break down by profession (and it is almost 100% ‘professionals’)? From roughly 255 guests over one year, around 90, or slightly over one third, were women. Journalists and broadcasters (74) are the most frequent guests, followed by politicians (36), PR professionals (28) and legal professionals (26) such as solicitors and barristers. Close on the heels of legal professionals are academics (25) and businesspeople (18), with smaller groups of less than ten people from the charity sector (8), security analysts (5) doctors (5), economists (4). Creative writers (5) and actors (5) make up the rest, along with a dozen guests who don’t fit into any of the above categories, for instance Philip McCabe of the Citizens Information Service and Garda whistleblower John Wilson. Several guests appear regularly, though no one appears on the show more than once every three months.

With journalists making up almost one third of the guests, we’re immediately plunged into the fatuous incestuousness of a broadcast journalist inviting fellow journalists to interpret the work of other journalists.

As the market leader in Irish newspapers, Independent News & Media provides the most journalists, followed by reporters from the Irish Times and then journalists from RTÉ itself. The next most popular guest category is the politician, and the newspaper panel is a nice soft gig for politicians. It’s a chance to appear on national media to pontificate on matters of current interest as an expert of sorts without having to deal with matters of policy.

Yet it’s the overweening presence of PR people and lobbyists that begs the question: why are professional spinners being invited to interpret the news for us? There’s no question but that they are doing their job superbly just to be getting themselves onto the show and, short of writing the news stories themselves, they couldn’t have a better platform for their clients. The symbiotic relationship between politicians, lobbyists and journalists is normally played out away from the public gaze but in this case its oppositional aspects are allowed to play out in public.

Close behind the voices of the PR experts, we have the well-upholstered and soothing tones of barristers and solicitors. Again, one wonders what particular talents belong to the legal profession that makes them such good interpreters of our weekly news?

Of course PR people and lawyers spend most of their time representing the monied classes – vested interests. They rarely declare those interests, but even if they did, the question arises whether the professionally articulate agents of monied interests have a place over our breakfasts at weekends.

Less well represented professions include artists and writers: doctors are prominent, but nurses are invisible. Farmers, hairdressers and housewives don’t feature. The voice of union representatives is faint; the opinions of bus drivers or shop worker on matters in the papers go unheard.

The veteran broadcaster has taken pay cuts in recent years. She earned €492,000 in 2011 for four hours of programming each week but in 2012, her earnings from RTÉ were set at €295,000 per annum, paid to her independent production company, Montrose Services Ltd. She has justified her value by claiming to be on research duty around the clock. Marian’s blind spot on matters of popular culture deflates this claim somewhat and the rarified chirpiness of the newspaper panel pipes down when it comes to mundane matters. At the end of the show devoted to the recent local elections, Marian and her team bestowed the last few minutes to popular culture, perhaps trying to prove that they were down with the kids.

She, it may be heresy to point out, is not beyond inarticulate twittering. Listen hard some time:
“How about that popular band One Direction? What did people think of them?”.
“It’s pretty nice music”, volunteered one guest.
They were nice, agreed another, unlike that American girl.
“Siley… eh… Siley?”, he pondered, trying to recall the name of the pop princess. “Miley Cyrus. She wasn’t nice”!
“[One Direction] are a phenomenal force in politics”, continued another guest, getting confused.
Marian meanwhile was belatedly arriving to the cultural phenomenon that is Kim Kardashian, who had married hip hop star Kanye West the previous day.
“I had never heard of Kim Kardashian. Ever!” Marian marvelled. “But she hired Versailles for her wedding! She’s wearing three gowns worth about $6 million each. She’s staying in some fabulous palace in Paris… Mama Mia!”.
“She had her own show called ‘Keeping up with the Ka-shard-ians’”, added Mary Murphy – a Village contributor – helpfully.
“Kar-dash-ians”, corrected another guest.
After a few minutes of flailing around in pointless celebrity, Marian bade goodbye and promised to be back the following week in the more comforting realms of politics – where lobbyists, spinners and barristers can tell us how to read the news, as well as what it should contain. 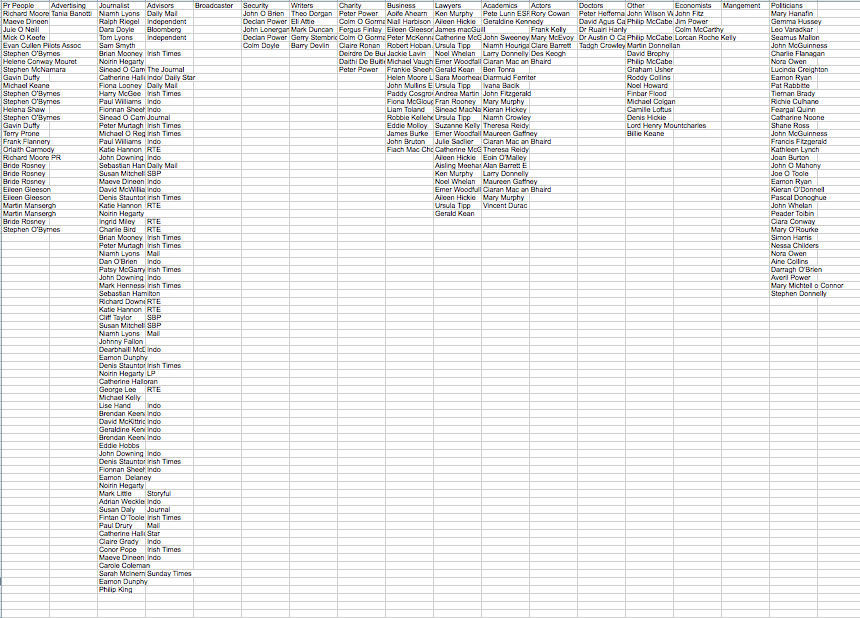