Nama was inevitably going to be controversial. Set up to acquire loans from the Irish banks that had recklessly provided the finance for an almighty property boom and needing to be rescued when the inevitable happened, Nama was the vehicle created to work through getting some of the money back.

In 2009 the property market in Ireland had more than crashed, it had ceased. With no credit available from broken banks , many businesses in existential trouble and incomes squeezed by higher taxes and government cutbacks, a shock hit the economy denuding the resources and confidence needed for property transactions. The concept behind Nama was to take the time to deal with the property issues and avoid all the collateral supporting bank loans becoming valueless in a market with no buyers. Time and a structured approach would allow the physical property assets backing the toxic loans to be sold in a recovering property market and mitigate losses. 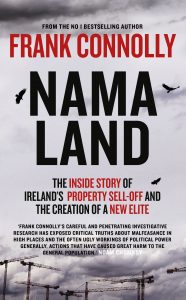 So called ‘bad banks’ had been established elsewhere in the wake of property busts but nothing on the scale of Nama.

If the market was to get going again to facilitate this strategy, it would need brave foreign investment. In crisis there is always opportunity for some, and there are organisations whose very reason to exist is to exploit misfortune. It was Nama’s job to create the conditions where these organizations could come to Ireland and buy.

In a great read about what happened as Nama did the necessary, Frank Connolly’s book ‘Namaland’ [Gill 2017: €16.99] does a good job of telling the story so far.

Connolly states in the introduction that it did not work as planned and the book sets out to show that. Nama is seen as a secretive defensive organisation with an unwillingness to allow a sufficient degree of scrutiny, and there is a sense that it therefore must be hiding skeletons.

Secrecy was always going to be part of the Nama story however, and no account could be as revealing as many who buy this book in the hope of exposures would like.

Lending agreements are confidential and borrowers are entitled to their privacy even when loans are distressed. The business of Nama was inevitably going to be veiled, and full transparency was never going to be a feature of the deals Nama did. This in itself created a suspicion and a curiosity.

Using journalistic sources Connolly has provided the reader with a coherent narrative often focused on individuals and their interactions; deals were done transferring fortunes to funds with names like Cerebus and CarVal that have become familiar to us all. Clearly Connolly did enormous research and a great job of putting together a comprehensible chronicle of events along the way.

In my view, Nama and those who worked there, with what I think are very few exceptions, come out of all this pretty well; it could have gone very badly.

There was the danger that Nama could have been a blanket for indigenous cronyism with its power and resources used to enrich insiders and the connected. This book does not make the case that this is what happened. A grave danger for Ireland at the time of the creation of Nama was that foreign funds would come to see the property market in Ireland as being rigged for insiders and political cronies. Certainly the size of Nama relative to the market was an issue. A functioning and transparent property market was needed to speed recovery, and Nama made a significant contribution to recreating a vibrant market in Irelandwhich in turn helped speed the recovery. This is why Nama was set up, and the recovered market is testimony to it having worked much as intended.

Connolly’s coverage of Project Eagle and the dealings around it is very interesting. Some of the players on the fringes of Nama in the North are shown in very poor light and certainly there are questions there. The nexus of real estate, serious money, business and politics in a small and uneasy area such as Northern Ireland is covered extensively. Local politics can be troublesome for big funds and certainly they were something of a minefield for Nama.

The story of Nama is not yet over. In some years it will be examined by serious academics from both a political and financial perspective. I think it will come to be seen to have done the job it was set up to do. By any standards it was an enormous and difficult organization to operate. People working in Nama must have been under very great pressure and were certainly not popular, often wrongly seen as property market insiders with comprised intentions.

If anything, this book will help readers understand the complexity of what was done. Nama was not inevitable and nor was it the only way toxic loans could be dealt with. It was a political choice. We can never know if another approach would have been better. We do know that the property market recovery was quicker than most expected. Certainly Nama made a contribution to that.