Leo Varadkar consistently asserts that he does not believe in equality of outcome but in equality of opportunity. He sees himself as “right” or “either centre right or a higher class of liberal… somebody who believes in personal freedom, someone who believes in a political economy and in a free market as the best way to create wealth”.

He wants to lead a party, and we infer a country, for “people who get up early in the morning”.

His highest-profile initiative came in late April, when as Minister for Social Protection he launched the fractious ‘Welfare Cheats Cheat Us All’ advertising and online campaign. It aims to encourage the reporting of suspected fraud to the Department of Social Protection anonymously.

The image Varadkar, who was always going to win anyway, cultivated in his long tilt at the Fine Gael leadership is that of champion of equality of opportunity, liberalism… the right… those who get up early in the morning and aren’t part of the class responsible for welfare fraud. But above all Varadkar speaks the language of markets.

However, the markets are a dead end.

Neoliberalism is defined as “a modified form of liberalism tending to favour free-market capitalism” (Oxford).

Like Scientology or some of the madder dogmas of religion, it is pseudo-science or bad science and it has been, as we shall see, comprehensively discredited. But this is too tart. Of course it has been discredited, but its hold on us grips our lives still, grips our incoming Taoiseach.

So let us try and whisper in the world’s ears, and in the ears of the Taoiseach, why it is wrong and dangerous and pushing us to the edge.

For a start there are better economic theories. John Maynard Keynes was in Saul Bellow’s phrase a man of “clairvoyant intelligence”. Keynes was prophetic in his great work ‘The Economic Consequences of the Peace’ that predicted that the dire economic conditions forced on Germany after the war would lead to its economic collapse and political upheaval throughout Europe. It resonates in our times. 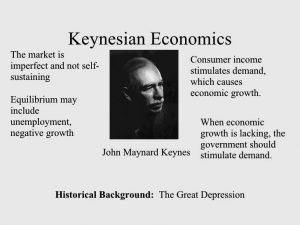 Keynes’ ideas fuelled recovery after recovery after the mistakes which followed 1929. Recovery was needed after the market was shown in every instance to be deficient in providing macroeconomic efficiency, let alone broader societal goals.

Keynes argued that aggregate demand determines the overall level of economic activity. Inadequate aggregate demand can lead to prolonged periods of high unemployment. Keynes advocated the use of fiscal and monetary policies to mitigate the adverse effects of economic recessions and depressions.

Time Magazine has said of Keynes: “his radical idea that governments should spend money they don’t have may have saved capitalism”. Keynes himself was reportedly disparaging about capitalism itself: “Capitalism is the astonishing belief that the nastiest motives of the nastiest men somehow or other work for the best results in the best of all possible worlds”.

The stagflation of the 1970s with the shocks to the Keynesian system generated by oil prices opened sowed dissent. Keynes fell out of fashion with the stranglehold of unionism and welfarism and the imposition of socialist dogma. It created ‘a market’ for the work of the Chicago School and trickledown economics characterised by fetishistic privatisation, deregulation and the elimination of State subsidies. In the late 1970s much of this made superficial though never profound sense. The market may have seemed like a score counter that could be tamed for human purposes. No longer. It is the recipe for inequality leading to intolerance.

After the Depression which started in 2007, Keynesianism actually underpinned some of the measures implemented in some countries – notably by Barack Obama and Gordon Brown in the US and UK. This was not the case in most of the world, particularly in Germany, which has learnt, and insisted that others learn, the wrong lesson from its own hyperinflation-driven catastrophe – or the EU, including Ireland which was an incubator for austerity.

But it is Greece that was the laboratory. When the Greeks decided the ignominy was too unfair and pointless and elected a government firmly opposed to the hopeless conditions imposed upon them they were forced into an astonishing U-turn to accept further self-destructive bailout packages. Not even the IMF thinks that Greece can comply with these terms and successfully pay back its debt, especially when coupled with crippling austerity conditions. The latest figures show Greece’s debt stands at 179 percent of its gross domestic product, or about €315 bn.

Naomi Klein in her bestseller ‘The Shock Doctrine’ analyses the growth and development of Neoliberalism across the world. An economic paradigm dubbed by the author ‘disaster capitalism’. Klein particularly homes in on how these crises and others are used to justify further disaster prescriptions. She quotes Hayek’s mate Milton Friedman:
“Only a crisis – actual or perceived – produces real change. When that crisis occurs, the actions that are taken depend on the ideas that are lying around. That, I believe, is our basic function: to develop alternatives to existing policies, to keep them alive and available until the politically impossible becomes politically inevitable”.

This describes the Greek decade.

Moreover, Neoliberalism has contributed to the world order approaching a collapse at a startling velocity. As shown by Thomas Piketty decades of inexorably widening inequality lead to economic instability and social unrest. Trump, Le Pen and Brexit are the predictable fruits. Racism, sexism, xenophobia, intolerance, anti-environmentalism and disdain for the truth are their imperatives and their currency.

It isn’t hysterical to fear that the end of human civilisation is glaring us in the face while most people look away. Established parties of government in nearly all major countries have subscribed to the Neoliberal agenda and merely quibble about its implementation. A wild ballet of madness.

Neoliberalism’s imprimatur for austerity has ineluctably led to social instability and fragmentation, the destruction of pension and welfare entitlements, poorer and often more expensive health care, homelessness, evictions and the corralling of our world into the very rich, and the rest.

The ineluctability comes from its focus on competition and on the short-term, and its failure to address externalities including social, environmental and cultural externalities.

If you aim to address certain issues and ignore others, and you are successful, you will ultimately tend to see the ascendancy of what you emphasised (competition) and the demise of what you downplayed and trivialised (undesirable externalities). Keynes recognised this, looking forward to the day “when the economic problem will take the back seat where it belongs, and the arena of the heart and the head will be occupied or reoccupied, by our real problems – the problems of life and of human relations, of creation and behavior and religion”. How far we are from that in 2017 resurgent Ireland!

The rise of inequality as the overriding issue of our time has tended to supersede the relevance of what has been the primary indicator of this inequality – class. Inequality in multiple forms including sexual, gender, racial and economic has impinged on the centrality of the Marxist analysis of a working class that is exploited – essentially a social analysis. Apart from anything else the middle class too is under pressure. Meanwhile democracy and national sovereignty are moribund as the very rich through corporate legal and accounting firms and multinational corporations control and run the world.

Privatisation and deregulation have corroded democracy and basic human decency.

Privatisation takes many industries that were formerly under public ownership into the hands of unaccountable corporate monoliths to make easy money out of natural monopolies, free of healthy competition.

Deregulation removes obstacles to business many of which are intended to achieve human goals.

The marketisation of human activity and needs erodes the humanity in our society as our actions are reduced to transactions between self-interested actors. Consent here is nugatory; for the playing field is not level. It is a sure route to the serfdom its sponsor, Friedrich Hayek, purported to revile.

Neoliberalism is not classic Whig liberalism which in certain forms can converge on egalitarianism. It is not in favour of the rights of the little person. It does not even protect small or medium-size holdings and businesses but seeks to crush them. Any commitment to liberty is merely tenuous and the liberty of the market conduces to the concentration of wealth in the hands of the few as individual civil and political liberties are a dangerous threat to the status quo. Political dissidence is discouraged.

The dark forces of Neoliberalism have proved very powerful indeed.

The 2007 implosion has been blamed on irresponsible spending on welfare, healthcare, and feckless immigrants – rather than the casino capitalism of the financial sector.

Being right is one thing; communicating it is much trickier. Neoliberalism also specialises in post-truth disinformation.

Donald Trump is an exponent, albeit a confused one.

Some derive satisfaction from the crumbling of the Far Right after its losses in a number of elections in Europe culminating with Le Pen’s defeat to the centrist Macron; but note the narrow margins and how Hindenburg at first defeated Hitler. There is an historical inevitability to the rise of the Right in our time.

So… the political establishment and its corporate paymasters can waffle on about our economic progress over the last few decades but statistics do not lie when they measure several decades of stagnation of real wages in the US, despite ever improving productivity, while globally they have collapsed in the last ten years. If there is growth – as in Ireland in the last few years – it is growth for big business and the richest, what Naomi Klein has called the Corporatocracy.

In fact all the evidence indicates that where there is growth and stability it is in social democratic countries that are Nordic or Middle European. There is a tangible link between Keynesian economics and sustainable redistributed growth. Neoliberalism does not generate sustainable growth and in any event does not provide for its distribution. In effect it is a recipe for less human welfare, less good for the greatest number.

For those who remain sceptical as to the nature of the problems and indulgent of the status quo for the comforts it brings them it is salutary to dwell on the essence of where we are now. When working out whether we live in a socialist or capitalist epoch it is salutary to consider the framing by Nobel Prize winning economist Joseph Stiglitz of the bailout of the rich to the detriment of the poor as “Socialism for the rich and Capitalism for the poor”.

Milton Friedman claimed, no doubt with Varadkar, that the society that puts equality before freedom will end up with neither. In fact the society that puts freedom, or its correlative equality of opportunity, before equality ends up with precisely what globalised capitalism has yielded the last generation: Cascading inequality, intolerance, xenophobia; and ignorance and the rise of its agenda.

Enda Kenny was no ideologue; he became an agent of austerity but, crucially, it was never clear what he would have done in better economic circumstances. The evidence suggests he was a pragmatist with a Centre-Right bent.

Varadkar is an ideologue less likely to embrace the pragmatic. He ideologises for the precarious and dangerous status quo which privileges the wealthy and disdains the disadvantaged. He will be out of kilter with the electorate that will determine more of his fate than the Fine Gael party: the Irish people. As we emerge from depression and austerity, Neoliberalism, especially in the hands of one as politically adroit and shiny as Varadkar, is a retrograde anachronism.

David Langwallner is Professor of Law in the American University, Prague and a practising barrister; Ben Harper is a Prague-based writer.