During 2015 in Ireland there were 49,689 applications to the family law courts in the context of relationship breakdowns. This indicates a high level of contentious separations and divorces exposing children to ongoing conflict between their parents.

One emerging phenomenon currently facing social, legal and mental health practitioners is that of a child or children strongly aligning themselves with one parent while rejecting the relationship with the other despite having had a previous loving relationship with that parent, either mother or father. The primary behavioural symptom is the child’s refusal to have contact with the alienated parent. The behaviour of the child includes a persistent campaign of denigration against the alienated parent and weak, frivolous and absurd rationalisations for the child’s criticism of the alienated parent. This phenomenon is referred to as parental alienation.

A frequent critique put forward is that the dynamics of parental alienation are not recognised. But it is important to note that in fact these dynamics have been independently noted and documented in the empirical psychiatric and psychological literature since the early 1950s.

More recently, the current edition of the Diagnostic Statistical Manual 5 (DSM) has included a number of terms that contain the spirit of parental alienation such as “child affected by parental relationship distress”, “parent-child relational problem”, and “disruption of family by separation or divorce”.

Studies have concluded that there were elements of false or negative ideas about the other parent in eighty percent of the 700 divorces studied5. Further studies have demonstrated that the vast majority of parents were considered at a minimum, to be naive alienators while at the other end of the spectrum there were obsessed and active alienating behaviours in an effort to damage and terminate the child’s relationship with the targeted parent.

Practitioners are increasingly being faced with angry and distressed children who strongly insist that they do not want any contact with a previously loved parent in the context of a high conflict separation or divorce. The child may react aggressively toward the targeted parent by kicking, punching or spitting at him or her. The names of Mum or Dad are replaced with him, her or it. They may destroy property belonging to the targeted parent. They may suddenly and completely shun the targeted parent and his or her extended family including grandparents, uncles and aunts in public. 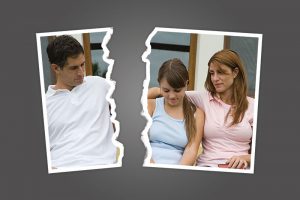 The child may offer scripted responses using adult language to justify their rejection of the targeted parent and make allegations of neglect and abuse. They deny previous positive experiences with the targeted parent, say that they do not remember them or that they were just pretending to be happy at those times.

Some examples of the reasons for parental alienation offered by children include “she treats me like a slave” (10-year-old female) when explored further, she went on to say, “She makes me empty the dishwasher” and “she makes me tidy my room and put my clothes into the wash basket”. It is striking that these seemingly ordinary reasons are used to warrant such an extreme response from the child, however, in high-conflict divorces events can take on alarming new meanings. In another case a 9-year-old boy presented with fourteen written pages of reasons as to why he hated his father and did not want to see him again, while another 11-year-old female stated: “Under Article 12 of the United Nations Convention on the rights of the child I do not have to see my mother if I do not want to”. Some children present with more serious concerns about themselves and their safety such as “I am in fear of my life”, “I fear for my safety”. Thus, the clinician may find themselves obliged to report and/or investigate such allegations.

It is important to acknowledge that some children do indeed reject a parent for what can be considered normative reasons such as abusive or neglectful parenting. This is considered realistic estrangement and is not to be considered alienation whereas, an alienated child is described as expressing freely and persistently unreasonable negative beliefs that are disproportionate to the child’s actual experience with that parent.

It is crucial to be able to differentiate true estrangement from parental alienation.

Therefore, unless there is compelling evidence to investigate or there has been proven sexual, physical or emotional abuse children should be strongly encouraged to have contact with the other parent in order to preserve the relationship into the future when the child may be feeling less angry and upset. When it comes to decisions regarding custody and access it is important to recognise that joint custody is usually in the child’s best interest when both parents are fit to parent.

Therefore, it is crucial to look behind the statements of a child who seeks no contact with a previously loved parent rather than simply accept a child’s strident rejection at face value as somehow being a negative reflection on a parent’s parenting capacity or competency.

The aligned or alienating parent may present as disempowered regarding contact with the non-resident parent stating, “what can I do if my child does not want to see him/her”? Paradoxically, this same parent will present as very much empowered in all other aspects of the child’s life.

False allegations of abuse and neglect in contact disputes

The contemporary literature provides us with numerous examples regarding the prevalence of false allegations of abuse and neglect in this context. These studies demonstrate 70 per cent of cases where false allegations of neglect and abuse have been identified. Other researchers found that both mothers and fathers are equally likely to make unfounded allegations. Fathers have been found to primarily allege neglect whereas mothers have been found to primarily allege sexual abuse.

One 10-year Canadian family law study found that the participants secretly wished that professionals would not believe the denigration that they presented with towards their targeted parent as children.

The reader is invited to consider that this is not about fathers’ rights or mothers’ rights but rather about the child’s rights to have a meaningful relationship with both parents.

Brian O’Sullivan is a Systemic Family Psychotherapist in private practice. He earned his Master’s Degree from the Family Therapy Training Programme at the Mater University Hospital Dublin. He is a lecturer on accredited undergraduate and post graduate degree programs MES in psychological theory and therapy. He has completed the only Irish qualitative study regarding parental alienation. brian@changes.ie.