With po-faced pomp the Government has launched its mutli-annual fiscal programme, aspirationally titled ‘The Spring Statement’. A lengthy, over-manned delivery of the programme required the strenuous efforts of a score of  civil servants, economists and two ministers to energise the public imagination. Yet, for all this effort, it smacked of the vintage 2002 “A Lot Done. More to Do” election slogan of Bertie Ahern.

The strenuous efforts fizzled out before the speeches started, for the Spring Statement sounded like self-congratulatory pre-electioneering loaded with promises of the future that rely on a heavy dose of hope and faith, rather than sound fundamentals.

The political timing was good as there is Spring in the air, in public perceptions of the economic recovery. But there is still an arresting chill in the way households are feeling improvements in their own lives. Energising people to buy into a new economic plan in such an environment requires two things: strong vision and focus on reality.

Both were lacking in the Spring Statement.

Ignoring the reality that the state continues to borrow to fund its liabilities, there were promises of pay rises for public-sector employees and tax cuts for working people. All underwritten by growth forecasts that were driven by an optimism not seen since the days when a soft landing in the property sector was still showing up in the Department of Finance’s tea leaves.

The growth and recovery bit in the Spring Statement was a sort of comic relief that none of us really needed and few of us really enjoyed. It was also nauseatingly predictable: we’ve heard this song so many times in recent years. Based on Department of Finance projections,  the Irish economy is expected to grow on average by 3.4% annually between 2015 and 2020. To make things sound more plausible, the Department referenced in its projections the IMF forecasts from October 2014. Alas, a couple of weeks before the Spring Statement publication, the very same IMF came out with revised forecasts, putting Irish real GDP growth at an average of 2.9% annually for the same period. The difference between the two forecasts amounts to a not insignifcant 3.2 percentage points over the 2015-2020 period.

Differences in forecasts aside, the Spring Statement is projecting growth in Ireland to shift away from exports toward the domestic economy. In line with this, the Government is expecting investment to rise 15.3% in 2015, 12.1% in 2016 and on average by 8% annually between now and the end of 2020. Domestic private consumption is expected to grow at 2.4-2.5% in 2015-2016 and at just over 1.3% annually for the rest of the period.

Strangely, all of this growth is going to happen without anything new happening in the economy generally. Those who traditionally generate demand for new investment and the supply of goods and services – entrepreneurs – are simply absent from the entire document. Another engine for domestic growth – SMEs – is mentioned only in passing, in the context of already published plans. 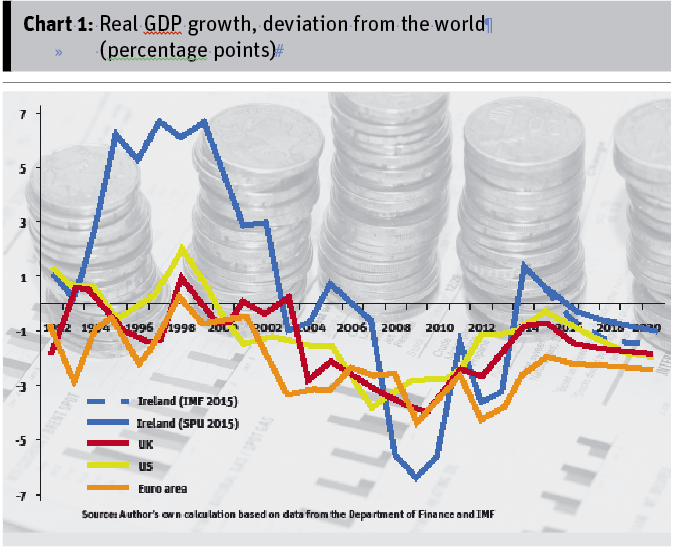 Trending alongside the entrepreneurs, the self-employed also got no mention in the documents, except for one instance referring to the timing of tax receipts. The fiscal-fodder class – part-time workers, sole proprietors and the self-employed – are simply not considered worthy of Government attention, for their votes can be easily coerced: any alternative to the political status quo would mean only higher tax burden on them, so there is little option but vote back the existing mediocrities.

The only growth-focused vision in the Spring Statement ended up in the Annex to the document. Instead of offering anything new it simply rehashed the already published National Reform Programme of 2014, and Europe 2020 targets that focus Government pro-growth agenda on yawn-inducing “areas” of “improving active labour market policies”,  which entail “reducing costs and improving the efficiency of legal services”, while targeting “employment, R&D, climate change and energy, education and poverty”.

In short, there is nothing new, nothing tangible, nothing that can capture public imagination. The Spring is soggy, wet and grey, according to the Statement. 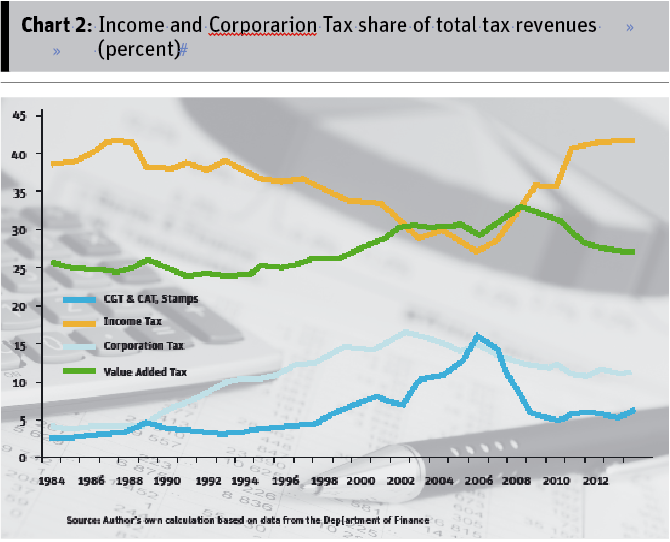 Still, whilst any growth vision remains lacking, launching the Spring Strategy, Minister Noonan said the government is in a position to implement another expansionary budget this year and every year out to 2020 “if this is deemed prudent and appropriate”.

The “if” part – crucial as it may be – is hardly enforceable, once the train of spending rolls out of the station. The Government does not strike a year-on-year pay and pensions deals with the unions. It signs multi-annual commitments. The Government does not launch investment projects that can be unwound in the future – as the botched ones from the past, such as the Poolbeg Incinerator and Irish Water, exemplify. Once a Government pet project goes up or rent-seeking vested interests secure public funding, it takes a national emergency to cut that funding.

Which brings us to the question as to who will gain from the Spring Statement.

According to Minister Noonan the state has, this year, “fiscal space of the order of €1.2bn and up to €1.5bn… for tax reductions and investment in public services”. So, “the partners in Government have agreed that [this] will be split 50:50 between tax cuts and expenditure increases …in Budget 2016”.

Does this breakdown make much sense? No. Over 2014-2015 the cumulative decrease in the deficit can be broken down into:

•
9% from a reduction in net Government expenditure and

And over recent years, taxes on ordinary incomes have underwritten most of the fiscal adjustment, while taxes on corporate profits and capital largely stagnated despite record high profits being booked via Ireland by the multinationals.

Job-creation and wealth-creation both require reducing the burden of State and taxation on the self-employed and early-stage entrepreneurs. Domestic demand growth – that allegedly contributes two thirds of 2015 growth and more than three quarters of 2016 growth – requires reducing household and corporate debt and stimulating domestic investment, preferably not in property. These too went unmentioned in the Spring Statement.

Meanwhile, Minister Noonan warned that returning to the days of “if I have it I’ll spend it” or the “even if I don’t have it I’ll spend it” policy stance taken by the opposition over the past four years, was by far the biggest risk to economic growth and job creation. He may be right, but his plan for expansionary Budgets into 2020 is a policy stance consistent with “I might have it tomorrow, so I’ll spend it today”. “We must never again repeat the boom and bust economic model”, said the Minister.

In tangible policy terms, however, to-date, the Government has projected the same policy approach to growth as its predecessors – targeted supports and old-fashioned tax incentives for its clients. Just as before, levelling the playing field for companies and entrepreneurs, getting rid of inefficiencies, reducing political influence on public contracting and ending tax-and-spend redistribution of resources from consumers to protected sectors are not popular with the current Cabinet, any more than they were with Brian Cowen, Bertie Ahern, and their predecessors.

Aptly, in launching the Spring Statement, the Minister for Finance mentioned just one ‘red line’ policy item, the inviolable and sacred 12.5% corporation tax. Everything else is more of an IOU based on “if – then” conditions.

Minister Noonan also adumbrated a promise to “give people security around their income and their pensions”. But it is very hard to see how this can be achieved, given the lack of any serious progress on dealing with legacy debts, and the 50:50 split between tax reductions and proposed expenditure increases in Government budgets.

Giving Irish taxpayers back €600-750m in Budget 2016 will do little, as the Government takes out of their pay water charges, and as increases in the Local Property Tax assessments loom.

This is before we consider the pesky ‘if’ in the above formula for Government IOUs. Consider the growth scenarios underpinning the Spring Statement projections.

The Department of Finance says little about actual interest rates, but does project relatively benign debt-related costs through 2020. This may be optimistic. The Department says that: “While unlikely in the short term, higher policy-induced interest rates would have a dampening impact on Ireland’s economic activity. Simulations suggest that a 1 percentage point increase in policy interest rates could reduce the level of GDP by almost 2½ percentage points by 2020”.

Here’s the bad news: current ECB rates are some 3 percentage points below the pre-crisis average. If we are moving out of crisis, that average is moving closer and closer in time.

Incidentally, the Government growth forecasts do not hold up to scrutiny when it comes to exchange rates outlook either. The Department assumes that the Euro-Sterling exchange rate will remain at current benign levels through 2020, unchanged on 2015. Euro-Dollar exchange rates are expected to improve slightly in 2016 compared to 2015 and then remain the same into 2017-2020.

Should the exchange rates reverse the recent devaluation of the Euro, the contribution of our net exports to future growth will fall.

Despite the combined efforts of two departments and two ministers, the Spring Statement amounted to little beyond electioneering. Promises of public spending and wage uplifts – irreversible commitments by a Government desperate to shore up the collapsed Labour vote, were offset by promises of undefined tax cuts. Certainly, the civil service output of papers, statements, programmes and plans is up dramatically on the pre-crisis average. The bad news is: there isn’t an ounce of new thinking there. •