There is no surprise that Budget 2016 was an election budget. The budget will play an important role in framing the economic debate in the run up to the election. It is worth looking at Budget 2016 and the pre-budget submissions made by the opposition parties, to gain insights into the parameters of this debate. While there were some good suggestions in these submissions, it must be noted that some of their figures could not be considered credible.

The most striking conclusion from any such exercise is the lack of vision, from all sides, on how the budgetary process could help to put us on a different path, a path towards a more equal, inclusive, and sustainable society with an economy that benefits all. A new narrative about the future direction of Ireland is much needed. We can only hope that this will emerge in the coming months.

The economic climate is much improved and this should have offered room for new vision. Ireland is the fastest growing economy in the EU and GDP is forecast to grow at 5-6% (and some suggest more) for the year, with strong growth predicted for 2016. However, the current strong growth rate is being helped by the weak euro, low oil prices and historically-low interest rates. These are external factors that we have no control over. Changes such as rising interest rates and energy costs could have a dampening effect on economic activity.

The former Governor of the Central Bank, Patrick Honohan, urged caution in a letter to the Minister of Finance before budget day. He said: “The rate of economic growth is being exaggerated and may be leading to overconfidence in planning for the future”. The business activities of multinational companies were affecting the figures, he said, creating a risk that Government policy would not be based on a realistic view of future prospects.

Budget 2016 had a 50/50 split between tax cuts and increases in public expenditure. It failed to focus on increasing investment in our social and economic infrastructure to the scale required to support our growing and ageing population and create the conditions for productive and sustainable economic growth. Budget 2016 was not as regressive as previous budgets. However, it failed to address income inequality and provide the range of supports needed to reduce poverty and deprivation in any significant way.

Would the opposition parties have done better? An overview of their pre-budget submissions provides insights into their priorities and an indication of the economic policies for their election manifestos. Their figures are taken at face value. The overall increase/decrease in taxation and expenditure is calculated as the submissions included a range of measures that increased and decreased the tax take and the expenditure level. What is of particular interest is the areas that they focus on and the balance between taxation and expenditure.

Sinn Féin
The main proposals in the Sinn Féin pre-budget submission included an enhanced capital investment programme; investment in homelessness and refuge services; investment in health and education services; supporting parents and investing in childcare; tackling income inequality and establishing an equality and budgetary advisory body; protecting communities; and making provision for frontline workers, the Haddington Road agreement, and demographics (growing and ageing population). It proposed a range of tax increases and cuts resulting in an overall increase in taxation of €292m, which includes a reduction in the USC, and the abolition of the property tax and water charges. Its expenditure proposals came to an overall increase of €1.8bn.

All the political parties, with the exception of People Before Profit, who presented a balanced budget, cut the budget by €1.5bn

Fianna Fáil
Fianna Fáil’s key proposals were to reduce the tax ‘burden’; tackle the housing crisis; invest in services; and support families and older people. Their proposed taxation measures would reduce overall taxation by €557m overall, with almost €400m of this coming from cuts to the USC. Its expenditure proposals would increase spending by €888m.

The Budget had a 50/50 split between tax cuts and increases in public expenditure. It failed to focus on increasing investment in our social and economic infrastructure 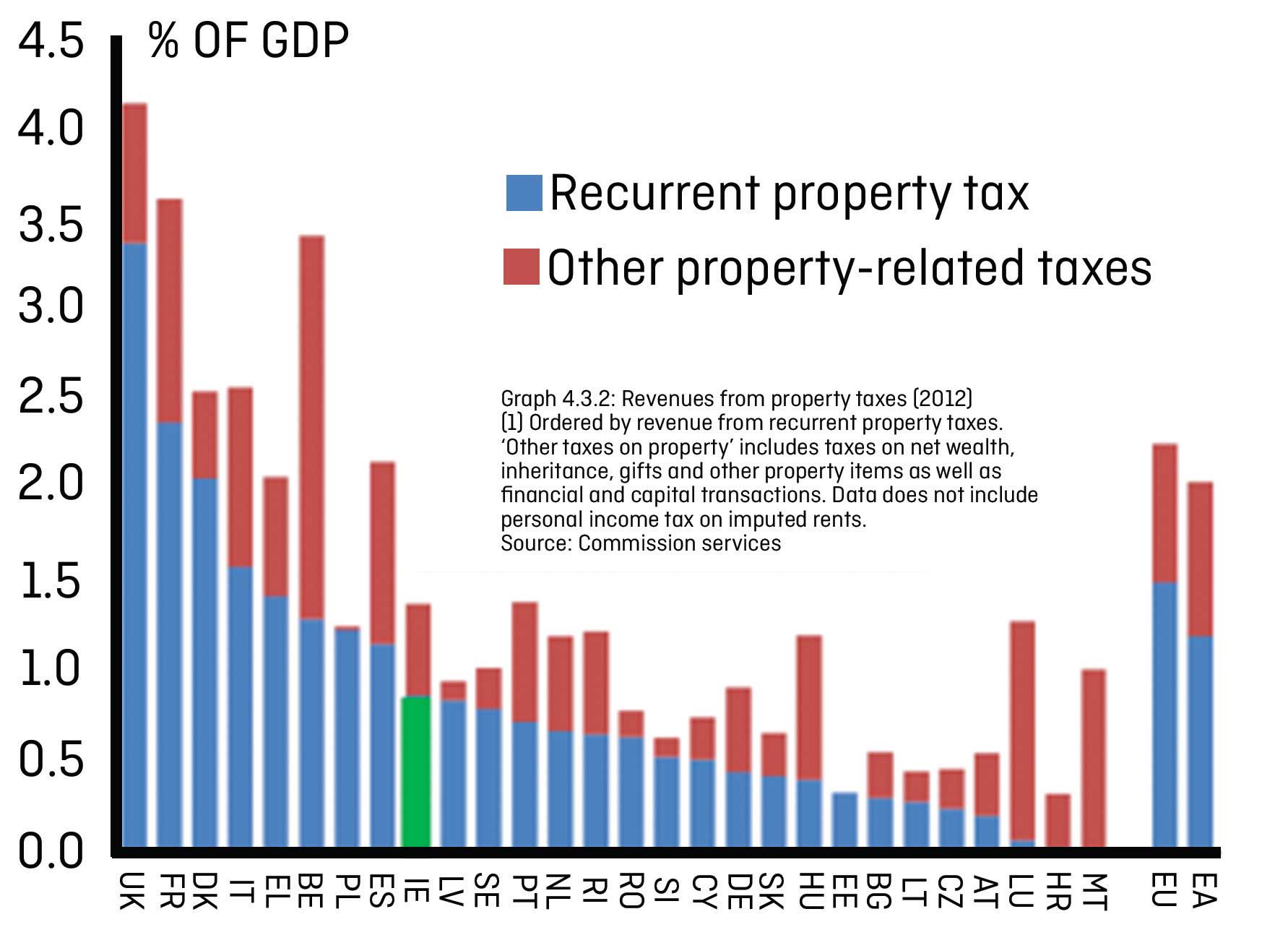 enterprise and improving health provision. The submission included a range of tax increases and cuts that would result in an overall decrease in taxation of €3m, which includes a reduction in the USC, the abolition of water charges and reductions in the property tax in certain circumstances. Its overall expenditure increase came to €1.5bn.

The priorities outlined in the People Before Profit pre-budget statement included the abolition of the property tax, water charges and the USC for salaries below €35,000; the reversal of cuts to social welfare; an expansion in health funding; the restoration of jobs and public services that were cut; investment in social housing, education and childcare facilities. Their budget costings were presented as a balance sheet with an opening credit balance of €1.5bn called ‘fiscal space’. The ‘credit available’ is €8.8bn, with total expenditure coming to €8.7bn, thus presenting a ‘balanced’ budget.

All the political parties, with the exception of People Before Profit, who presented a balanced budget, kept within an overall package of tax cuts and expenditure increases that amounted to a value of €1.5bn. While there was variation in taxation measures, there was common ground in the expenditure measures, including housing, education, health and social welfare.

All parties proposed cuts to varying degrees in the USC, property tax and water charges. New taxes included a wealth tax, a Financial Transaction Tax and a sugar tax. Other taxation measures included increasing or decreasing thresholds and rates of Capital Gains, Capital Acquisition Tax, PRSI and various tax reliefs. All parties noted the need to reduce the tax ‘burden’ on the low/middle income earners and increase their disposable incomes.

The latest figures from the CSO evidence serious issues of income, living standards and poverty. Social Justice Ireland has pointed out that the number of people experiencing deprivation has almost doubled (+615,000 people) since the financial crisis; three quarters of a million people are living in poverty, up 55,000 since 2011; and 230,000 children are at risk of poverty, up 12,000 in one year.

CHART 2: DISTRIBUTIVE IMPACT OF A 2% INCREASE IN WELFARE PAYMENT RATES 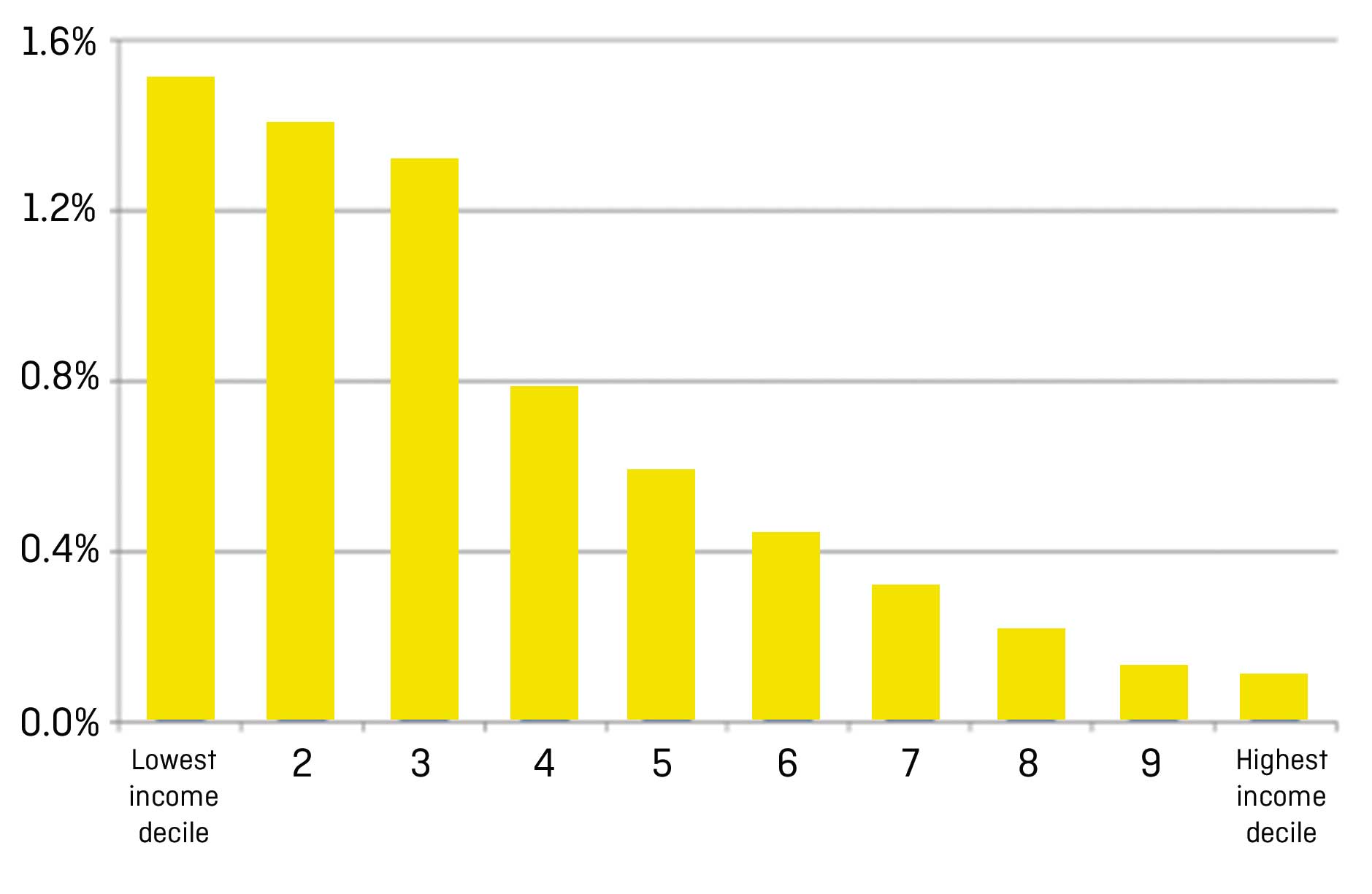 Cutting taxes to put more money back in people’s pockets to pay for substandard public services that have been cut back by lack of investment, and that often involve hidden costs to access, is not going to address the underlying causes of this poverty and inequality.While there may be some merit in re-orienting the tax system to make it more progressive, the overall tax take, at a minimum, needs to be maintained to provide the investment needed for our social and economic infrastructure.

The amount of property tax paid is well below the
EU average (Chart 1) and there is scope to increase it by removing some of the exemptions on certain types of land and re-valuing properties and/or changing the rate of tax paid. Property tax is generally considered to be more equitable than taxes on income. Higher taxation can be used to strengthen the social safety net.Chart 2 shows the distributional impact of increasing welfare payments by 2%, with the lowest income group benefiting most.

A greater emphasis also needs to be placed on bringing down the cost of living and increasing the lowest incomes. According to the National CompetitivenessCouncil, in 2013 Ireland was the third most expensive country in the euro area for consumer goods and services,with childcare, healthcare, housing and education identified as high cost. More public investment in these areas would bring down costs and make them more accessible. It would also have a positive impact on economic growth.

In the area of income policy, the minimum wage should be increased from the new rate of €9.15, over specified period of time, to the living wage of €11.50.This would increase the ability of low income families to meet their basic needs; increase the tax take; boost spending in the domestic economy; and reduce the need for low income families to supplement their income with the Family Income Supplement.

Justin Trudeau recently secured a stunning victory in the Canadian general election. Canadians chose a politics of hope over a politics of fear of change. The Liberals won by offering Canadians a positive, inclusive, pluralistic counter-narrative to Stephen Harper’s portrayal of the country. We need the same appetite for change if we are to move towards greater equality, inclusion and sustainability. We will soon know if this appetite exists in Ireland.