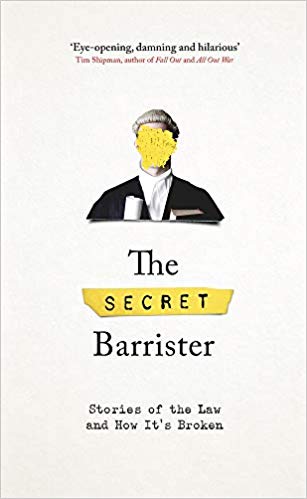 The rage of London at the moment is a self-consciously anonymous blog called “The secret barrister” which is an exposé of the profession of a criminal barrister and indeed of the criminal justice system written by a junior counsel specialising in criminal law. This blog aims to provide a fly-on-the-wall view of the criminal justice system, and of life at the Criminal Bar in general. He writes for the New Statesman, The Sun, The Mirror and Huffington Post. His first book, ‘Stories of The Law and How It’s Broken, published in March, is a bestseller.

If the author had named himself the professional repercussions would not have stinted so, sagely, he has not. The book is written with an avowed sense of sadness, indignation and anger grounded in an overarching desire to secure a measure of fairness within the criminal justice system.  The morphology of the book is to take a criminal case from inception to conclusion to show what goes wrong – to demonstrate that which is unfair.

The book’s argument, delphically stated and perhaps not fleshed out in the detail it should, is that we are moving from a criminal justice system to a criminal system which risks presumptions of guilt. The presumption of innocence which is a British creation is central to justice in a civilised system. But the scruple-based process has become telescoped and mere accusation is now criminalisation. The hallowed, flawed system is losing its protections and safeguards.

There is, in criminal justice possibly more than any other sphere of public life, a devastating lack of public education, exacerbated by inaccurate, ill-informed media reports and political pronouncements that betray an ignorance of the legal system that stretches up to the very top of government. This lack of understanding means that politicians escape scrutiny when terrible things are wreaked upon criminal justice – such as the policy that you can be wrongly accused of an offence, denied legal aid and then denied the cost of your private legal fees even when acquitted – and that, when we see a legal story reported in the press – such as the latest ‘look at how much legal aid this murderer received from your taxes – we often lack the tools to critically evaluate it”.

Now I agree with all this and it corresponds with my professional experience in Ireland and the United Kingdom. We are not far from the point that corrupt and (in Ireland) criminal state authorities use an accusation to create a snowball effect,  Often an accusation alone touted and reinforced by a dirty and compliant media is enough to destroy. Once the machinery of mediocrity and state incompetence gets a half baked sense of an accusation the whole thing trundles along and guilt or innocence are merely matters of happenstance. This is augmented by the cult of the pseudo-expert: a three-week training course alone underpinning the pontificator’s cant.

This is accentuated in Ireland by our deeply corrupt and criminal professional classes and as we have seen the toxic relationship between  TUSLA, the Department of Injustice and the bar with its illusory independence. In the UK I have not seen not overt state criminality though I recognise the book’s theme of derelict state disclosure of favourable unused material in the practice of the criminal bar here in London where I am now working. In an extraordinary 87 per cent of cases audit trails show the disclosure of evidence to defence lawyers from the police or Crown Prosecution Service to be unsatisfactory,

In my view this is systemic, as the police, social services, academics and an over-burdened professional class are making decisions in conditions of radical uncertainty and often with limited training.

Putting victims first, witness protection and the prohibition of hard and intimidating cross-examination is very dangerous. It protects liars and fabricators. A cloak of protection engineered by police, social workers and a dumbed down culture protecting those who enlist the nanny state of the semi competent.

Advocates have a right to annihilate people and not to be stopped in their tracks, as I was recently, if they reduce someone to tears where necessary.

Through lack of training, under-resourcing, lack of motivation and a drop in standards the system is descending in both jurisdictions into chaos.

The system’s flaws flaws are not those of the people who work within it, but are imposed: by the state. Each flaw is “either deliberately designed – such as the Innocence Tax, (the Legal Aid Act 2012 under which defendants find themselves massively out of pocket even when found not guilty)  or the restriction of compensation for miscarriages of justice – or is the product of populist, tough-on-crime, anti-defendant posturing, or betrays warped spending priorities where politicians persuade voters that one penny off a pint of lager is a better investment than a working justice system”.

Moreover, as the Secret Barrister notes, “Part of the problem, as well, is the legal profession. We do a stunningly poor job of explaining to people what the law is, and why it matters. Too many of us are content to busy ourselves in our own work, safe in the knowledge that what we do is important, but without feeling the need to deconstruct for the man on the street why two wigged figures incanting Latin before an old man wearing a giant purple robe, and the obscured codes and rules governing this mediaeval ritual, has any relevance to their everyday life. We then wonder why there is an obvious disconnect between the legal system and the people it exists to serve and protect”.

He is concerned about the ethical compass of vulture solicitors, as am I.

He does not say much about the art of the advocate per se but much about how cuts over time and an increasing workload have diminished the quality of justice and the profession.  He is scathing of minor prosecutions: “Much prosecuting in the magistrates’ court takes the form of someone getting to their feet and presenting a case they have never set eyes on before”.

In a sense being an advocate is  a vocation and a truth-telling and truth-eliciting exercise. The object like an artist is to establish the truth or as near an approximation of it as possible or at the very least to trade in ambiguity and complexity to create ascertainable and, what is still the hallmark of the jury system, reasonable, doubt.

Initially Stories of The Law and How It’s Broken shows that such matters as trial by jury and the presumption of innocence, so central to British and Irish justice, are not as sacred as is often assumed but rather are relativistic cultural practices, constantly eroded, and that the inquisitorial system, favoured in mainland European countries, where a case-hardened judge with the assistance of a prosecutor builds up a file over a number of years provides a more  obvious route to the truth.  However, ultimately the book rather hedges its bets on that. Yes an inquisitorial system is more likely to get to the truth in theory. The opposite will be the case if the inquisitor is a compromised state official and neither neutral nor objective but subject to political influence. The book also addresses very markedly the dangers of political influence in engineering a prosecution or an outcome. So the attempt to prosecute the organiser of the Catalan referendum Puidgemonte for treason or the prosecution of the Anti Austerity Alliance in Ireland for ‘false imprisonment’ arising out of a water protest are politically motivated, with the criminals the state.

In my experience of the respective systems, the UK is better: its judges independent unlike in Ireland where an exclusively inquisitorial system would be a disaster as our history of witless public Inquiries show. English inquiries are typically shorter in time than ours and actually get to the truth in the face of the non-disclosures and deceptions of the state.

Inquisitorial and adversarial systems are not of course the only systems of justice. The author also instances historic and contemporary practices of other systems such as the payment of blood money or in medieval times the wergild involving paying the victim off.

The mysterious author sides ultimately with the right to trial by jury. Despite its deficiencies,  he argues, at the very least the jury is an independent non-state actor, recalibrating the process in favour of fairness. Ultimately the evidence can be tested by independent barristers unleashing the forensic voodoo arts of cross examination and the alchemy that is advocacy and, in particular, a closing speech.

He is unduly critical of the district judges I have seen and appeared before in England many of whom are very conscientious and certainly much better, in my view, than most sectors of the Irish judiciary where summary justice is increasingly evident at the higher levels and our political appointments structure has not led to the elevation of highly qualified and independent judges.

He closes the book warnings of the incoming juggernaut of US litigation practices, increasingly evident in Ireland, of a total disconnect between the greedy pursuit of self interest and justice.  Among lawyers.

It is jaw dropping but an Irish book would be much more depressing. At least here in the UK the state, the police force, the justice department, and usually the lawyers are not intentionally criminal. Outcomes are not predetermined.

The rule of law, fair procedures and the presumption of innocence in a system creaking at the edges are still in evidence whereas in Ireland it has simply broken down, already.

Ireland awaits its own Secret Barrister. And a proper system of criminal justice for those with the least in this unforgiving society.