Judge McCloskey steps aside, in the end

Last year Mr Justice Bernard McCloskey, in the High Court, ruled the part of the Northern Ireland Ombudsman’s report that found there had been police collusion in sectarian murders at Loughinisland was unlawul. He then ruled in late January that allegations he had acted as a lawyer for one of the retired police officers mounting the legal challenge in a 2002 case against the then Ombudsman over the Omagh bombings, did not give rise to an apparent bias.

On that basis he would not recuse himself from discussions about what remedy was appropriate following the quashing. He pointed out that he had in fact not acted for the retired officer, who had taken no part in the legal action in 2002. He had been an officer in the Police Association at the time but had not ‘attended at consultations with Counsel or at Court, according to Solicitors who acted for the Police Association at the time’. Confusion about this arose due to a misreport in the Irish Times picked up by the BBC the judge said, though he might have added that he had indeed acted for the Officers’ Association.

In any event the judge’s reasoning then took a turn:

“It is essential for the court to detach itself as far as humanly possible from the conscientious and dispassionate judicial exercise which has given rise to its substantive judgment and, further, its assessment that the test for apparent bias is not satisfied. I consider that, in the truly unique and unprecedented circumstances of this case, the interests of justice will not be furthered by a formal and final outcome which gives effect to the court’s substantive judgment and choice of remedy… Following anxious reflection, my evaluative conclusion is that our legal system will not have served the families [of the murder victims] well if they are not given the opportunity of having this case heard by a differently constituted court”. And with that he has stepped aside.

He was vituperative about the Ombudman’s legal team, noting that, on five occasions, when the issue was “consciously – and no doubt carefully – considered, experienced legal representatives were unanimous in the view that recusal action was not appropriate”. He scathingly referred to “the (unmistakable) impropriety involved” in an affidavit sworn by the Ombudsman’s director of legal services “purporting to depose the Ombudsman’s state of mind and knowledge”.

He will not complete his judgment as to whether the Ombudsman’s report should be formally quashed, claiming his judgment was not binding on the replacement judge and instead should be viewed as “advisory”.

Murders in County Down

The impugned Ombudsman’s report into the murders at the Heights Bar, in the small community of Loughinisland, near Downpatrick, County Down concerned notorious sectarian murders of six innocent people and the wounding of many more, when members of the UVF fired their weapons into the bar while the World Cup was on the television. No one has been convicted of the murders, and the families of the victims have always suspected collusion between police and informers. It’s known that at least one of the gang was an informer. RUC Special Branch values intelligence to the point of notoriously shielding informants from the legal process.

The gang was a County Down-based UVF unit who were apparently engaged in a revenge shooting. They used at least one weapon, a highpower CZ58 rifle which came in a consignment imported from the Lebanon by Ulster Resistance, the UVF and the UDA in late 1987. As documented at length last year in Village, the weapons were distributed from Armagh, but – because of police collusion – many were never found.

One of the alleged gunmen has been identified in a powerful documentary, made by Oscar-winning documentary-maker Alex Gibney called ‘No Stone Unturned’. He was a local man, Ronald Hawthorn, who lived near the victims. The families’ frustration at the lack of convictions and suspicion of collusion between the police and the UVF seemed to be confirmed by the Ombudsman’s Report on the murders which was published in June 2016.

The Ombudsman found unequivocally that collusion had been a feature of the RUC investigation. He found evidence had been destroyed, leads were not followed in a timely manner, documentation was missing and a vital exhibit – the getaway car – had been destroyed. A full forensic report had been done on the car but the report argued that a piece of twine could have been the subject of new DNA tests. The Ombudsman said he was hampered by a lack of co-operation from the members of the RUC many of whom had made a decision not to speak to his investigators.

The report was divided into two parts. The first, dealing with the importation of arms into Northern Ireland in late 1987, tried to trace the loyalist weaponry from the pick-up, in Belfast, to delivery and distribution, in Armagh, to the 1994 murders, in Down. The second part dealt with the police investigation into the murders in Down. The first part of the report chiefly concerned H Division of the RUC which includes much of Armagh and part of Down; the second centred on G Division where the investigation took place.

A Judicial Review was initiated in August 2016, by two retired police officers, Thomas Ronald Hawthorne (not associated with Ronald Hawthorn named above) and Raymond White.

In the course of the hearings, the Ombudsman submitted a new affidavit which answered some questions raised by the Judge. As he described it, it “contains self-evidently important information and exhibits significant documents”. All this should have happened at an earlier stage, according to the judge, who made the damaging assertion that the Ombudsman’s first affidavit was “manifestly incomplete and therefore misleading”.

The Ombudsman’s new affidavit made it clear that Mr Hawthorne, the investigating officer in the case, who believed despite the fact he’d been given a cipher that he was readily identifiable in the report, was not implicated in an allegation that RUC Officers colluded with the UVF gunmen. Nor was he implicated in the collusion that the Ombudsman had found unequivocally was a feature of the investigation. The Ombudsman should have made this absolutely clear but did not, the judge found. However, no one else was found to be the object of the Collusion allegation either. As with the Smithwick Tribunal there had – tryingly – been a finding of collusion without named colluders.

Mr Justice McCloskey found for the applicants, ruling the report unlawful, on the following grounds:

• The Police Ombudsman did not have the legal power to make a determination that Mr Hawthorne had been guilty of an act of negligence.

• The determination was unfair on the grounds of procedural unfairness.

By virtue of these conclusions he said, certain aspects of the report “cannot be permitted any enduring existence”.

Mr Justice McCloskey’s reflection on the collusion allegation is significant beyond this case, as he says:

“It is difficult to conceive of a more withering and damning condemnation of professional police officers. ‘Collusion’ in this context must connote varying degrees of participation by police officers in the murder of six innocent civilians and the infliction of serious injury on five others.. I consider the language of “indictment” inapplicable as an indictment is a formal statement levelling accusations of criminal conduct against a person presumed innocent. It is accusatory in nature, is the culmination of the due process of the criminal trial. The Police Ombudsman did not use the language of accusation…. Rather he determined (underlined) collusion, unambiguously had occurred. This was an outright, and unqualified condemnation. It is properly described as a verdict”. 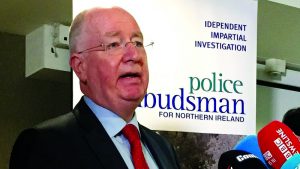 The judge pointed out that no police officer was prosecuted for any collusive act – such as murder, aiding and abetting the commission of murder, misfeasance in public office or conspiring to pervert the course of Justice.

Collusion, to the ordinary person and indeed to judges, connotes a serious criminal act. How can it be that such a profound conclusion can be made without identifying a colluder?

The Police Ombudsman like other investigators cast around for a definition of collusion in 2012, when he began the reinvestigation of the Loughinisland murders. A previous Ombudsman’s Report, finding no collusion in the police investigation, had been withdrawn after a successful Judicial Review brought by the families in 2009.

This time the investigation also included the origin of the weapons used in the atrocity, at least one of which had come from the weapons importation in late 1987. The Ombudsman drew on Judge Smithwick’s definition given in his tribunal into possible Garda collusion in the murders of Chief Superintendent Harry Breen and Superintendent Bob Buchanan. However, Smithwick in turn had essentially adapted a definition first formulated by Judge Peter Cory a retired judge of the Canadian Supreme Court, in 2003.

Smithwick described the broad principles at the first sitting on 16 March 2006:

“The issue of collusion will be examined in the broadest sense of the word. While it generally means the commission of an act, I am of the view that it should also be considered in terms of an omission or failure to act. In the active sense, collusion has amongst its meanings to conspire, connive or collaborate. In addition, I intend to examine whether anybody deliberately ignored a matter, turned a blind eye to it or pretended ignorance or unawareness of something one ought morally, legally or officially, oppose.”.

This permissive formulation allowed Smithwick to arrive at an accusation of collusion of gardaí, but no particular garda, even within the balance of probabilities.

Its now obvious that this highly permissive definition of collusion cannot survive the rigours of not just the criminal law but even the civil law reviewing the decisions of tribunals or the Ombudsman.

It has taken the extraordinary machinations of the Northern Ireland High Court acting on two different reports on the Loughinisland massacre to show that.