Fragile, vibrant, modern Ukraine is being overrun by 190,000 Russian troops, driven by an autocrat frustrated at the loss of its one-time sphere.

Ukraine may have been a backwater until recently but it is the second biggest country in Europe (after Russia of course). It is a thriving democracy with a free media and free speech, and a vibrant economy, culture and social life.

I visited Kyiv, Ukraine’s capital, and Odessa, in August 2021.  Both are sophisticated, affordable, modern cities with swanky bars full of beautiful people drinking cocktails, artesan IPAs and local champagne; lively parks swarming with rollerskaters; and cinemas showing Hollywood movies.  Kyiv, where the average salary is €620 per month, is an IT hub,  dotted with high-rise apartments under construction – their ubiquitous realtor-branded photographic hoardings in English showcase the cosmopolitan residents they seek to attract.  Odessa is the best-preserved Neo-Classical city in the world with a ritzy beach resort. Odessa has the most stylish restaurants East of Paris. We stayed in the Londonskaya Hotel, a Renaissance style palace built by a French confectioner in 1828 near the steps that feature in Sergei Eisenstein’s revered 1925 movie Battleship Potemkin. He stayed there too.

Ukraine hit the spot after its 2014 ‘Revolution of Dignity’ when protesters at Maidan square in Kyiv ousted the democratically elected president Viktor Yanukovych a thuggish Russian-backed mafioso.  By then he had purloined around $100bn, equal to more than half the annual economic output of Ukraine. Leaned on by Putin, in 2013 Yanukovych had abandoned Ukraine’s Association Agreement with the EU and moved to join its Russian-led rival.

Yanukovych ordered police to shoot protesters who opposed him. When the crowds swelled, Yanukovych fled to Russia where he remains, poised, allegedly hauling $32 billion dollars in cash across the border in trucks as his power crumbled.

The shared heritage of Russia and Ukraine goes back more than a thousand years to a time when Kyiv was the capital of the first Slavic state, Kyivan Rus, the birthplace of both Ukraine and Russia as  Vladimir Putin recently asserted: “Russians and Ukrainians are one people”. Ukraine has been carved up down the centuries by marauding empires. Mongols, Polish and Lithuanians in a way that Russia was not. In the 17th century, Russian tsars ruled lands to the east of the Dnieper River as “Left Bank” Ukraine while lands to the west of the Dnieper, or “Right Bank” Ukraine, were ruled by Poland, though in 1793 those lands too were annexed by Russia. A Russification policy banned the use of the Ukrainian language, and pressurised Ukrainians to convert to the Russian Orthodox religion. The people were generally known as Rusyns or Ruthenians and the  ethnonym Ukrainians came into wide use only in the 20th century after the territory of Ukraine obtained distinctive statehood in 1917. Stalin organised a famine that killed millions in the 1930s and shipped in lots of Russian speakers.

Because eastern Ukraine came under Russian rule much earlier than western Ukraine, people in the east have stronger ties to Russia, often speak Russian (Russian and Ukrainian share 60% stem words anyway) and have been more likely to support Russian-leaning leaders.

Crimea was occupied and annexed by Russia, irritated by the defenestration of Yanukovych, in 2014, followed shortly after by a separatist uprising in the eastern Ukrainian region of Donbas that resulted in the declaration of the Russian-backed People’s Republics of Luhansk and Donetsk. Ukrainian forces have been fighting pro-Russia rebels in the east since 2014 in a conflict that has killed some 14,000 people.

Exploiting its overwhelming military superiority,Russia  amassed 190,000 troops on Ukraine’s borders heralding an attack simultaneously on several fronts, from the north-east, the Donbas and Crimea. and Belarus. Airstrikes will possibly underpin a lightning drive south to seize the capital, Kyiv. And encircle Ukraine’s army, neutralising the country and its leaders. The US estimates artillery, missile and bomb strikes and ground clashes could kill 50,000 civilians.

After making an angry speech and berating his security council Putin moved troops into Luhansk and Donetsk which have been armed, financed and politically controlled by Russia since 2014. But until now were recognised as part of Ukraine.

At 530 am on 24 February Putin launched a full-scale invasion of Ukrainian territory for a second time following the 2014 annexation of Crimea. But in this case, Russia has not annexed the territories. A document signed by Putin on Monday also allows him to establish military bases or place missiles in the territories. The bourses were diving, Germany suspended its Nordstream gas-pipeline collaboration with Russia and Boris Johnson was tearing around finding Russians to sanction.

It is the most incendiary invasion of another country’s territory in Europe since the Second World War. This is modern war. 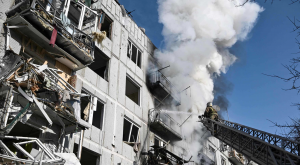