The Millennium Development Goals agreed by the United Nations in 2000 come as close as you can get to motherhood and apple pie in the global development field. These eight goals are credited with reductions in extreme poverty and child mortality, increased access to safe drinking water and primary school enrolment, improved gender equality and greater levels of overseas development aid. What could be wrong with all that?

Well, the targets set, because they are globalised, disguise uneven progress between different countries. Sub-Saharan Africa, for example, has not done well. And the targets, because they focus on extreme poverty, do not address disparities within countries. That would have required the wealthier countries to look to their own performance at home as well as abroad. 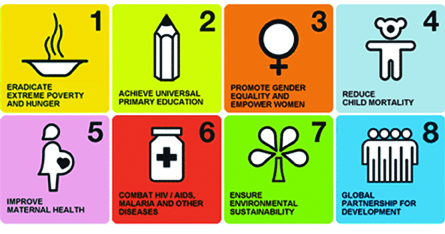 A focus on extreme poverty is important. However, it does not necessarily lend itself to development, as this requires a wider transformation of both the economy and society. The Millennium Development Goals sit easily and, ultimately conveniently, with the neo-liberal economic project. The emphasis is on social development and not economic development and the focus is on extreme poverty and not on equality. This leaves the economy to market forces and the private sector. It confines the role of the state and overseas donors to building so-called human capital.

In this way the Millennium Development Goals end up enabling a development model based on a small state role, foreign direct investment, and largely unfettered market forces. This is a model that runs counter to the  values that these goals aspire to.

The Irish Government has an opportunity to shape new development goals that could apply more universally to Ireland, the EU and the wider world. Over the second half of the Irish EU Presidency the EU must decide on its position in relation to what should follow the Millennium Development Goals when they expire in 2015.

The European Commission has published a Communication that usefully proposes that any new framework of goals should be universal and apply to all countries. The Communication highlights the need to bring together the economic, social and environmental dimensions of sustainable development. It seeks a focus on the “drivers for inclusive and sustainable growth, within planetary boundaries”. It proposes the objective of providing “A decent life for all”. This has the potential to address some of the deficiencies in the current goals.

Inevitably, however, the market rears its ugly head. The European Commission emphasises the need for structural transformation “to allow for market-friendly open economies”. This is transformation then to enable the same unfettered market that has brought us environmental destruction and gross inequalities between countries and within countries. The Communication contradicts its promise with this short phrase.

Equality gets mentioned in the Communication. It states that the “framework should also address justice, equality and equity” because they are vital for inclusive and sustainable development and important values in their own right. However, there remains a challenge to make equality central to the wider approach espoused by the European Commission.

The Irish Government should seek to build on these European Commission proposals by:

A deliberative event, ‘Setting Goals for a Better Ireland in a Just World’, in the RDS in Dublin on the 20th April proposes to explore and develop an agenda that should be advanced by the Irish Government. It is organised by Claiming Our Future with Dóchas and the Wheel. Information is available on www.claimingourfuture.ie.

It would be useful for such an event to explore and define a new rights-based approach to development as a basis for these new goals. In such an approach people’s needs are identified in terms of rights. They are empowered to know their rights and enabled to seek a fulfilment of their rights. After all, the fulfilment of the Universal Declaration of Human Rights would go further than anything offered by the Millennium Development Goals.