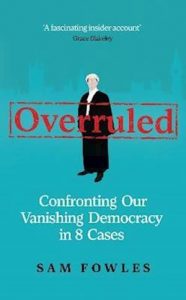 “The job of the prime minister in difficult circumstances, when he has been handed a colossal mandate, is to keep going – and that’s what I’m going to do” (Boris Johnson 6 July 2022)

On most Saturday mornings I am incensed by the op ed piece by Charles Moore in the London edition of the Daily Telegraph. My wife questions why I continue to read him and allow my blood to boil over my tea and toast. Moore is like marmite (of which I am fond). Part of my anger is that the views of Moore on Saturday will be replicated by the red tops and tabloids on Monday. I made this point recently to an online discussion group organized under the title of ‘Democratic Backsliding’. I pointed out that I considered our concerns to be not about democratic backsliding but rather about constitutional backsliding: as (our) English democracy slides towards a constitutional abyss.

This book review is offered to readers of Village as a further dispatch from the Village of Westminster. It is a further caution – as if politicians in Dublin needed reminded of it – of the dangers of constitutional erosion which can result in democracy metaphorically falling over a cliff. Whilst politics in Ireland has its own style of theatricality, both tragedy and comedy, both gore and slapstick, in England, and I specify England because of the devolved settlement (including that pesky Northern Ireland Protocol), we (the subjects) appear to be in the grip of a dangerous attack on the constitutional settlement: democratic backsliding.

Constitutional backsliding is at the core of the analysis elegantly and persuasively presented by Sam Fowles in “Overruled: Confronting Our Vanishing Democracy in 8 Cases” through four themes – accountability, bullshit, centralization, and enfranchisement. (Bullshit: Statements that treat Truth as immaterial (page 8)).

Fowles is anxious that “We have allowed principles that were once inviolable to become contestable” (page 7). A contested principle, such as power, means it is relational to other factors which in the present circumstances and era of English constitutionalism means living in a weakened democracy governed by an Elective Dictatorship from Downing Street serviced by unelected SPADS.

That is some seismic relational shift in the constitutional settlement premised on John Locke’s Separation of Powers doctrine. The power to govern and the practice or art of government and governance are no longer accountable or answerable to the Judiciary and the Legislature, those institutions preserving the Rule of Law which serves to protect our democratic liberties and freedoms.

The contested principles – the purposes of democracy – now serve those in/with power: the Executive not in Whitehall but in Downing Street. Power now means the delivery of the Democratic Mandate (the profoundly unread and obliquely drafted manifesto of pledges) in the interests of party supporters (read: donors).

The Executive knows best in an expression of a venal paternalism corrupting the letter and the spirit of the received constitutional settlement through the erosion of those pesky checks and balances securing truth and accountability.

Fowles “Overruled” is an antidote to the sophistry offered by Charles Moore when he is regurgitates the ideas of the right wing think tanks such as Policy Exchange – the SPAD academies.

The problem is of how any alliance of adherents to the ‘Old Ways’ can assume and maintain credibility without becoming labelled precious liberal academics, money grubbing lefty human rights lawyers, champagne socialists quaffing at Glyndebourne, or hand wringing Liberals in Whig clothing, and pro-EU Guardian reading intellectual elites.

Fowles is alert to this hostage to fortune which is why he is Counsel to the All-Party Parliamentary Group on Democracy and the Constitution and founder of the Institute for Constitutional and Democratic Research which informs the APPG.

I declare a vested interest at this juncture. I am a public lawyer in a practice reliant in part on legal aid funding. I am a Fellow of the Institute for Constitutional and Democratic Research. I was the requester of file CJ4/6052 ‘Provisional IRA intentions and activities in Great Britain’ catalogued by the National Archives but retained by the Northern Ireland Office. My request is now reported as Christopher Stanley (KRW Solicitors) v Information Commissioner and Northern Ireland Office [EA/2019/0019]. Sam Fowles acted pro bono in this appeal. The case is discussed in Chapter of Six of “Overruled”. Therefore, I have had the privilege of working closely with the author. In a discussion on tactics – I think in the café of the RCJ – Sam introduced me to a blindingly obvious point (almost a syllogism):

“A government which does not trust its citizens is always frightening” (page 127).

Sam Fowles has been instructed in (even as a bag carrier) in eight cases (including the Article 50 Gina Miller litigation) which constitute the narrative of this book.

These are the values-rights attacked by the likes of Charles Moore and the inhabitants of Policy Exchange. These are the values described by Moore as The Blob. I called them the Old Ways (in a nod to Robert McFarlane). Sam Fowles has articulated these values thus, which is more persuasive than my creaky Lockean yearning:

“Constitutional rights are the most important thing we have because it is only by protecting our democracy that we can preserve and achieve everything else that is important to us in the political realm” (page 85).

Constitutional rights/values reflect, and I think/hope Sam Fowles would concur on this, the demand for governance for and in the public good. Which is why the Separation of Powers between Executive, Legislature and Judiciary is so necessary and which is why the Executive attacks (systemic over at least 30 years) be it on inter alia access to justice funded by legal aid; restricting judicial review; denying access to information; the intent to repeal the Human Rights Act 1998;  the occasional tossing of red-meat legislation to the Tory Back Benchers by way of Command Papers and Bills or lucrative job offers and junior ministerial postings; be  it on law-making by delegated legislation or the insertion of Henry VIII clauses etc., etc., etc.), are so very insidious, corrosive, self-serving.

Sam Fowles does not advocate a written constitution for the UK but rather a short binding statement of constitutional values – democracy, parliamentary sovereignty, the rule of law, the separation of powers and human rights (page 191). These could serve as the Lodestar of the British Constitution (Chapter 1).

Hear, hear to that. Such a short binding statement of constitutional values should be embedded in the curriculum of our schools, and in the institutions which facilitate civic engagement and discourse, and in the oaths taken by those who (over) rule over us. It could also serve to demonstrate the importance of constitutional values and democratic principles to other nations where political integrity is being weakened because of vested interests and indeterminate leadership – Paris, Washington, Dublin (?).