The National Transportation Authority was unhappy with the assertion in a recent article in Village (Labour’s Weapon , May 2015, by Michael Smith), that: “… Dublin Bus continues to buy polluting vehicles rather than the best available emission-efficient standard”.
On behalf of the National Transport Authority, which now purchases all vehicles for Ireland’s state-subsidised (Public Service Obligation) services, including all Dublin Bus vehicles, I can confirm that all new vehicles purchased by Dublin Bus meet the current stringent standards with regard to emissions, currently Euro 6 Standard. See Table 1 for a detailed display of data relating to these standards.
Dublin Bus is committed to reducing its energy emissions (and hence CO2 emissions) as required by the Government’s National Energy Efficiency Action Plan. Significant progress has already been achieved to date through the reorganisation of bus routes, through the Network Direct programme and reductions in vehicle fuel consumption. Further improvements are planned through continued investment in fleet upgrade, supported by the National Transport Authority, replacing older higher-emissions vehicles, and also by extending eco-driving techniques.
In relation to the fleet-replacement programme supported by the Authority, diesel-engine emissions have declined significantly in recent years due to the introduction of new EU standards limiting the emission levels of various pollutants. These include Carbon Monoxide (CO), Hydrocarbons (HC), Nitrous Oxides (NOx) and Particulates (PM).
These directives are summarised 9n Table 1 below. 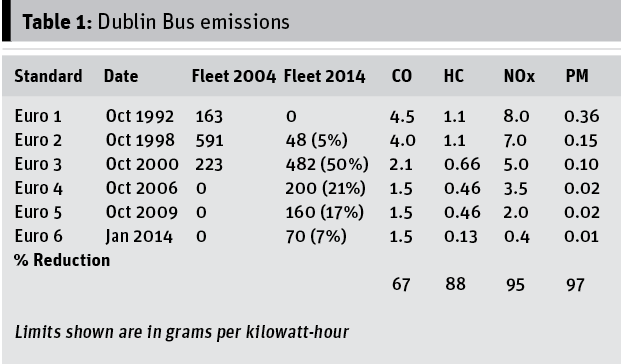 The Directives are not retroactive and vehicles built before the relevant dates are not required to meet later Directives.
Only the latest vehicles, Euro 6, are fitted with Diesel particulate filters. Emissions from the bus fleet will continue to improve as older vehicles are replaced with new vehicles to the latest standard; therefore, the Dublin Bus fleet replacement programme is a fundamental part of Dublin Bus’s emission-reduction strategy.
This year the National Transport Authority is grant-funding Dublin Bus to purchase a further ninety Euro 6 double-decker buses. These will replace older Euro 2 and Euro 3 vehicles. As can be seen from the table above, this will result in a significant reduction in overall emission levels from the Dublin Bus fleet, with a lowering in PM of 93% and 90% respectively.
You can see the huge improvements that have been made in recent years, and that will continue to be made into the future.  We are happy that you are agreeable to correcting the impression given in your recent article, so that your readers are now better informed on the matter. •

The reference in the article was to the diesel-hybrid electric buses used since 2007 in London and many other cities. Hybrid electric buses emit about a third less pollutants and a third less fuel than the most recently-manufactured buses with diesel-only engines (Euro 6). Comparing climate-change pollutants, for instance, hybrids emit 30% lower emissions than Euro 6 diesel-only buses.
Moreover, a key advantage of hybrids is that they can switch off their diesel engines in favour of their electric motors when journeying through populous and sensitive parts of the urban environment – with no local pollution whatsoever. This clearly benefits cyclists, pedestrians and residents.
London currently has 1,200 hybrids (more than the entire Dublin Bus fleet) and plans to have 1,700 by 2016, at which point hybrids will make up 20% of its fleet. Dublin does not currently operate any hybrids, and unless action is taken, Dublin will slip further behind.
The 97% figure cited in the headline refers to new buses of course. And to particulates.  No reference is made to CO2 emissions.
I understand that buying a small number of hybrid electric buses as a trial basis was recently considered for Dublin but that this option has not yet been adopted. It would be welcome .