Like most people in Ireland, I grow almost none of my own food. Unfortunately living in the city, and not having a garden I am somewhat restricted. Every now and again I get a pang of anxiety when I see supermarket shelves empty on a Sunday night, before the delivery lorries have arrived. This is a reminder that our plentiful food supply is not a given, and is dependent on many factors, such as the supply of fossil fuels to transport the food, the viability of food producers, processors and supermarkets, as well as the availability of money to afford a nutritious and balanced diet. Without one or some of these factors, I, and many others, would struggle to eat properly.

In 2000, a major truck-driver strike in the UK brought the country to the brink, with severe fuel shortages and dwindling of food on supermarket shelves. It is said that modern civilisation is three meals deep. If the delivery lorries suddenly stopped, if the fridges couldn’t be powered, or if the value of currency collapsed, food shortages would be a very real prospect. While something quite as dramatic as this suddenly happening is unlikely, the fact that it could happen at all should be enough to make us consider the security of our food supply.

Food security isn’t something that many of us think about very often. According to the Global Food Security Index of 2017, Ireland is the most food-secure nation on the planet, so why would we worry ourselves unnecessarily? 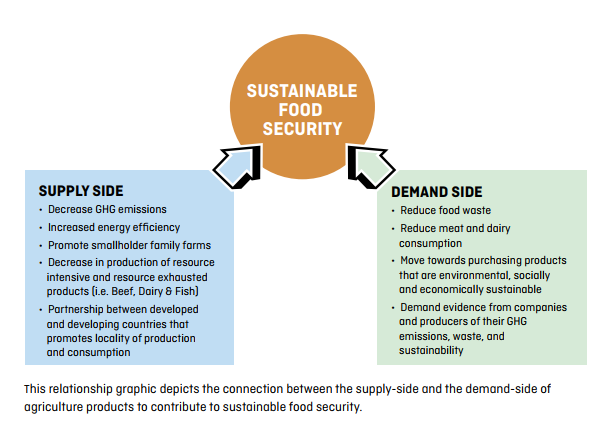 In 2008, food security became a prominent global issue again. The rising price of oil, coupled with pressure on food supplies from extreme weather events and the increased use of land for biofuels, led to the doubling of food prices in many countries, as well as the disruption of the food chain as many small food businesses couldn’t cope with the extra prices. Shelves emptied in several developing nations, leading to food riots and civil unrest. Closer to home, Ireland and the UK saw a dramatic rise in the number of people relying on food banks during the worst of the recession. Obesity and diabetes rates are on the rise. Ireland will become the most obese country in Europe, with the UK, within a decade, according to a study published in The Lancet. 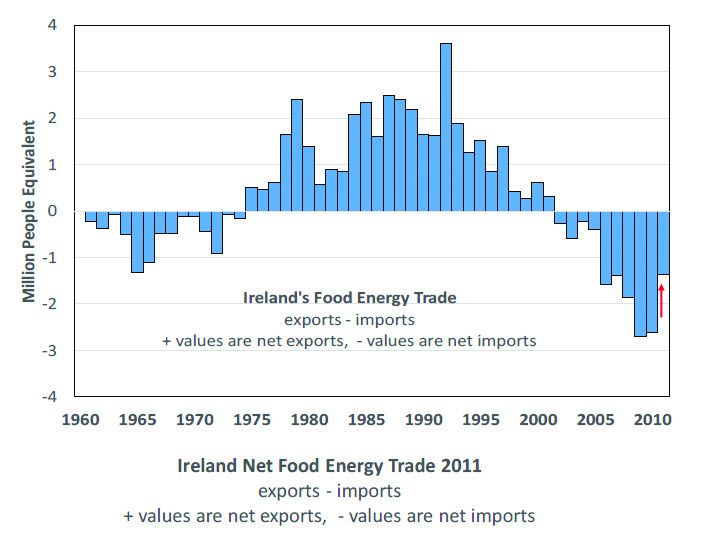 Unfortunately, due to the nature of the profit-driven agri-business sector, it is often the unhealthiest food which is the most heavily marketed and affordable. Sadly, our profit-driven food system is not fit for social or environmental purposes. In what is often a race to the bottom, supermarket price wars ensure many fruit and vegetables are sold at below cost. Consumers vote with their purses and it is the cheapest food, usually imported from large commercial farms, with economies of scale, which win out over smaller producers, many of whom have been producing food for generations. As a result many of our smaller farmers, especially crop producers are struggling to stay in business.

Sadly we are becoming an agricultural one-trick pony, with beef and dairy being the hot-ticket items. This reduces the diversity of food we produce in Ireland and is leaving us more dependent on food imports. It is a bizarre reality of a neoliberal food economy that the most food-secure nation on the planet is a net importer of food. According to the Food and Agriculture Organisation (FAO) of the United Nations, data from 1960 to 2011 (the most recently available data) reveal that while Ireland was a net importer of calories until the mid-1970s, it then became a net exporter until 2000.

Since then, however, the value of this country’s foodenergy net imports in calories has at times exceeded the equivalent of the calorie intake of 2.5 million people.

This leaves Ireland very vulnerable to disruptions in the food supply-chain. We received a taste of this earlier in the year when supermarket shelves became short of vegetables such as broccoli and lettuce. Being so heavily dependent on imported food is taking a major gamble with our long term ability to feed ourselves, as we head into a future of huge uncertainty regarding the supply of fossil fuels. 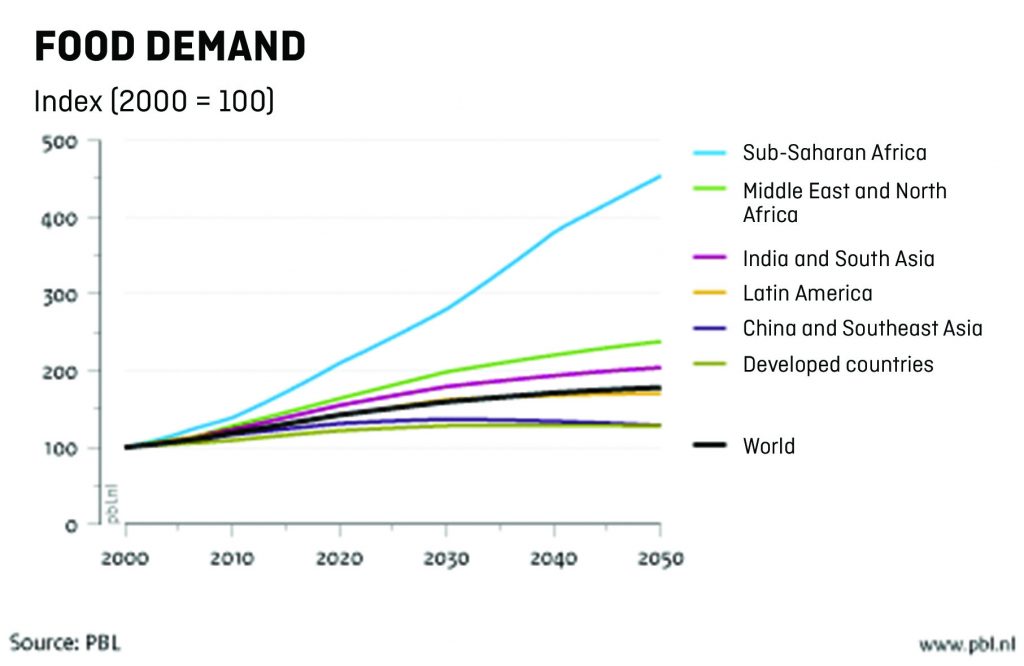 From artificial fertilisers, to pesticides, farm machinery, processing, packaging, shipping and refrigeration, fossil fuels play a major role in getting food from farm to fork. On average, up to 10 calories of fossil fuel input is required to produce just one calorie of food. Richard Heinberg, a fellow of the Post-Carbon Institute believes that we need to decarbonise our agricultural system by making a number of changes to how we produce food. First, we need to become less dependent on fossil-fuel-derived artificial fertilisers. Second, we need to shorten our food supply chains and once again produce more food close to where it is consumed. This will mean more people involved in producing food. Third, along with shortening the supply chain, we will need to become less dependent on heavily-oil-dependent machinery, which, again, will mean more people working the land on smaller plots of land. This isn’t as pie in the sky as it might sound. Already in Ireland, there is a growing interest in community-supported agriculture, urban agriculture and conversion to organic farming. Moy Fill community farm in County Clare, which has recently run a successful crowdfunding campaign to help it dramatically expand its sustainable farm, is a pioneering example. Research has shown that organic and mixed farms are better for biodiversity and can be just as productive as intensive monocultures, which are reliant on large inputs of fossil – fuel based fertilisers. Model estimates indicate that organic methods could produce enough food on a global per capita basis to sustain the current human population, and potentially an even larger population, without increasing the agricultural land base [Badgeley et al] ‘Organic agriculture and the global food supply’ 2007.

Not only will smaller farms, which are organic or nearly organic increase the resilience of our food system to external shocks, they will also make it less damaging to the very resources which underpin the whole system. Intensive farming practices, and the heavy use of artificial fertilisers have been linked with soil erosion. It takes 1,000 years to produce three centimetres of topsoil, yet we lose about 10 million hectares of arable farmland every year, and billions of tonnes of topsoil due to soil erosion. If current erosion trends continue, global top soils could be gone in under 60 years, having detrimental effects on our ability to produce food. This is not sustainable, particularly when it is predicted that demand for food by 2050 will be more than double what it was at the start of the century, on FAO projections of human population of 9.1 billion.

Despite the importance of healthy soils, and the severity of the erosion crisis, there remains no dedicated soil-protection legislation at national, or European level. Recently, the People 4 Soil campaign called on the European Commission to legislate to protect soil in Europe. Previous efforts to introduce such a Directive failed.

While we may be recognised as the world’s most foodsecure nation, Ireland is extremely vulnerable to external shocks in the food system. Our increasingly intensified, export-driven, fossil-fuel-dependent food system is not compatible with the transition to a low-carbon and postpeak- oil world by the middle of this century. As we get closer to the 200-year anniversary of the Irish Famine, we need to plan for a realistic food and farming future for Ireland.