Despite Angela Kerins’ claims, targets have not been achieved.
Michael Smith

Public-sector cutbacks and unprecedented levels of unemployment are reversing hard-won gains on the path to equality for whole swathes of society.  In July 2009, the Equality Authority launched its Annual Report 2009. It is telling that Angela Kerins, chairperson of the Authority, chose to highlight a supposed “campaign of misinformation” which “purported to show that the Equality Authority was either no longer in operation or that it was no longer operating efficiently”. Certainly those championing equality of outcome will not have been enthusiastic about Ms Kerins’ chairpersonship but there does not in fact appear to be any misinformation, as opposed to its sister medium – inconvenient information – in currency.

When questioned by journalists at the launch of the Annual Report, Angela Kerins would provide no details of this supposed campaign or its perpetrators. She went on to highlight that the Equality Authority had “worked on the essential principle that it is not what we spend but what we achieve that counts” and claimed that “our targets have been achieved”. Clearly the supposed ‘campaign of misinformation’ had little impact. However, her comments encourage a punctilious focus on the information circulated by this public body.

Angela Kerins suggests all is well at the Equality Authority and that the Equality Authority delivered its ambitious plan with a significant cut in resources. She fails to point out that this ‘ambitious’ plan was launched in March 2009, five months after the cut in resources of 43% had been announced and three months after the cut had taken effect. So the targets set in this plan were set in the full knowledge of the cut in resources. It would not exactly be a surprise if the targets were achieved. But were they?

In March 2009, Angela Kerins spoke to journalists at the launch of the Strategic Plan for the Equality Authority. She said that 38 new case-files were opened in January 2009, so Ms Kerins expected about 450 case-files in the full year. The Annual Report for 2009 states that in fact only 213 new case-files were opened by the Equality Authority in 2009. Her expectation was therefore not even nearly realised. Her communication with the journalists could hardly be described as a model of accurate information.

There is a target set in the Strategic Plan that the Equality Authority would deal with 4000 queries under the equality legislation. The 2009 Annual Report shows that the Equality Authority dealt with 3370 queries under the equality legislation. This is 16% less than the target. To suggest that “our targets have been achieved” in this context would appear tantamount to misinformation.

The Annual Report claims that 878 case-files were “processed’ by the Equality Authority during 2009. This would appear to exceed the target set in the Strategic Plan that the Equality Authority would “progress” 200 case-files per annum. However, we can only wonder at the careful choice of wording. Does “processing” mean “progressing”? Or what does “processing” mean? The terminology is unnecessarily voguish in either case. The question is: will Ms Kerins ever deign to elucidate?

A one-liner in the Annual Report, presented without clarification, provides some indication of what ‘processing’ might mean. It states that “At year end, following a concerted effort to reduce a backlog, 658 case-files had been closed’. This is an extraordinary 75% of all case-files held by the Equality Authority. We are given no information on what happened to these case-files. This is in contrast to the 2008 Annual Report which provided a detailed table explaining the mere 268 case-files closed in that year. At best this announcement of the closure of 658 case-files constitutes em unclear information, at worst it indicates that the Equality Authority has taken to processing case-files without progressing them.

Then the Annual Report 2009 is strangely silent on other targets set in the Strategic Plan. The Strategic Plan committed the Equality Authority to the publication of one review of casework per annum and to the use of one of its powers (to take cases in its own name, seek amicus curiae status  in court proceedings or present codes of practice  to the Minister for Justice that could be relied on in court proceedings) per annum. These targets are not mentioned in the Annual Report and are therefore unlikely to have been achieved.

A spokesperson for the Equality Authority rebutts the substance of Michael Smith’s article: the fact remains that the total target for responding to public enquiries was exceeded in 2009. 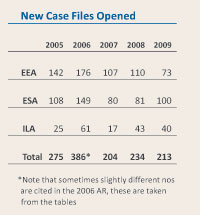 There is no target in the Equality Authority Strategic Plan to reach 450 cases in any one year. While the comment that 450 case files might be opened in 2009, as reported by the Irish Times, is attributed to the Chairperson of the Equality Authority, this comment is disputed and may have been made by some other participant at the Launch of the Strategic Plan. It appears that it was – in any case – a year-end prediction based on case file activity for one month. Predictions are not always borne out in reality. As no such target was set in the Strategic plan, the fact remains that case file figures for 2009 are broadly in line with previous years.

The Equality Authority’s Strategic Plan (2009 – 2011) has set quantifiable targets to be reached. This is a first for the Authority. The total target for responding to public enquiries is 8,000 and this target was exceeded. In 2009, the Equality Authority dealt with over 8,155 queries across all areas within the Authority’s remit. Within this target there are various sub-categories, some of which were slightly higher and some of which were slightly lower than the target estimate.

The fact remains that the total target for responding to public enquiries was exceeded in 2009.

With regard to the processing of case files, a considerable backlog of case files had accumulated within the Equality Authority in recent years and there was a concerted effort made to clear this backlog. The Equality Authority’s Strategic Plan sets a target that 200 case files will be processed each year, and in 2009 the total number of cases processed was again in excess of this target.

In 2009, 465 case files were closed and 213 case files were opened, a total of 681 case files being processed over the course of the year. This is less than the earlier reported figure due to an administrative error which included all files opened since the introduction of the Intoxicating Liquor Act. However, the total figure still significantly exceeded the targets set for 2009.

The review of the existing case files within the Equality Authority, and clarification as to their status, was a very necessary and long overdue task. 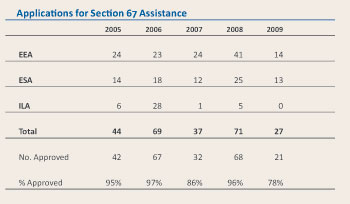 With regard to the number of applications for assistance this is also subject to year-on-year fluctuation. 27 applications were received in 2009 compared with 71 in 2008 and 37 in 2007.

Casework reviews are published annually on the Equality Authority website and this is stated in the Annual report (p 27 in the 2008 Report and p 2 of the 2009 Report). The casework review for 2008 is published on the web with the Annual report for that year. The casework review for 2009 is nearing completion and will be on the web shortly.
2009 saw the conclusion of a significant case taken in the name of the Equality Authority which was decided by the Supreme Court and is reported upon in the annual report at p 35.

A revised Code of Practice on Sexual Harassment and Harassment is currently with the Minister for approval.

The Equality Authority – like all organisations funded by the taxpayer today – has had to adapt to Ireland’s changed circumstances over the recent period. We have had to review how we operate, clear backlogs, and introduce new ways of working. These reforms have been undertaken with one aim: to meet our important remit and offer the high standard of service that the public deserve in the most cost effective way.