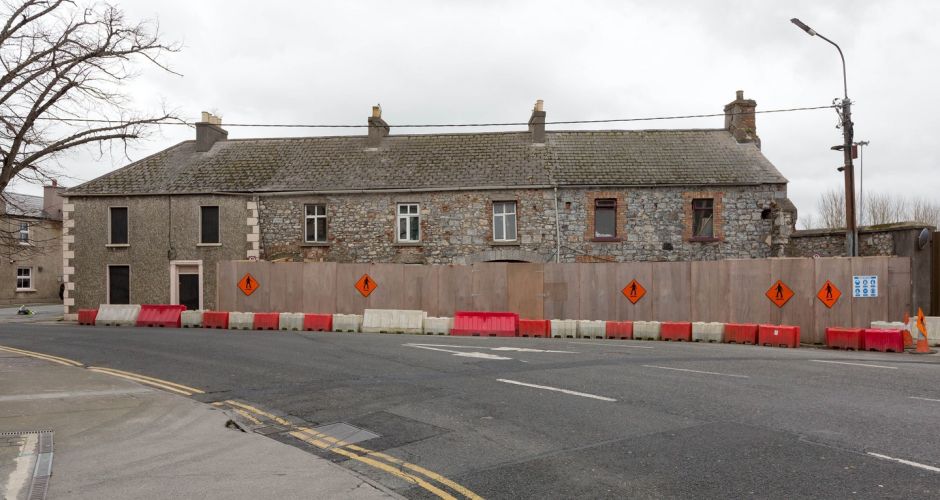 Geni Murphy
‘the Victorian terrace due for demolition contains upstanding remains of a medieval manse house associated with one of the cathedral dignatories’. ‘The report notes: “the most recent archaeological report by V.J. Keeley has not been made available for consultation”’

Despite huge opposition, Kilkenny County Council stands resolved to push through the Central Access Scheme (CAS) in Kilkenny City. The scheme will involve the construction of 2.5km of new road, including a 65m bridge through the centre of the city at a projected cost of €10.7m. Opponents of the scheme claim that the road will be visually intrusive on the urban landscape of Ireland’s best-preserved medieval city, will result in increased levels of heavy-duty traffic through residential areas, will destroy medieval archaeology and will lead to the severance of one side of the city from the other. An Bord Pleanála granted permission in 2009 for the main section of the road to be developed through the city centre (while refusing permission for additional spurs).

Opponents are calling for the completion of the outer ring road around the city, which would cost in the region of €44m to complete. Their group argues that its completion, along with the implementation of the Smarter Travel Scheme (which the Council has signed up to) would negate the requirement for a heavy-duty access road.
The Council however state that the road is crucial to the city’s future development. In particular, the Council cites the development of the 13-acre, former Diageo brewing site located in Irishtown and the 14-acre old cattle-mart site beside the river, as being particularly dependent on the CAS. However, it can be argued that the IT and educational businesses the Council is targeting for the developments require a well-developed IT infrastructure – not a transport infrastructure; and they are likely to be attracted to sustainable environments. As a city, Kilkenny’s most valuable asset is its built environment and this road threatens the integrity of that environment. The mart site has frontage on no less than three roads and is due for rezoning as a neighbourhood centre – so the requirement for additional access appears to be negligible.

A primary concern for opponents is the visual impact of the bridge, which is to transect one of the most exciting views of the River Nore. The bridge also threatens to obscure the view of the extraordinary Palladian Green’s Bridge. Indeed, the view was a ‘protected view’ until the Council de-listed it in order to make way for the construction of the new bridge. Due to the lack of a completed ring road, currently much through-traffic, including HGVs has no choice but to traverse the city through residential areas. Communities along the road’s route are concerned that the development of this road will only serve to further feed this inappropriate traffic through their areas. CAS traffic predictions are c.12,000 vehicles per day.

The CAS (or Inner Relief Road as it was then called) was first proposed back in 1978, and the road is a relic of that period of planning in which access for the car was prioritised. Now, however, towns and cities all over the world are trying to minimise the traffic entering their cores – Paris has just introduced a car-free zone along the banks of the River Seine; the entire town of Houten in the Netherlands, with a population of 44,000 people (twice that of Kilkenny) is entirely car-free; Copenhagen, Dubrovnik, Florence, Vienna and Oxford have all introduced smarter travel initiatives which limit car use and dependency. In these cities, the pedestrian and the cyclist are prioritised.

Maybe Kilkenny City is not as grand as those cities mentioned above, however the extent of its preserved medieval architecture is unique in Ireland and consistently ranks as one of the primary reasons people visit the city. In 2012, the County Council announced a €15m investment in the development of a ‘Medieval Mile’ tourism initiative which is to run between the two dominating architectural features at either end of the city – Kilkenny Castle in the south and St Canice’s Cathedral in the north. The CAS is to transect this Medieval Mile at the foot of St Canice’s Cathedral, thereby creating a heavy-duty road that travellers of this Mile must traverse in order to reach the cathedral.
It has also been discovered in recent months that the Victorian terrace due for demolition contains upstanding remains of a dwelling which a number of Ireland’s leading buildings archaeologists, including John Bradley (NUI) and Cóilín Ó Drisceoill (NUI) claim are medieval in date and highly likely to be the remains of a manse house associated with one of the cathedral dignatories. The report notes: “the most recent
archaeological report by V.J. Keeley Ltd. (October 2013) has not been made available for consultation. All of the previous archaeological reports for the site had concluded that there was little or no evidence for standing fabric associated with the manse. Following local pressure and a requirement in July/August from the architectural heritage protection division of the National Monuments Service 21 and 22 Vicar street were stripped of plaster to reveal the underlying stonework. This work has revealed that the south gable of 22 incorporates a late medieval/Renaissance structure which has undergone Victorian alterations. The late medieval/ Renaissance structure is a c 5m high gable containing a chimney breast with shouldering that finds clear parallels in Renaissance buildings in Kilkenny: for examples the former Shee House/Parliament House and the Rothe House. This architectural device is not seen on Victorian buildings in the city.The Town Hall, Fethard,
also contains shouldered chimney breasts and in Cork
such chimney stacks are a feature of many fortified houses of the sixteenth-seventeenth century (eg. Ightermurragh). The evidence
points towards the south gable of 22 Vicar street being the north wall of a building that stood to the south”.

According to Ó Drisceoil, houses such as these are like ‘hens’ teeth’ in Ireland. It is surprising then that both the county manager and the mayor have stated many times on both local and national media that nothing of value exists within the building. An Taisce has clearly set out how the building meets many of the criteria required for designation as a National Monument under the relevant legislation and has called upon the Minister for Arts, Heritage and the Gaeltacht, Jimmy Deenihan to designate the building as such without delay.
To date, nearly 7,000 people (equivalent to 33% of the borough population) have signed a petition calling on the local authorities to abandon the CAS in favour of completing the outer ring road. Opinion polls undertaken by the Kilkenny People newspaper demonstrate that the vast majority (most recently – 88%) of the people in the city do not want the road to go ahead.

Nevertheless Green Party councillor Malcolm Noonan has been the only elected member of either the Borough or County Council to oppose the scheme since it was first proposed. Attempting to respond to the recent public outcry (and with local elections looming in May), an additional two councillors have now tentatively begun to suggest that the scheme be “postponed”.

So it is clear that local representatives will not act to represent the local community on this issue. At a national level – aside from Ann Phelan TD, who has asked pertinent parliamentary questions on the campaign group’s behalf, there has been a deafening silence from all other constituency TDs. The Minister for the Environment, Phil Hogan, also sees great merit in building a road through the most historic part of his home city and has been extolling its virtues in the local media in recent months.

Nessa Childers MEP has been successful in fast-tracking a complaint to the Environment Directorate of the EU Commission about the demolition of the houses in Irishtown, which the campaign group claims may be in breach of an EU Directive on Environmental Impact Assessments.

The overturning of decisions such as these is not without precedent – a similar, horrendous plan was mooted for Oxford back in the late 1960s. Thankfully Oxford Council eventually shelved the plan in favour of the development of a (completed) ring road, the provision of park and ride facilities and a public bike scheme – Kilkenny currently has none of these. Today, Oxford is a city which manages the transportation of 150,000 people around its car-free centre through the provision of sustainable transport solutions.

As recently as 2005, Sligo County Council built an inner relief road (albeit much larger) through Sligo’s town centre – and in doing so created a barrier between the core of the town and its suburbs to the west. Anecdotal evidence suggests that because of insufficient feeder roads and the narrowness of junctions, rather than easing congestion the road has only served to create additional bottlenecks along its route. Much research suggests that roads such as simply move the congestion to different locations within the road network. The solution to traffic congestion is clearly less traffic – rather than encouraging additional traffic through urban centres.

In the case of Kilkenny, it would seem sensible and in line with all good planning practice, to complete the ring road and measure its impact on city-centre traffic in advance of driving a heavy-duty road through the heart of the historic city. It is now in the hands of our national and European law-makers to decide to what extent we value our cultural and environmental heritage under pressure from the last gasp of the usual Irish alliance of short-termist commerce, unimaginative politicians and petty municipal bureaucracy.

Geni Murphy is a freelance writer and communications consultant with particular in the arts and heritage.