I have for the last month been based in Eastern Europe, lecturing and contributing to the Anglo American University in Prague. The University has been very nice to me in light of the bedraggled and somewhat shaken image I must initially have presented.

Prague, though it has its deficiencies as a city, is conveniently located in middle Europe, a kind of rarefied transport hub, a fractious, ravishing touristy polyglot cosmopolis. As someone of mixed Irish and Austrian blood I feel more at home and safe here than I do in Ireland, given some of the outrages that have been perpetrated upon me by the vicious bullyboy elements of that society, especially its state and at times thuggish professional classes.

Nonetheless, I have not completely severed my ties. For over 16 years I lectured on Jurisprudence in Ireland and, for the last number of years, in particular I have been gradually winnowing my thoughts down on questions of moral good and evil and the intersection of such concepts with questions of legality. What are the good and bad things lawyers do? What is justice?

In three hours or so from Prague you can be in Germany, or more precisely in Nuremberg, a city I have always wanted to visit but have never before been able to.

“Nuremberg shines throughout Germany like a sun among the moon and stars”, according to the normally unimpressionable Martin Luther. 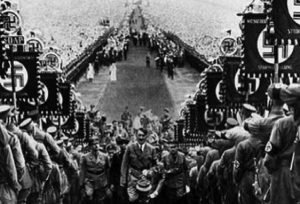 Nuremberg was for centuries the undeclared capital of the Holy Roman Empire particularly because the Imperial Reichstag and courts met at Nuremberg Castle. It was the preferred residence of most German kings, who kept their crown jewels there.

It was never a bastion of tolerance or Semitism. In 1298, the Jews of the town were accused of having desecrated the Christian host, and 698 of them were killed. In 1349, there was a pogrom of Nuremberg’s Jews. They were burned at the stake or expelled, and a marketplace was built over the former Jewish quarter.

Rich and groaning with architectural wonders, it was also a magnet for famous artists. Albrecht Dürer, the great German painter of the Renaissance,was born here and we visited his house. By the 19th century, the city had become an engine room of Germany’s industrial revolution.

The Nazis saw a perfect stage for their activities in working class Nuremberg. It was here that the boycott of Jewish businesses began and the infamous Nuremberg Laws outlawing German citizenship for Jewish people were enacted. Because of the city’s relevance to the Holy Roman Empire, the Nazi Party chose the city to be the site of huge Nazi Party rallies.

After World War II the city was chosen as the site of the War Crimes Tribunal. Later, the painstaking reconstruction – using the original stone – of almost all the city’s main buildings returned the city to a measure of glory.

Bavaria’s second-largest city and the unofficial capital of Franconia is an energetic place now where the nightlife is intense and the Reinheitsgebot determines that the wide-ranging drinking culture observes the highest quality standards.

There are a number of ways of approaching Nuremberg but all depend on recognising that surfaces are very deceptive, starting with the resurrected architecture. My own instinct was to look at the city geographically and historically.

The War Crimes court is some distance from the vibrant and wealthy re-created city centre. The historic footage gives the impression of a grand court but it is in fact quite small so the distances between the judges and the gallery of evil, condescending to the last, is arrestingly short – a matter of ten intimate feet.

If you get a tram from the central station in the opposite direction to the court you come to the futuristic stadium of the infamous Nazi rallies, designed by Hitler’s deputy Albert Speer, and immortalised in the spectacular film, ‘Reichsparteitag – Nuernberg’ by Leni Riefenstahl, the memory of which flooded back to me as I climbed the steps and approached the podium where the Nazis spread their gospel of hate and evil to the enraptured, the hysterical and the merely cynical.

It got me thinking about the failure of the European experiment and the recrudescence of fascism and extremism, in Russia and Hungary, in the US, the UK and incipiently in Western Europe, in Ireland. A new age of barbarism is upon us, the most forgetful generation. It advances on the foundation stones of civilisation.

Under the guises of economic advance, internationalisation and anti-racist tolerance we have had a race to the bottom and the gradual destruction of the quality of life of many world citizens: longer working hours, short-term contracts, the sidelining of the elderly.

The Nazis promulgated serfdom and unquestioning corporatism. Of course Weimar Republic stagflation and economic collapse, social unrest and meltdown may come to Ireland, a compliant population, controlled, self-satisfied, uncivilised and valueless. Our robotically-globalised social media- fetishing youth seems greedy and undirected. Ireland is its own epicentre of Social Darwinism, a technocratic, visionless society with no moral compass – a country that followed Bertie Ahern by Brian Cowen and then Enda Kenny.

Of course the left, traditionally and wishfully, sees political quagmire as an opportunity, but in reality it too often leads to authoritarianism. Or dangerously right-wing populism of the sort that spawned Brexit and the triumph of Donald Trump.

Barrister David Langwallner, a graduate of Harvard and the LSE, leads Ireland’s Innocence project, was until recently dean of Griffith College