In 2007, as the spin-heavy, scandal-bruised Blair era came to a close, British journalist Peter Oborne published a harsh polemic titled ‘The Triumph of the Political Class’. The book describes the rapid growth of a professionalised cabal of career politicians in the UK from the late 1970s onwards – a self-interested clique more devoted to perpetuating long, lucrative careers than to unselfish public service. Inspired by the work of Gaetano Mosca, an early twentieth-century Italian political theorist, Oborne’s analysis of this problematic development has been repeatedly vindicated as Britain’s confidence in its politicians continues to plummet.

Although Oborne dubiously concludes that the solution to the corrosion of British public life is to return to the safety of government by a mythical, highly moral and disinterested elite drawn from the traditional establishment, his identification of the career structure of modern careerist politicians is accurate nonetheless, and provides some insights on recent parallel developments in Ireland. It is worth analysing how Irish politics, always a hyper-local closed-shop, is now prey to the professionalisation of politics, and the associated problems, as Ireland’s political elite in general does little to represent the views of its constituents.

Oborne describes, step by step, the well-travelled career budding British politician should follow. First, study at Oxbridge, preferably PPE at Oxford, and immerse yourself in the youth wing of your chosen party. After graduation, become a journalist or a researcher to an MP, then a special advisor, and perhaps briefly a think-tank researcher or corporate lobbyist. All going well, the party leadership will add you to the A-list, parachuting you into a safe seat by the age of thirty. Thence you can start your (hopefully swift) ascent to the cabinet. Politicians who have followed this advice to the letter include David Cameron, George Osborne, the Miliband brothers, Nick Clegg, Boris Johnson, Michael Gove, Ed Balls, Yvette Cooper and Andy Burnham.

While Ireland lacks the size and political infrastructure necessary to systematically facilitate such regimented career paths, the blueprint for young politicos here is almost as straightforward. First, join your chosen party at a young age. Ideology is not a major factor in party politics, and so longevity, loyalty and graft matter above all. Next, choose your constituency, move there, and never leave. In fact, ideally you have been born there and only left for three or four years to go to college (where you spent every spare minute with your party’s youth branch, far away from actual political activity on campus). Unlike your British counterparts, you have to foster a strong local connection with your constituency due to proportional multi-seat constituencies, which don’t allow for ‘safe’ seats to be handed to favoured out-of-towners by party elders. To build this stock, run in local elections, early and often if needs be. This is the surest way of building your profile, and of gaining renown within the party and local area. 38 of the 52 TDs elected for the first time in 2016 previously served as county, city or town councillors, illustrating how crucial local experience is in getting to the Dáil.

“The Political Class is distinguished from earlier governing elites by a lack of experience of and connection with other ways of life. Members of the Political Class make government their exclusive study. This means they tend not to have significant experience of industry, commerce, or civil society”.
Of course, deputies emerging from the ranks of county councils are nothing new. A more recent development in the make-up of Ireland’s political class is an explicit devotion to politics as an independent vocation. An increasing number of TDs have little to no experience outside the political bubble: of the 52 first-timers elected in 2016, one in four is a member of this newly professionalised political class – that is, careerists who have worked almost exclusively as political advisors, parliamentary assistants, appointed senators, and party or union apparatchiks. The Dáil still houses plenty of teachers, barristers, solicitors, pharmacists, accountants and publicans, but an increasing number of TDs have already spent most of their adult life working at Leinster House.

While the road to the Irish cabinet is more parish-pump than PPE, and more Fleadh Cheoil than Financial Times, this increasingly common career path is no less damaging to the quality of our political discourse than its British equivalent. A TD who has spent their entire career within the Oireachtas bubble is unlikely to fully represent or empathise with the concerns of most of their constituents. This is especially true since a professional politician’s priority is staying within that bubble, not only as a matter of public service, but also as a matter of survival. Members of the new political class have no career to return to should they fail to be reelected, because politics is their career. While many members of Ireland’s old political elite are solicitors or teachers in name only, at least these professions have some connection, however tenuous, to the “real” world outside politics. The professionalisation of the political class is eroding this concept, further increasing the already yawning gap between the Irish electorate and their representatives.

In keeping with this, whereas once the youngest TDs were scions filling an unexpected vacancy in the family seat (think Enda Kenny, Brian Cowen, Máire Geoghegan-Quinn or Mary Coughlan), the Dáil’s freshest faces are now consummate careerists, who display a uniform lack of experience outside of the political realm. Fine Gael’s Noel Rock (elected at 27) worked as a parliamentary assistant in Dublin and Brussels for almost his entire pre-parliamentary career, and first ran in local elections at 21; Sinn Fein’s Donnchadh Ó Laoghaire (27) was a political advisor to his party’s Oireachtas members; and Fianna Fail’s Jack Chambers (25), a county councillor at 23, was once a summer intern at Arthur Cox. These men follow in the footsteps of other recent Babies of the House, like Simon Harris and Lucinda Creighton, both of whom had equally short or non-existent careers outside of politics before winning a seat.

This phenomenon isn’t just a young man’s game, however (and Irish politics is still very much a man’s game). TDs such as Sinn Fein’s Eoin Ó Broin (43) and Fianna Fail’s Marc MacSharry (42) have spent most of their careers as political insiders, as a party apparatchik and three-term senator respectively. It’s also a cross-party phenomenon. Members of the new political class populate the parliamentary ranks of Fianna Fail, Fine Gael, and Sinn Fein (Labour escapes this charge, only because it returned six stalwart TDs in 2016). Independents are indulging in the practice, too. Finian McGrath’s ministerial press advisor, Damien O’Farrell, is a Dublin City Councillor, who will ineluctably strive to succeed his boss as an independent TD for Dublin Bay North some time. 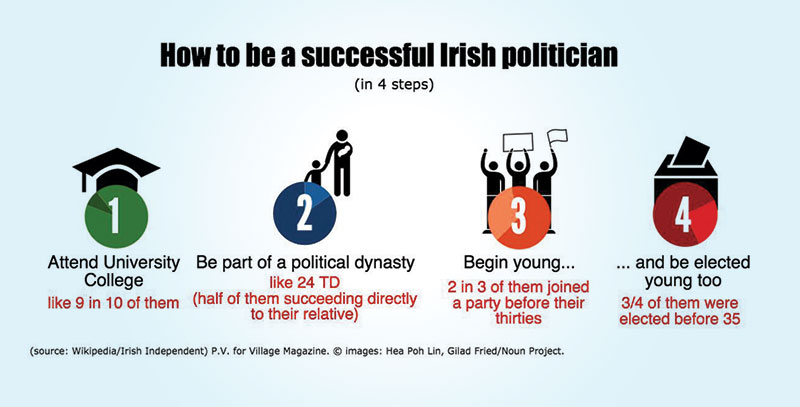 Ireland, of course, has always had a tight-knit, hereditary elite of self-interested careerists with little experience of anything but politics. That eleven of our thirteen Taoisigh have been closely related to other TDs is evidence enough of the deep-seated nepotism present in our politics. The Irish case is unusual, however, because the rise of a professionalised political class hasn’t displaced this old establishment, but instead the two groups have developed together and are seamlessly merging within our stale political culture. 28 of the 158 current TDs are closely related to a former TD – the vast majority of them the child of a TD who served in the same constituency. If we include those TDs whose parents were county councillors and senators, a total of 32 TDs are closely related to former officeholders, or more than one in five. This proportion is fairly constant among new TDs, too, showing how the recent rise of the professionalised class hasn’t displaced our electorate’s atavistic nepotism. Of the 52 new deputies, seven are the children of former TDs, and two more the children of county councillors, which means that more than one in six first-time TDs are related to former officeholders (including Maria Bailey, whose councillor father is also her parliamentary assistant).

These two strands of the political class now coexist, combining the worst of both worlds: clientelistic hyper-localism and the disconnected, self-interested nature of political careerism, with neither proper representation of constituents’ needs nor an appetite for ambitious national reform and leadership. The recent Constitutional Convention and the current Citizens’ Assembly were proposed as means to hear directly from the Irish people, but they were also clever methods of allowing TDs to shy away from publicly debating potentially controversial issues that might hurt their local stock and re-election prospects: abortion, climate change, equal marriage, and political reform. Instead, the Government can choose to follow (or not) the recommendations of these forums, after gauging how the public might respond, and without endangering much political capital.

The increasing chasm between politicians and constituents has been a common theme in Western democracies in the last few years, and Ireland is no different – the election slogan “Keep the Recovery Going” jarred with many voters earlier this year, since it incorrectly implied that the recovery was already being felt across the country. If we are to avoid the nastier strand of populism sweeping through much of Europe and America in reaction to this disenfranchisement, our parliamentarians will have to start leading, rather than following, on issues of major importance to their constituents. But the fact that our political system is still beholden to the confluence of parochial priorities and naked self-interest is also an indictment of ourselves. The status quo is unlikely to change if we continue to elect self-interested, inexperienced hacks from a shallow political gene pond, risking further alienation.