Partridge leaves the building.
Pat Kenny doesn’t like facing up to climate change
by John Gibbons
The classic comedy series I’m Alan Partridge where a former national chat show host is reduced to working the graveyard shift on a local radio station is chock-full of toe-curlingly awful moments.
In one infamous episode, Partridge has insulted the local farming community, and the following day a farmers’ leader is in-studio demanding that he apologise on-air. Already in a hole, the only way out for the redoubtable Partridge is to start digging.
Soon, he is accusing farmers of incest, not to mention feeding beefburgers to swans. Then there’s the secret sheds where farmers keep “twenty foot high chickens, because of all the chemicals you’ve put into them, and these chickens are scared because they don’t know why they’re so big…”
In early December 2009 I accepted an invite from Pat Kenny to ‘debate’ whether or not climate change is real with an Australian mining industry geologist and paid climate denier called Ian Plimer. So far, all pretty innocent. There is, however, a back story. Two weeks earlier, my Irish Times column ran a story under the headline ‘Kenny stirs up bogus climate change debate’.
In that piece, I lampooned Kenny’s constant promotion of debunked denialist canards. “Kenny opened up a 20-minute piece that mashed together anecdotes, interviews and half-facts, topped off with a generous dollop of the presenter’s own editorial slant”. I concluded the piece by throwing a variant of the old TV licence slogan at him: “We’ve heard all the excuses, Pat, and none of them work”.
Yes, it was a tad bitchy. Having listened to one attack on climate science after another, all hosted by Kenny, I had submitted him a list of questions to try to smoke out his views on the basic science of climate change.
Before 9 am the following morning, Kenny phoned. He clearly didn’t like the questions, and was audibly annoyed at having to lower himself to deal with me. Our conversation did not go well. Kenny accused me of not being a professional like him, of taking sides, of being a ‘green apostle’ and a ‘zealot’, etc. etc.
He made a series of vague threats against me during the course of this call (of the ‘do you know who you’re messing with, son, you’ll never work in this town again…’ variety) while insisting that the call was “off the record” and that I could not journalistically use anything he said.
As the discussion continued, I gradually drew him away from the name-calling and towards the science itself. To my astonishment, he was genuinely clueless on the specifics. The call lasted just under an hour, and, while torrid at times, it ended almost cordially – and five minutes later, he was live on air, doing his morning show like the seasoned pro that he is.
My exchange with Kenny left me smarting, and keen to make him squirm when the article appeared the following day. Columns are, after all, written by humans, not robots; piss one of them off sufficiently and yes, they may well abuse their position to kick you in the arse. Just like broadcasters, you might say.
Revenge is a dish best served cold. Kenny set the trap to lure me into his lair in Montrose, and, like a gobshite, in I went. The first thing I noticed when in studio was a bundle of his hand-written notes. Uh oh, Pat had his homework done this time.
I’m told it was 30 of the most bruising minutes aired by RTE in quite some time. The Sunday Tribune gave it a half page, with radio reviewer John Foley summarising thus: “It certainly was great radio. Did it enlighten the listener on the climate change debate? Not a whit. Just as Plimer hoped, you suspect”.
Still, Kenny – who some years before had successfully batted a complaint to the Broadcasting Complaints Commission of bias about a Late Late Show he’d done with denier Philip Stott – did again have the last laugh. Within weeks of this interview, my Irish Times column was, after two years, abruptly cancelled.
The question remains: why would such a smart, well-read individual be so utterly dogmatic on environmental and climate change issues? I can only speculate that the answer lies in cognitive dissonance.
If this stuff were true, then the era of millionaire lifestyles and endless jet-setting is over. Kenny’s life, in other words. That’s a tough pill for any of us to swallow, especially for the wealthy and fortunate. Denial offers an easy way out. Kenny’s recent decision to bail on a 41-year career in pursuit of a nosebag of cash from Radio Norwich copperfastened the impression of a career defined by a love affair with money, with journalism a distant second.
John Gibbons is on Twitter @think_or_swim
August 2013, Village Magazine 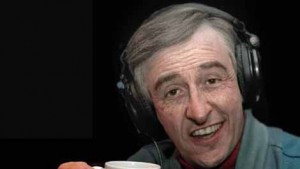