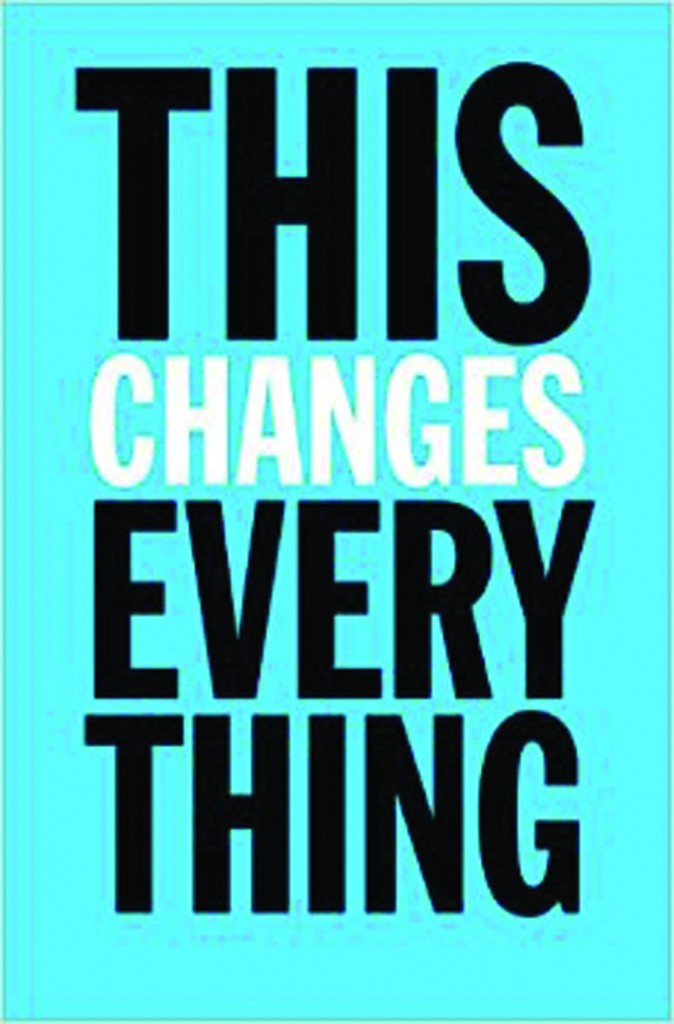 I finished reading Naomi Klein’s ‘This Changes Everything’ just as a major study by the WWF confirmed that, in a mere four decades, more than half of the wild animals on Earth had been wiped out. From the time I was in primary school to today, life on Earth has been impoverished more rapidly than at any time in the last 65 million years.

Humanity’s relationship with almost all life on Earth can be defined as extractivist – a phrase used repeatedly by Klein, in her sweeping, angry polemic against the rapidly unfolding madness of one species run amok in the world, destroying everything in its ever-expanding path.

Klein made her name in 1999 with ‘No Logo’, a withering assault on the hidden underbelly of the global brand business – the sweatshops, the crooked trade deals and the structural violence of the rich against the poor. This time, however, it’s personal. A neophyte to climate change, Klein admits to only having really tuned into it as an issue as recently as 2009.

She is, however, a quick learner and in the last five years, it has gone from being fodder for her next book to occasioning her the awful realisation contained in the book’s title: climate change does indeed change everything – and truly understanding this issue inevitably changes you. “I denied climate change for longer than I care to admit. I knew it was happening, sure…but I stayed pretty hazy on the details and only skimmed most of the news stories, especially the really scary ones. I told myself the science was too complicated and that the environmentalists were dealing with it”.

Having, like Klein, come from an entirely non-environmental background, and slowly, reluctantly, coming to realise the true import of climate change, I could personally relate to her initial desire to look the other way, and simply tune out this avalanche of ecological bad news, in ways that are analogous to how we humans are psychologically programmed to largely tune out the reality of human death. “Remember and then forget again. Climate change is like that; it’s hard to keep it in your head for very long. We engage in this odd form of on-again-off-again ecological amnesia for perfectly rational reasons. We deny because we fear that letting in the full reality of this crisis will change everything. And we are right”.

As a society, as a civilisation, our response thus far has been about as nuanced as curling, puppy-like, into a ball and hoping it will just go away. “All we have to do is keep on denying how frightened we actually are. And then, bit by bit, we will have arrived at the place we most fear, the thing from which we have been averting our eyes”.

We’ve become truly accomplished at both understanding and ignoring climate change. In the 24 years since international climate negotiations began in earnest, global CO2 emissions have risen by 61%. Crisis, what crisis? I vividly remember watching on in horror as the 2009 Copenhagen climate summit ended in bitter failure. The Irish Times was one of 55 major newspapers that, in December 2009, ran a joint editorial urging – demanding – that world leaders grasp this last ditch opportunity to avert calamity. One month later, the same paper ran an editorial complaining about the severe cold snap and wondering aloud if global warming wasn’t all just a big ol’ hoax after all.

From the ashes of disaster, sprang clarity. “I have come to think of that night (in Copenhagen) as the climate movement’s coming of age: it was the moment the realisation truly sank in that no one was coming to save us”, writes Klein. After all the guff and rhetoric, this emerged from the ruins of Copenhagen: “our economic system and our planetary system are now at war. Or, more accurately, our economy is at war with many forms of life on Earth, including human life”.

Klein spares some of her harshest critique for Big Green, namely those multi-million dollar US environmental organisations, specifically the Environmental Defence Fund (EDF) and the Nature Conservancy. Hilariously, it turns out that the latter actually operates its own oil wells, while the EDF regularly partners with Big Energy and helps it sell the myth that shale gas can be a ‘bridge’ to a mythological renewables-powered future. (Klein’s own rejection of nuclear energy as proven low-carbon technology is argued with little conviction and sounds more like a sop to her readership than a considered analysis.)

Klein lambastes the various ingenious schemes, from emissions trading to carbon offsets, many backed by Big Green, that have given the illusion of action while achieving precisely nothing. In its early days, the unofficial slogan of the EDF was “sue the bastards”, and it and other groups enjoyed dramatic successes on a range of environmental issues. Latterly, the joke goes, the new EDF slogan is “creating markets for the bastards”.

Under the leadership of business-friendly Fred Krupp, the EDF ballooned 40-fold from an annual budget of $3 million to $120 million. With the cash rolling, the emphasis for Big Green was developing industry-friendly “solutions” to the obliteration of the planet and the wrecking of our climate system (‘green growth’ is a particular favourite). Anything, in other words, as long as it didn’t fundamentally challenge the neoliberal narrative.

“The refusal of so many environmentalists to consider responses to the climate crisis that would upend the economic status quo forces them to place their hopes in solutions… that are either so weak or so high-risk that entrusting them with our collective safety constitutes what can only be described as magical thinking”, Klein opines.

There should be a special place in hell reserved for cuddly, lovable Virgin chief Richard Branson, who, to huge acclaim, announced in 2006 his commitment to invest $3 billion to develop ‘greener’ fuels for his gas-guzzling airline fleet. His epiphany was Al Gore’s Powerpoint presentation: “As I sat there and listened to Gore, I saw that we were looking at Armageddon”.

Behind the crocodile tears for the future, Branson’s real message was: forget regulations, leave it to industry to innovate and solve climate change! And sure enough, the $3 billion commitment evaporated as the new airline routes expanded. Waiting for telegenic messiahs like Branson or techno-optimists like Bill Gates to lead us out of the biological desert their fortunes are helping create is delusional in the extreme.

Geoengineering is starting to surface in polite circles as our best hope for dealing with the symptoms of climate change, without of course any accompanying imperative to actually address the causes. “The earth is not our prisoner, our patient, our machine, or, indeed, our monster. It is our entire world. And the solution to global warming is not to fix the world, it is to fix ourselves”, says Klein. Fiddling with untestable global ‘climate management’ schemes is simply an extension of the hubris that brought us to this dire predicament. In the words of environmental author Kenneth Brower: “The notion that science will save us is the chimera that allows the present generation to consume all the resources it wants, as if no generations will follow. It is the sedative that allows civilization to march so steadfastly toward environmental catastrophe. It forestalls the real solution, which will be in the hard, nontechnical work of changing human behaviour”.

Neither Big Green nor Big Energy (nor the political process it has captured) can save us from the unfolding cataclysm that is the Sixth Extinction, which daily gathers pace and steadily builds towards its furious denouement. Change, Klein observes, is coming, ready or not. Whether this begets more barbarism and profiteering or a wider social change that recognises market-fetishising growth-obsessed capitalism as a tragic aberration depends on how we react now, in the time that remains.

Klein offers the example of the abolition of slavery as perhaps the best recent analogue for the rapid dismantling of an entire economic system. The slave-driven economic model didn’t end because it wasn’t successful; it ended when it lost its social sanction to operate.

If there is to be hope in challenging a system that seems bent on destroying the living world and everything in it, it must be along similar ground. “We will win by asserting that such (economic) calculations are morally monstrous, since they imply that there is an acceptable price for allowing entire countries to disappear, for leaving untold millions to die on parched land, for depriving today’s children of their right to live in a world teeming with the wonders and beauties of creation”, Klein concludes. •