During the 1970s and into the 1980s, you could tell the silly season had officially arrived when the Sunday Press ran a story asking if Neil Blaney was about to rejoin Fianna Fáil. Some time between the dénouement of Garret FitzGerald’s time as Taoiseach and the dispatch of the Sunday Press, the silly season signifier metamorphosised into a piece on whether the government should rejoin the Commonwealth, inevitably by Éamon Ó Cuív.

Sometimes, just for a change, the story would be ‘Arming The Guards’, ‘Abolishing Compulsory Irish From The Leaving’ or the ever-popular ‘Getting Rid Of The Seanad’. No-hopers, all.

As late as 1996 the dearth of summertime meat allowed James Gogarty to impose himself on the public consciousness in July and to sustain a paranoia in the body politic so far into September that it spawned at least one , and arguably three, tribunals over succeeding years. 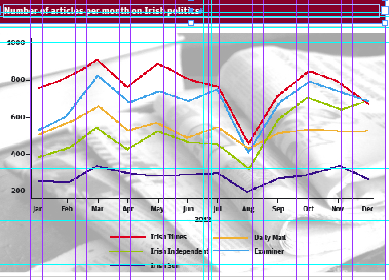 The old reliables were stories editors knew they could reheat when things got quiet as the Oireachtas went on holidays and the courts shut up shop for the summer.

Things are a little more disciplined now, and the MacGill Summer School marks the end of the Dáil term, albeit endured by an increasingly sceptical press.

Politicians, academics and other worthies are relied upon to reflect in depth, as they see it, on what a wonderful country Ireland would be if they spent the other 51 weeks practising what they preach in Donegal, and the political correspondents get to enjoy a few pints in Glenties pubs in the company of the plain, ageing, people of Ireland.

The silly season doesn’t mean there isn’t any news to report. There are alleged genocides in the Middle East, Ebola in Africa, and the ongoing war of nerves between Russia and Ukraine. And there are all those commemorations marking the outbreak of the First World War.

But newspapers are set up to serve their audiences, and news, like politics, is ultimately local.

In ‘Why are National Parliaments so Unpopular? Journalism, Information and Sentiment’, DCU political scientist Eoin O’Malley and others published a graph showing the number of political articles appearing each month in five Irish daily newspapers in 2012.

The graph provides a striking visual illustration of the silly season effect, as it dips perilously in August. But political coverage is about personalities and party power struggles, and not so much about policies, so there’s not much to write about when the protagonists are on holidays.

There was also a less-pronounced dip in April when the Oireachtas sat for just six days (because of Easter) but when the Government continued to meet.

Reporters complain all the time about slow news days, when a cute dog in distress leads the headlines. According to journalistic legend, the BBC took this to its logical conclusion on the Good Friday of 18 April 1930, as the newsreader solemnly announced “There is no news today”. For the rest of the bulletin listeners were treated to a piece of piano music.

But there is another kind of slow news day. The Slow News movement advocates a more reflective news, taking time to stand back from a story and repeat it in full, rather than simply posting the latest updates daily without context. Take a moment to think of how many government reports, inquiries, or legislative changes are reported in full. At any given time, one or two major stories will drown out the others.

Slow News takes those stories that get lost (or sometimes, deliberately buried) in the rush, and gives them the attention they deserve. What better time than the silly season, as the airwaves fill again with wafts of Tom McGurk and Kathryn Thomas to revisit and re-analyse those unread or under-digested reports?

“The problem is not the new technology of the news, but rather how quickly we have been enslaved by it”, veteran US political journalist Walter Shapiro wrote about Slow News. “Thinking, real thinking, takes as much time today as it did when the news was disseminated by fast-fingered telegraph operators. Deprived of context, facts do not speak for themselves. Analysis and interpretation of the news are needed to spur comprehension – and not just as an excuse for ideological rants and as a way to rack up cheap political points”. •