This magazine took a surprisingly benign stance on the mediocre legacy of Enda Kenny, despite the facts that he embraced neither the substantive equality nor the sustainability that animate this magazine.

The main reason for this was that it is clear that our times have thrown up much worse. In Donald Trump and the Brexiteers the two most influential Anglophone countries let themselves down and opened their hearts to dangerous fools at the centres of their mature body politics. Our politicians have not yielded to intolerant populism.

In the US, Donald Trump’s Presidency will, on the basis that character is destiny, end in a morass of shaftings, leaks, groundless policies and decisions, corruption, impeachment, and disgrace.

The UK is more tragic.

While Trump’s ascendancy symbolised an enormous and intolerant malaise, the UK’s muddle is more fragile, less personal, more endemic and not so easily solved. It’s about the British predicament.

England has for centuries been riven by a class system, sustained by those at the top as it provided fodder for their estates and their Empire, and now prolonged because… well who knows why. Latterly it has denigrated education and aggrandised a boorish press, reaping a whirlwind in moronism and intolerance.

Britain has struggled with its post-colonialising identity. Particularly in England many people are convinced of their country’s specialness, by which they may mean superiority. This is not something which has yielded much to the objective analyst. Few can doubt that it is now manifesting as a fullblown identity crisis.

The UK’s external relations are now egregiously compromised. The reclaiming of coastal waters for the national fishing fleet is merely symbolic of the divisiveness of unilateral exit. Too many failed to register either the historic or the economic significance of the EU. Cynical propagandists in the press and Tory party created a myth of over-zealous regulation emanating from Johnny foreigner in Brussels, when as the tragic Grenfell fire only underlines, regulations are easily denigrated as fodder for bonfires, until you see what they prevent.

Last year the UK voted to leave the EU. Village still predicts it will relent.
But it still has a great deal of pain to go through.

It will be humiliating to be outmanoeuvred at the start of the negotiation process by a bloc that has the upper hand, simply by dint of the nature of international trade and international-trade agreements which depend on complex long negotiations and which deliver benefits from mutuality, and disbenefits to those who cede.

It will be humiliating to ask for a reversal of the Article 50 process which allows countries to leave the Union.

The UK will decline economically though politically this is disastrous as the country is reeling from years of austerity, post-industrial decline and social discrimination.
It will continue to experience loss of international investment as the markets indulge their fears of uncertainty, of the adversity generated by less trade and less favourable trade, and less immigration with the economic dynamism it generates; but worse of the reality of Brexit, of a hobbled financial sector centred in London, of a declining industrial base, separated from its natural trading partners. It seems unlikely these pervasive sectors with outlets in the principal political parties will not register their discontent in ways that will resonate.

The country is also imperiled by fissiparous demography. Over-65s were more than twice as likely as under-25s to have voted to Leave (71% as against 29%). Disenfranchised young people already suffer relative to their parents in terms of jobs. The proportion of working 16- to 20-year-olds in low pay rose from 58% in 1990 to 77% in 2015. Their opportunities to obtain quality housing are inferior. Half of the people living in homeless supported accommodation are aged 16-24. And young people cannot look forward to the retirement and pension terms their parents were privileged with. The State pension which was payable from 65 (60 for women) is rising to 67. Disenfranchising their views on the economy and international place of their country will inevitably engender civil fracture.

More humdrumly, Britain’s politicians are dangerously deficient. Theresa May is stiff, petty and unimaginative, and played a cynical card for one who initially was pro-Remain. Her Tory successors, Boris Johnson and David Davis are unrealistic and buffoonish. Jeremy Corbyn is latterly being feted noisily by an anaesthetised electorate but he lacks a clear, positive and modern vision, most of all about the EU. 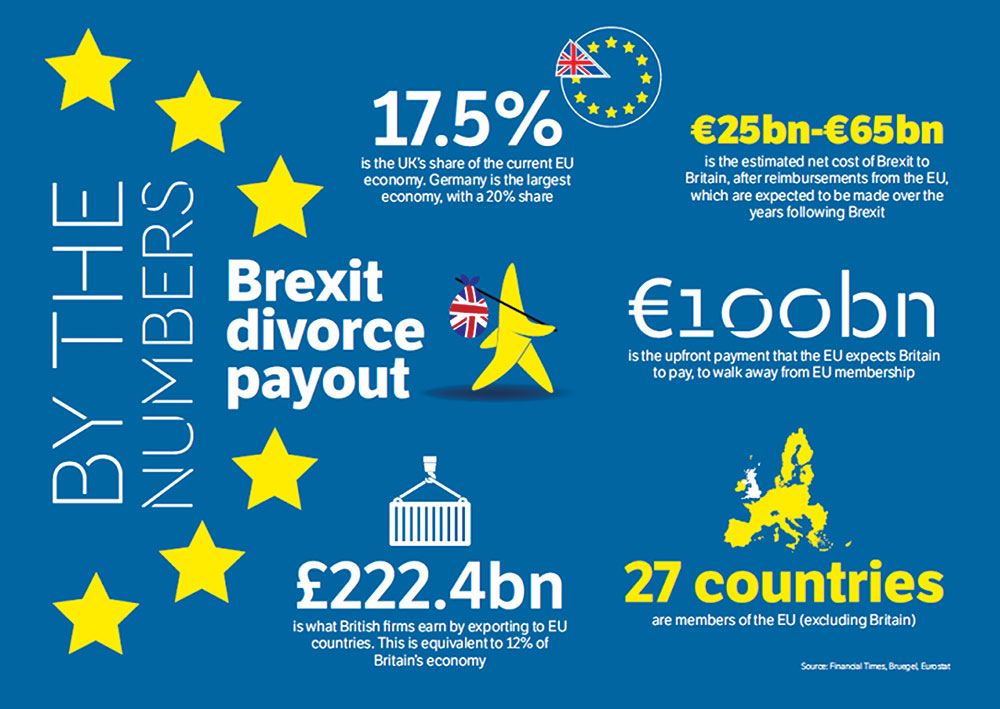 None of these people will unite their country. Their personalities, backgrounds and policies clearly prefigure divisiveness. But in any event even if they were skilful, and they are not, the situation is irredeemable: the country doesn’t know if it wants Brexit (it voted it 52:48% and though constitutional foibles mean they are reluctant to revisit a referendum, they seem fast to have changed their minds after they’d googled to see what it would involve. Moreover if it wants Brexit it’s not clear if it wants a Hard Brexit defined as embracing extraction from the single market and the customs union or a Soft Brexit.

There is also a systemic constitutional difficulty. The UK will struggle to provide a solution to Northern Ireland. Despite ample opportunity nobody has outlined a satisfactory border arrangement between it and this Republic. Moreover, the pressures exercised by the DUP, apparently the Tories’ chosen partners in government, may breach the Good Friday Agreement, an international treaty, which requires the impartiality of the British Government in its dealings between nationalists and unionists.

Perhaps the UK will leave but if it does it will soon come back. Economics dictates. Economically everybody benefits from trade.

In the end it is to be hoped a chastened but wiser UK takes a more comfortable place in world affairs, with its sense of its specialness diminished and its concomitant sense of superiority sundered. For without it, the UK is a great country, with a history of rare genius and a post-war tradition of magnanimous tolerance. To have Britain functioning dynamically and progressively will be a relief, particularly to its closest neighbours.