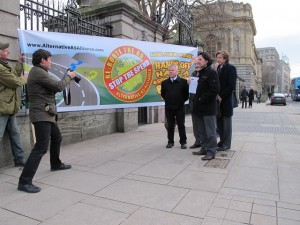 Vincent Salafia is back with a “Save Newgrange” campaign. A man with a panache for publicity, the populace associates the 43-year old with the Tara/ M3 and Carrickmines Castle campaigns. Now he is to address plans for a Slane bypass within a half kilometre of the boundaries of the World Heritage Site at Newgrange. Given the history of 22 road fatalities in Slane – caused primarily by articulated lorries – there are good reasons why

Slane’s residents want trucks to bypass their town. The NRA’s costly plan effectively delivers a motorway parallel to the M1, at one point only four miles distant, while causing significant environmental impacts once again in the Boyne Valley, making this the third motorway in the valley. It cuts between Slane and the Brú na Bóinne complex of Knowth, Dowth – and closest of all to Newgrange, Ireland’s most famous pre-historic site.

There appear to be serious questions about Salafia’s suitability to front this campaign. He has a history of falling out with campaigns over the years. As far back as 2004 Phoenix Magazine commented that he “seems to foment trouble in his own camp wherever he gets involved”.  It also noted that in 2003 “Salafia was accused by then An Taisce press spokesman, [Ruadhán] Mac Eoin (one of the co-authors of this piece), of censoring An Taisce press releases from the Carrickminescastle.org discussion forum, of which Salafia was the moderator”.  Endless self-referential and often abusive emails were exchanged between assorted environmentalists pleading with Salafia to co-operate with mainstream heritage groups, and Salafia and a small group of his cohorts. Salafia, for example, was accused of subverting an attempted alliance called the Friends of Carrickmines.

Now in 2010, Salafia has another campaign.  Once again cyberspace reverberates with personalised environmental vituperation and Salafia is being accused afresh of censorship, removing comments and distorting information. Meanwhile Salafia himself has just issued a press release, implicating others in cyber-attacks, stating “a complaint has been filed with the Garda Bureau of Fraud Investigation’s Computer Crime Investigation Unit, and Facebook Ireland, on behalf of the Save Newgrange campaign, alleging harassment, intimidation and cyber-stalking by the Bypass Slane Campaign”. It also complains “there has been a coordinated smear campaign against the Save Newgrange group” and that “attacks are increasing in intensity and malice”, before calling for “an investigation into the conspiracy, including links to the Fianna Fail party”. Salafia for his part says that, “the website is for supporters of the campaign only…we directed people to go to Boards [website boards.ie] and have those discussions” and that it is not a discussion forum.

As far back as 2001, the Sunday Business Post had carried a report titled “Hacker destroys Brehon Law research website”, detailing how Salafia had made a complaint to the Garda computer crime division that his website had mysteriously been attacked. How then does this heritage hero get so enmired in bitterness and fractiousness, having apparently split or been ejected from four high-profile environmental campaigns – “Carrickminders”, “Save Tara Skryne Valley”, “Campaign to Save Tara”, and most recently, “Shell 2 Sea”? He told Village “the thing is, in every single campaign in Ireland, there are always disputes: that’s just the nature of campaigns. It was the nature of the revolution in this country”.

Vincent Salafia first came to prominence in September 2002, as an occupation began at the Carrickmines Castle archaeological complex in county Dublin. At this stage Salafia was intermittently using the name “Michael O’Toole” (confusingly, his birth name;  he also passes as Ó Tuathal). At the outset of the Carrickmines campaign, Salafia had bravely indicated he would be the plaintiff in the proposed High Court action. He indicated he was a lawyer. Yet ultimately these cases were taken by fellow heritage activists Dominic Dunne and Gordon Lucas – with a subsequent case taken by Michael Mulcreevy.  While he had legal training in Florida, Village understands that although he applied many years ago to the Florida Board of Bar Examiners, he has yet to gain full qualification. Very early on at Carrickmines differences emerged between the campaigners. Around this time the first of multiple reports emerge of Salafia leaving behind debts, particularly to well-meaning environmentalists for rent. An unconscionable inability to work with others was gaining traction, with the proceeds from a benefit gig providing a source of acrimony here; a borrowed generator going missing there; and unapproved statements proving divisive thither.

According to Phoenix Magazine in 2004, Salafia was “booted out as a spokesman by the rest of the Carrickminders after several solo runs to the media”. In December 2003, while court action was underway, a press advisory was issued by Carrickmines plaintiff Dominic Dunne and others, stating Salafia “had no consent to either act on our behalf or imply any approval to do the same”. It also claimed “certain statements by him [Salafia] alluding to speak on behalf of others have been unreliable and misinformed”. Three years later in 2006, in the last of the three Carrickmines court cases, Salafia was once again turning up outside the Supreme Court, briefing the media. Once again a contradictory advisory was issued by Dominic Dunne. Salafia told Village that Carrickminders voted “democratically” for his continued involvement in the campaign, but others dispute this.

One of the more remarkable rows regarding Salafia took place in May 2004, involving the “Save the Tara-Skreen Valley Campaign”. Again campaigners issued a “please do not publish” press advisory, stating Salafia did not have either “consent or authority” to make press statements on behalf of the campaign or its individual members. As was reported in Phoenix, any committee members who voted for such action “got a solicitor’s letters from Salafia”. As at Carrickmines, Salafia had held himself out as the litigant for a legal action – while also promoting himself as spokesman. Village understands Salafia’s legal letters essentially accused the members of defamation by bringing his character into disrepute, after they asked him to temporarily stand down as spokesman. Many of the people who were involved were local, yet they subsequently disassociated themselves from further involvement with Tara. Some of Salafia’s most articulate and effective allies simply felt they could not continue.

Twelve months later, in May 2005, Salafia sought leave for a judicial  review of the Tara motorway. This High Court case was heard in January 2006. By that Spring the road was under construction. However, when the judgment on Salafia’s case came through in March, the result was a total and bitter defeat. Crucially, an irritated Mr Justice Thomas Smyth said it was inexplicable that Salafia had taken no part in the oral hearings held by An Bord Pleanála into the routing of the motorway. He was un-impressed that Salafia “spent his time writing newspaper articles” about the issue rather than going through the procedural niceties.  In one public email exchange with Michael Smith, then Chairman of An Taisce, now editor of Village Magazine and co-author of this piece, Salafia had in 2003 accused him of not getting “his ass frozen” out in the hills of Carrickmines – as Salafia and the Carrickminders were.  Smith replied that he and An Taisce were at that time engaged in a large number of road objections, including spending three weeks at an oral hearing on Tara – which Smith then warned would “make Carrickmines look like a tea party”. Salafia did not apply himself early on to Tara and in the end this failure cost him his locus standi i.e.  he was deemed not to have been an appropriate person to have taken the case.  Another plaintiff might have had more luck with the unfriendly legal system.  Salafia’s strategic nous further let him down when the expert witnesses lined up to assert that Tara – as a whole – was a national monument, decided, at least in part because of the way Salafia was handling the case, not to give evidence – only to change their minds in the end to the bemusement of the judge who refused to contemplate their change of heart or to hear this most crucial of evidence.  Arguably, Salafia’s fractiousness was at least a significant factor in the loss of the case.

Yet despite having €600,000 costs awarded against him, Salafia vowed to appeal to the Supreme Court. Indeed, as was widely reported at the time, to “take the case to Europe” (in fact Europe has a limited role in heritage litigation and even that depends on a reference by the national judge). However ultimately Salafia, unlike Carrickmines plaintiff Dominic Dunne who went all the way, in October 2006 agreed with the National Roads Authority to drop his appeal provided the NRA agreed not to pursue the outstanding costs. Salafia’s own press release at the time noted “from the very first day of trial my case sank into a procedural quagmire”. Salafia has since said to Village “the fact of the matter is that I never received one penny from the government…the state agreed to absorb their costs and pay their lawyers and I agreed to absorb my costs”.

Then and subsequently, Salafia exhibited a prodigious talent for enlisting high-profile celebrities like Stuart Townsend, Charlize Theron, Jonathan Rhys-Meyers and Seamus Heaney. Tara has been the cause célèbre of Irish heritage over the last decade.

Meanwhile another Tara group emerged in January 2007, the “Campaign to Save Tara” (CST). Set up with Kevin Hayes as co-ordinator, CST had a 5-point strategy – a vigil on top of Tara, a hands-on protest group, a political campaign, a PR campaign – and a legal campaign to be headed by Salafia. Within a week, Salafia resigned and the litigation strategy was dropped. According to Hayes, CST subsequently “allied cohesively with members of Meath Archaeological Heritage Society, academics, and others”. However he says, Salafia was a moderator on an on-line Tara discussion board and pursued “a constant virulent campaign against CST, with vicious attacks on individuals”.

Just over a year ago, in September 2008 Salafia turned up in Mayo at Shell 2 Sea, while Maura Harrington, one of its leaders, was on hunger strike. Harrington, no stranger herself to abrasive campaigning, claims she “immediately told him” that she “wanted to have nothing to do with him” and following a “short sharp exchange, he was gone within the day”.

So what explains the phenomenon of Vincent Salafia? On the one hand, he presents as a fearless, genuine and indeed charming promoter of progressive heritage causes. He has energy abundant and a certain genius for publicity (he once announced he was running for the Presidency of Ireland). Without him it is unlikely the Tara campaign would have been ingrained quite so indelibly on the national conscience. He has a catholic interest in issues of mainstream public controversy – from Brehon Law to the Presidency to the Libertas anti-Lisbon campaign. Yet he alienates a great number of his fellow campaigners. He is said to be particularly un-loved in the upper echelons of the Green Party which he, with some justification, considers betrayed Tara.

One decade and four campaigns on, it is seemingly clear that Salafia risks bringing divisiveness, strategic recklessness and fear to causes that deserve a better champion. Back in 2003 Michael Smith had suggested in a contribution to a Salafia-controlled website that Vincent Salafia attend anger-management classes. He never took the advice and in 2010 it seems to be the case that Newgrange awaits a grown-up champion. For his part, Vincent Salafia feels that he is the victim of personalised campaigns, saying: “again this whole thing is being individualised to take a personal swipe at me rather than to address the bigger issues”.