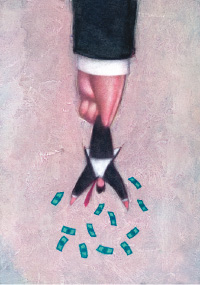 As the impending day of  Fiscal Judgement arives in the form of the Budget, many Irish workers have resigned themselves to both increased taxation and significant cuts in Health and Education. The gap between Governmental expenditure and tax revenue is edging close to almost €18  billion so something radical is needed.

It may come as a surprise but Irish workers are among the lowest taxed in the EU – according to the latest figures from the OECD. While the headline rate plus the income levy edge the marginal rate to mid 50% this is not a true picture of the  Irish fiscal landscape. Effective tax rates in terms of income tax and social contributions are very low by international standards.. A large portion of workers, equating to approximately a third of the workforce, do not pay any income tax  in 2007 because our income tax thresholds are high. The recent UK election campaign had Nick Clegg proposing to raise the tax threshold in the UK to £ 10,000 (€11,600) from the current rate of £6475 (€ 7600). In Ireland the threshold for a single worker is €18,300. For a married couple either of whom is over 65 no tax is paid if their income is less than €40,000. It make sense to bring more people into the tax net by reducing these generous thresholds. Surely they should be contributing at least some minimum level of tax?

It is intended to combine PRSI, health contributions and the income levy into a single tax. Employers groups will protest that this is a tax on employment since it will increase employment costs. But in comparison with other EU countries the employment costs in terms of tax and social welfare are relatively low in Ireland. For each €100 that an Irish worker can take home, the employer has to pay out €140. This extra €40 goes on Income tax and employer’s and employee’s PRSI contributions. The average across the EU is  €72 for each  €100 and in Germany the figure is €100.

A  historical comparison  with 2006 shows that even with an increased tax burden as a result of the health contributions and income levy the Irish worker is still paying less  income to the state than they were in 2006. The reality is that in 2006, any fiscal shortfall on income tax could easily be averted by bumper Capital Gains Tax, VAT and stamp duty – one-off transaction-taxes that have plummeted in the recession.

The light income tax burden in Ireland is most marked for high earners. People earning between €200,000 and €500,000 paid only an effective tax rate of  13.63% in 2007 – after availing of the various tax shelters (many of which are property-related and have no equivalent in the tax codes of other EU states). It is imperative this low effective tax rate be increased by whatever means possible. Its ludicrous nature  is exacerbated when one considers who these people are: a significant proportion of them are earning their high incomes on the back of state largesse – Hospital Consultants, University Heads, Politicians, Barristers working for tribunals and Solicitors advising the state (€11million was recently paid for NAMA-related work to a top Dublin firm) and General Practitioners with large medical card patients. Studies have shown such professional groupings  to be paid way in excess of their colleagues in other EU states.  For example, some health professionals  earn up to three times more than there UK counterparts. Arguments from lobbyists that these high earners will leave Ireland if taxed too heavily are fanciful in the extreme.

What has paid for the  40,000 new cars registered in the state to March 2010, when there is a scarcity of car finance in the domestic financial system?

In Germany, wealthy individuals have begun lobbying for higher taxes. Dieter Kelmkuhl, a retired doctor who launched a petition for a wealth tax, says: “It’s time for the wealthy to come to the aid of their country”. The Irish élite are unlikely to promote such initiatives. Perhaps it is time for them to show their patriotism somewhere other than the yearly rugby match against England.

Let’s not pretend that we are over-taxed in Ireland and let’s accept that the State can only cut so much. We all have to be prepared to pay effective tax  rates comparable to our EU counterparts if  we wish to have an acceptable level of  state services. The days of the Capital tax windfalls are over. Income tax must provide more Governmental Revenue.