Why do billionaires tend to be visionless climate-denying misanthropists? 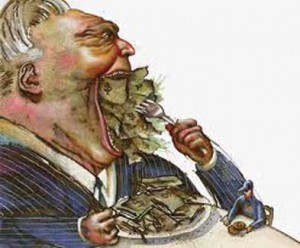 As evil plutocrat villains go, Australia’s Gina Reinhart is straight from central casting, writes John Gibbons. The daughter of a mining tycoon, she is now regarded as the world’s wealthiest woman, with an estimated worth of around $20 billion. Her fantastic wealth is all inherited; her parents’ vast fortune was made by exploiting Australia’s mineral wealth. Reinhart is also quite outspoken. Last year she bemoaned the fact that Australians were not prepared to work for less than two dollars an hour, unlike African workers. This fact made the multi-squillionaire “worry for this country’s future”.

Reinhart, whose wealth is entirely serendipitous, is not shy of advice for other people who would like to get ahead. They should, she says, “stop whingeing” and “Do something to make more money – spend less time drinking or smoking and socialising, and more time working”. Mind you, at the two dollars an hour wage she prefers, the average Australian would have to work for approximately five million years to match the pile Ms Reinhart got handed by daddy and mummy.

“humungous wealth is of little value when the electrical grid is permanently down, the global economy is dead and food production has been destroyed by chaotic weather.  Odds-on”

Reinhart is also, shock, horror, a climate-change-denier. In the last three years, tired of all the left-wing whining in the media, she has taken the step that more and more billionaires, both home and abroad, have discovered is foolproof in dramatically improving your media profile –that is, to start hoovering up newspapers and broadcasters. She is now the largest shareholder in Fairfax media whose journalists were reportedly openly fearful that Reinhart would turn them into a “mouthpiece for the mining industry”.

Her best buddy is Rupert Murdoch (net value: $13.4 billion), the tycoon who uses his web of media interests to grossly interfere in politics and undermine democratic oversight and accountability around the world. The influence of Murdoch’s odious Fox network in polarising and debasing US politics and demonising science, specifically climate science, is now well understood.

The net worth of energy-industry mega-tycoons the Koch brothers is around $68 billion – around the same as the entire GPD of Cuba, a country with a population of over 11 million. The Koch brothers invest some of their vast wealth in funding anti-climate change disinformation and astroturfing groups. They are also now dabbling in buying up media companies.

Here’s a simple thought experiment: imagine our 1,400-odd billionaires were planning to head off, in a fleet of luxury aircraft, on a flight path that would take them thousands of miles from land and crossing through some hazardous airspace along the way. First off, you can be certain they would insist the aircraft had been thoroughly checked prior to departure. This work would have been entrusted to the best engineers. Similarly, plotting their course, getting detailed weather forecasts and ensuring their planes’ fuel supplies were adequate, all this work would be placed in the hands of the leading experts in their field.

And, if they decided to bring along an in-flight medical team, these would be hand-picked based on experience, expertise and their status among their peers. You get the picture. The world’s billionaires generally know how expensive it can be to take the counsel of numbskulls.

And yet. When it comes to the Big One, whether or not industrial civilisation can survive the next couple of decades, and whether humanity itself can escape the jaws of an encircling trap comprising resource exhaustion, biodiversity collapse, ecosystem failure and climate catastrophe, the world’s richest people can hardly be accused of doing nothing.

Quite the opposite: their funding, media access and moral support is enabling an international cabal of climate deniers, liars and assorted charlatans to befuddle and bamboozle with impunity. What these patrician geniuses appear to have entirely misunderstood is that we (and yes, that includes the super-rich) really are all in this leaky tub known as the biosphere together.

Wealth, even humungous wealth, is of little value when international trade has collapsed, the electrical grid is permanently down, the global economy is dead and food production has been destroyed by chaotic weather. All of these vistas are odds-on in a world in which average surface temperatures will have shot up by over 4°C this century.

The controversy-averse IPCC routinely low-balls risks by excluding real but difficult-to-measure threats such as permafrost methane releases, yet it still says we have no better than a 50/50 shot at avoiding a 4°C global warming calamity. And that slim shot assumes we all act now to slash emissions.

You and I can fret, we can lobby, we can make our plans, but in reality, as individuals, we remain almost powerless. Our billionaire betters, on the other hand, have power and influence almost beyond measure. Yet, rather than acting to save even their own necks, many of them work diligently and spend freely to actually hasten our collective appointment with mass extinction.

Let’s conclude with a – perhaps wishful – update to that ancient Greek quotation: ‘those whom the gods would destroy, they first make filthy rich’.

John Gibbons is a specialist environment writer and tweets @think_or_swim