The elephant in the room at the so-far abortive meetings in Leinster House to form a viable government is the presence of a once popular leader now entirely without credit.

Enda Kenny even assumed a very low profile in the centenary commemorations of the 1916 Rising. His presence was easily overshadowed by that of President Michael D Higgins – who occupies a position of symbolic power in our modern day republic.

The Independent TD and commentator Shane Ross understood this very well when he stated that he was gazing at a “political corpse” when he was part of the first discussions with the acting Taoiseach. Independents have, and need, a keen nose for public opinion since they have no big political-party apparatus designed to keep them informed.

Ross was then extensively criticised for his use of language by the politically correct classes who felt he had disrespected the office of Taoiseach as well as by the supporters of a wounded Fine Gael.

Ross is in substance correct. It is virtually impossible to install a new government if it involves putting Enda Kenny in as its head. To do this would be to truly pervert the course of public opinion, as expressed in the general election. 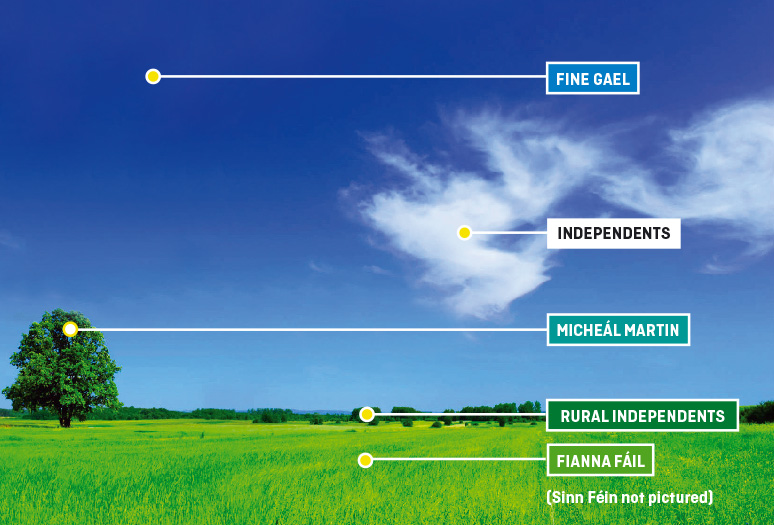 If things are changed utterly then it is because the election of 2016 delivered a hammer strike from the electorate to both Enda Kenny and the Fine Gael party. Willie O’Dea, one of the brightest men in the Dáil, also captured this point well in a recent article in the Sunday Independent. By coincidence the same paper has produced a poll which shows that Micheál Martin, not Enda Kenny, is the one most favoured by public opinion to be the next Taoiseach.

A large section of the media and commentariat expressed surprise at the scale of Fine Gael’s defeat – it seems the more comfortable members of the commentariat fell for the Fine Gael spin that Labour would lose but Fine Gael would hold its own.

The failure of the Fine Gael-led government started with the water-charges fiasco and continued into the election where Kenny made a pre-eminent contribution to the party’s defeat. He cannot escape blame on this front. It also appears that he has at least three hungry wolves within his own ranks who wish to replace him – Leo Varadkar, Simon Coveney and Frances FitzGerald.

Enda Kenny was comprehensively outshone in the TV debates during the general election by Micheál Martin despite the fact that he has spent the past five years strategically blaming Martin and Fianna Fáil for all of the problems that beset the country. It simply did not work. The public has moved on from the blame game, even if Fine Gael has not.

Moreover, Kenny told people they would not understand economics at the start of the campaign and towards the campaign’s end delivered the immortal insult that people who did not like him or his policies were ” whingers”. Fine Gael continue to defy public opinion by presuming, in the post-election discussions, that the party must be part of any government that is formed.

Caretaker Taoiseach Enda Kenny has now been defeated on three occasions – all three defeats have been very clear, public and formal – first in the election and twice now in the Dáil on votes to determine who should become Taoiseach.

There are signs, with over 40 days gone since the general election, that the public is wearying of the posturing and pranks of the political class as they collectively fail in the task of government formation. The first casualty of jadedness from the public will be the independents who will see the fools’ pardon extended to them in the election withdrawn if either no government is formed or an election ensues.

One of the most dangerous statements issued so far was by Fine Gael’s Richard Bruton who stated on Morning Ireland that he would consider the formation of a Fine Gael minority-led government but not participate nor contemplate its polar opposite a Fianna Fáil-led minority government. Fine Gael, including its fabled leadership contenders, seems to believe that the party has some sort of divine right to be in government.

Leo Varadkar, for all his faults in Health, seems to have got it right when he acknowledged openly that no government could be formed unless it combined the parliamentary numbers of both Fianna Fáil and Fine Gael. The numbers and the logic of the general election are pointing that way but neither of the two big parties wishes to accept that its rival should lead in the political equation: Fianna Fáil + Fine Gael = Stable Government.

Well before the election result was known I indicated my own view that if the two big parties were in touching distance of each other, in levels of political support, then there was a real chance that there could be a Fianna Fáil- Fine Gael partnership government – with even the possibility of a rotating Taoiseach.

The fact that this prediction, if you like, has not happened so far is because of internal institutional resistance to the concept, or competitive rivalry, from both parties. There is also a huge, in my belief, misplaced fear in both parties that by forming such a government they will leave a wide-open door for Sinn Féin to become the major force in opposition and the government in the election that follows.

This conservative-mindedness, or risk aversion, by the two big parties is precisely the reason they have both so far lost support to Sinn Féin, anti-austerity parties, and a broad, if inchoate, collection of independents.The two big parties no longer think big in terms of their ambition. The bigger parties attract an older (more reliable?) vote while the apparently more radical parties  capture the younger and more socially disadvantaged vote.

The upshot of the failed attempt by Kenny to put together a Partnership government of FF, FG and apparently some rural independents is that Fianna Fáil has declared its willingness, in defined circumstances, to give support to a Fine Gael-led minority government with Enda Kenny (its greatest asset according to one insider quoted in the newspapers) presumably left in charge of the country. Fine Gael has, despite FF’s generosity, ruled out a similar arrangement with Micheál Martin in the saddle – and that despite his obvious popularity for the role.

The FF-FG partnership coalition will only work if it is Micheál Martin as Taoiseach with Enda Kenny taking a back seat. It may in fact be too early in the discussions to have this prospect entertained and it may also be the case that Fine Gael has no mechanism (or will, for that matter ) to replace him.

Fianna Fáil and the independents have much more leverage in this situation than Fine Gael. Fine Gael seems slow to learn this lesson. The picture from the discussions of Leo Varadkar playing with his mobile phone as the Healy Raes looked on is testimony in some ways to where things are heading. It is a vignette not unlike the one of Nero fiddling while Rome burnt.
The reality is that it may take another 40 days, or even more, to put a government in place. The public voted for a change of government but they did not define who should lead that changed government.The electorate, as much as the crowd in Leinster House are to blame for the current political imbroglio.

We now have new parties, fresh independents and new TDs. Perhaps they need the cleaning of the air a new election might bring. A drawn All-Ireland generates more revenue. The meaning of the 1916 Rising only became clear after the decisive 1918 election.