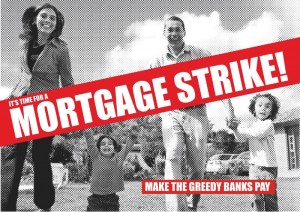 Activists from almost every county in the Republic have been mobilising as a group called ‘Independent Resistance’.  They met in late March at a central location, Kinnegad, to focus on campaigning and to adopt a guiding plan. The group which is independent and not party-aligned has signed up to the following plan for economic renewal, put forward by Professor Terrence McDonough of NUI Galway:

4. Guarantee a job for all (new jobs to be on, or about, the minimum wage)

5. Nationalise the Corrib gas fields with a compulsory purchase order.

6 Address the intolerability of many mortgages.

Dr Finbar Markey presented proposals for a general mortgage strike that would have an immediate and progressive impact on the Irish domestic economy. The funds that were once directed out of the country to foreign banking entities would remain in the country. Homeowners would for the first time in five years have the confidence and the wherewithal to start spending in their local shops, restaurants, and on products made in Ireland. This would in turn create new, real jobs which in turn would create even more jobs. A mass write down also offers the prospect of reducing wages whilst at the same time increasing quality of life. With significant reductions in the outflow of income to mortgage lenders and landlords, the cost of living also drops dramatically alongside wage expectations, making inward investment a very attractive option for many international companies. With increased local spending, the possibility of a co-operative bank assisting small and medium businesses, a rapacious banking system curtailed, and the renewal of democracy and sovereignty, it is obvious that the people of Ireland should at the very least start talking about a mortgage strike.

The group received reports from nationwide campaigns, signifying an upsurge in activism:

• Paul Scannell of Meath Anti-Eviction Ireland reported on an upcoming eviction of a 70 year-old Meath farmer, of how the bank had tried to seize his lands over a paltry loan that they refused to take payment for, how legal fees for idle solicitors had risen to €50,000 and that the eviction is due for Wednesday 27th of March.

• Supporters of the anti-fracking campaign, Des Guckian and Joe Keaney, of Leitrim spoke about national fracking developments, their fear that the ante has been upped with regards to pro-fracking propaganda, and their concerns that new legislation will mean fracking companies will be able to by-pass planning laws and procedures. Keaney described his recent correspondence with Pat Rabbitte and his attendance at a recent local IFA meeting at which he held an anti-fracking banner before being intimidated into putting it down. It was commented that there is a definite split in the IFA.

• Supporters of the turf-cutters group (TCCA) Des Guckian  and John McNamara of Longford / Westmeath reported a recent district court case in which turf cutters had been hauled before the courts for using machines to cut their turf.

• Niall Doyle reported on the young archaeologist involved in a stand-off with armed Gardaí in Limerick having re-occupied the apartment he had been evicted from the day before. He reported that the young man was not, as reported, armed and did not threaten anyone’s life other than his own.

• Jim Miller of Spirit of Éireann (Westmeath / Laois) reported on developments in the GM crop saga and the proposals for an equine vaccination trial in Offaly.

• Dundalk activists reported on the planned visit of Enda Kenny on the 24th of April to the Ballymascanlon Hotel.

• Aisling Butler of Dublin reported on the mix up  about the attempted eviction of an elderly cancer sufferer and her daughter from a house in Drumcondra the previous week and how members of “Anti-Eviction Taskforce” (AET) had called off supporters, claiming the situation was resolved, but also, she said, insisting on the elderly lady taking flowers from a bailiff against her own will.

• The upcoming protest at Dublin Castle on the 13th of April (EU fiannce ministers meeting) was also discussed and it was agreed that Independent Resistance campaigners would protest it was agreed another banner will be ready for that date, highlighting the economic strategy as outlined by Terrence McDonough.

• A discussion was held about advancing the “Attack the Tax” anti-property-tax campaign.