It is a terrible irony that the city of Hou­ston, the historic centre for big-hat US oil production, should bear such a climate-change-exacerbated catastro­phe as Hurricane Harvey. A huge, sprawling city, the fourth largest population centre in the US, Hou­ston has no zoning code and would appear to typify an unregulated, ultra-American approach to planning and development. At least under its new mayor, it is in the forefront of cities fight­ing to mitigate climate change in the teeth of the new federal inertia. Though Hou­ston starts from a phenomenally unsustainable base.

Reducing carbon emissions is one thing: mitigating the effects of climate change, when it hits, is another.

While some US cities are embracing innovative green infrastructure strate­gies for stormwater management as nature-based solutions, Houston is a city built on a swamp that has been drained over the past 200 years through a man­aged, 2500-mile system of bayous, creeks and gullies. Flat and low-lying, with compacted soils, it is naturally prone to flooding. This has been exacerbated by frenetic and un-planned development over recent decades which has led to a drastic increase in impervious surfaces – houses, roofs, roads, footpaths, parking lots, anything covered with tarmac and concrete. In turn, this has decreased the ability of the ground to absorb rainfall and slow run-off to the drainage system. The flooding caused by Harvey follows previous flood events in 2015 and 2016.

Kim McGuire in the Houston Chronicle has documented how in Houston’s Harris County alone, almost 30 percent of freshwater wet­lands were lost between 1992 and 2010 with the amount of impervious surface increasing by 25 percent from 1996 to 2011. Since 2010 8,600 buildings have been constructed in 100-year floodplains.

Since the 1980s city and county planners have responded to this by requiring develop­ments to build detention ponds, human-made structures designed to capture storm-water runoff and temporarily store it. However, these have repeatedly proved to be inadequate and others are promoting greener, nature-based solutions to complement the standard ‘grey infrastructure’ approaches. The Bayou Land Conservancy seeks to protect the floodplains and to re-purpose that land into a community amenity for wildlife habitat and recreation, as well as acting as a sponge for storm-water run-off.

We need to protect flood defences and catch­ment areas. Wetlands, from Houston, to Kolkota in India and the upper Shannon, need to be cherished, not just for their biodiversity, but as life-savers.

The urban-sustainability challenge is to den­sify cities, whilst supporting opportunities for nature-based solutions to address challenges of climate change such as flooding and urban-heat-island effects. Green infrastructure is a network of green space that conserves natural ecosystem values and functions and provides associated benefits to human populations. Many cities in the US are promoting innovative and far-reaching policies that directly address the challenges of integrating green infrastruc­ture into the dense, built-up urban centres and offer regulatory, financial, technical, and organisational solutions for its delivery.

In New York an interagency Green Infrastruc­ture Task Force was created to look at opportunities to add green infrastructure to capital projects. This includes representatives from the Departments of Design and Construc­tion, Parks and Recreation, Transportation, Education, Sanitation, and other City agencies. In 2012, NYC adopted legislation that requires new construction and alteration projects to capture more stormwater run-off, forcing developers to utilise green infrastructure ele­ments such as rain gardens, green roofs, permeable surfaces, and planting, wherever possible.

Philadelphia is another major American city with a track record in implementing green-infrastructure objectives and pioneered the concept of the ‘greened acre’. The city plans to convert nearly 10,000 impervious acres (repre­senting 34% of the city’s impervious surface area) into permeable greened ones, including rain gardens, trees, green roofs, permeable pavements, and planted roadside ‘bump-outs’, over the next 25 years. This is to be imple­mented by investment by the city in its own properties and through the setting of stand­ards for new construction projects. 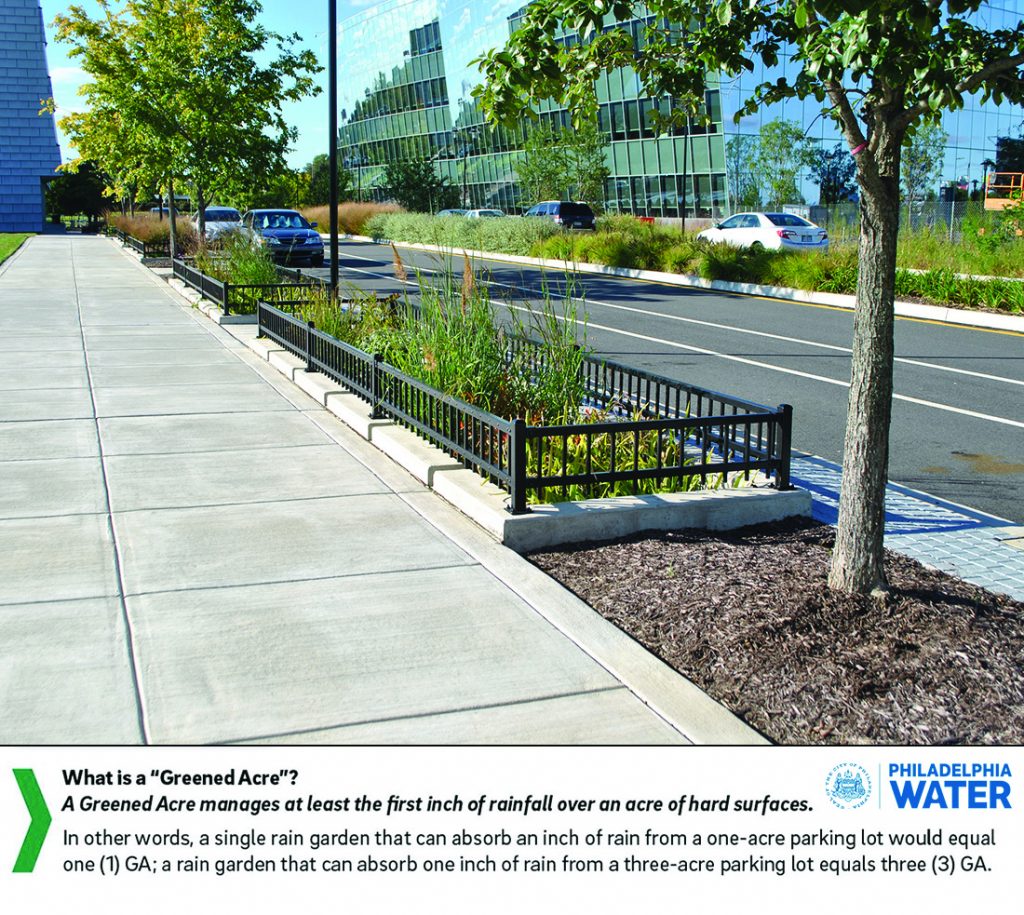 In addition to practical, technical guidance, the city has introduced legislative measures to penalise those who use and manage water inef­ficiently. Sites with a lot of impermeable, paved surface such as ‘big box’ retailers and shopping malls pay significantly higher water bills. These punitive instruments are accompanied by the availability of grants and loans to install green infrastructure measures such as green roofs. According to the American Society of Land­scape Architects, Philadelphia has been able to implement such measures due to strong politi­cal will from the Mayor and partnership and collaboration with stakeholders. Public support has been maintained for green infrastructure initiatives through spreading the investment across all neighbourhoods, rich or poor.

The US Federal Government under Donald Trump and the execrable Scott Pruitt of the Environmental Protection Agency are doing their best to scupper national and international efforts to recognise and combat climate change. The conservative Republican governor of Texas, Greg Abbott, is a prominent climate-change sceptic. He has even tried to do away with local government regulations in Houston limiting tree removal, as they posed a threat to individual freedom.

It is highly unlikely that nature-based solu­tions would have prevented the extreme flooding in Houston, with an estimated trillion gallons of water dumped by Hurricane Harvey. However green infrastructure has been shown to be an effective means to reduce and slow surface-water run-off. An over-reliance on grey-infrastructure drainage and flood preven­tion has been shown to be inadequate and costly.

Fortunately, many US cities and their govern­ments are bucking destructive Federal policies by acknowledging the reality of climate change and introducing far-reaching, progressive measures to mitigate its impacts. They are embracing green infrastructure as a means of making their cities more resilient, as well as more healthy and attractive places for their citi­zens to live. As to Houston, it is unclear what environmental lessons it will draw.