The term ‘greenwashing’ is normally understood as a pejorative. In Ireland, however, it’s official government policy. Take this revealing paragraph from the Executive Summary of the Food Harvest 2020 report:

“Green. Capitalising on Ireland’s association with the colour ‘green’ is pivotal to developing the marketing opportunity for Irish agri-food. This will build on our historic association with the colour and highlight the environmental credentials associated with our extensive, low-input, grass-based production systems… consumers in key markets will learn to recognise implicitly that, by buying Irish, they are choosing to value and respect the natural environment”.

Magic, really. Simply by repeatedly incanting the phrase ‘green’, reality could be conjured out of thin air. Or pure fantasy, to more accurately describe it. Ecologist Pádraic Fogarty, in his new book, ‘Whittled Away – Ireland’s Vanishing Nature’, outlines in vivid detail how the marketing sham that is ‘Origin Green’ came to be invented to thoroughly greenwash the entire Irish agrifood sector, wrapping it in the green flag as though industrialised food production were some kind of noble national cause into the bargain.

“We failed to see any actions in the (Harvest 2020) plan which would back up the bold statements about environmental protection. Where was all that extra manure going to go? The EPA already told us that half of our waters were polluted, and half of this was from agriculture”, Fogarty muses. “How was the plan going to reverse the precipitous decline in farmland birds like the corncrake, curlew or yellowhammer?”

However, despite these obvious red-flag issues, Fogarty notes that the very idea of sustainability and its Orwellian evil twin, known as ‘sustainable intensification” took on a life of their own. After the shock of the 2007/2008 recession and the collapse of the great urban pillars such as the major banks, there was a reflexive turning back towards something more tangible, less capable of vanishing at the stroke of a pen or the blink of a computer cursor.

Land. Agriculture. Food. These once unfashionable industries would enjoy a renaissance of political and commercial support and become the new currency of the smarter, ostensibly more copped-on post-recession Ireland.

Otherwise-intelligent figures like then agriculture minister, Simon Coveney, were co-opted to pull on the (origin) green jersey and flog this new orthodoxy for all it was worth.

Coveney actually wrote the following, in an article for an overseas audience about Food Harvest 2020: “Yes, it’s an environmental crusade – but with a real commercial edge. Happy cows and green fields make a good image. But to back that up, we now have the science to show the long-term benefits behind this kind of farming”.
The beef barons, supermarket buyers and highly-paid IFA top brass must have been falling around in laughter at the ease with which they had co-opted senior ministers to be cheerleaders for such a risible ‘environmental crusade’, a crusade involving aggressive intensification, forcing more and more milk per cow in a massively expanded national dairy herd, with its massively expanded greenhouse gas emissions.

This means short, highly stressful lives for many of Coveney’s erstwhile “happy cows” as they are pushed harder and harder to produce ever more milk, then quickly dispatched to the slaughterhouse the moment they can no longer maintain the prodigious daily output of milk. That much of this ‘sustainable’ milk production ends up being exported as powdered milk to feed Chinese babies underpins the mythological nature of our green thinking.
Ireland is now the second biggest milk powder exporter to the burgeoning new markets of Chinese middle class mums that marketing pressures are helping convince to abandon breast-feeding in favour of rearing their infants on the more ‘sophisticated’ cows’ milk from the other side of the world. 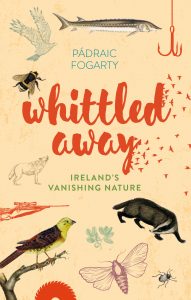 Ireland’s EU Agriculture Commissioner, Phil Hogan, weighed in on both emissions and food safety in a quite extraordinary RTÉ radio interview during the summer. First off, he stated – falsely – there was “no evidence whatever” that beef and dairy production contributed significantly to emissions.

He followed that up with the following zinger: “Science is clear, glyphosate is safe”.
Clearly, Hogan’s good news about glyphosate hasn’t reached California, which, from this July has listed this chemical, the active ingredient in Monsanto’s ‘Roundup’ as a carcinogen. This view is shared by the World Health Organisation’s cancer research arm, which in 2015 declared glyphosate a “probable carcinogen”.
This is not just about farmers. Anyone who wants to get their hands on glyphosate and many other ‘probable carcinogens’ and lash as much of it as they like on the ground only has to go to their local DIY or garden centre, where the shelves are heaving with pesticides, fungicides and herbicides. No training or supervision is required to purchase these powerful poisons, and you have to squint at the small print on the container to see the vague warnings about the devastation many such chemicals cause when entering watercourses.
Agricultural intensification has meant more and more dependence on chemicals. Pesticide usage has increased six-fold in the last 50 years, Fogarty notes. The EPA advised that the use of pesticides “has emerged as a significant water quality issue for 2015”. It notes alarmingly that a single drop of herbicide “can breach they drinking water limit in a small stream for 30km”.
Farming and ecology in Ireland are deeply affected by EU policies. Its Common Agricultural Policy (CAP) came into effect in 1962, long before Ireland’s accession to the then EEC. Irish farmers today receive around €1.2bn a year in CAP payments, and around another €500m under the Rural Development Programme.

All this taxpayer largesse towards one sector has its roots in the post-war drive to achieve food security in Europe, while latterly, EU-led environmental rules have also had significant impacts. For most Europeans today, food has never been cheaper, and the percentage of the typical household budget spent on non-luxury food is in single digits – an extraordinary and highly unsustainable state of affairs in itself.

A host of EU-funded environmental schemes, of which REPS is the best known, were rolled out over the last two decades, with some €3bn paid into Irish farms just under the heading of environmental protection. “It is hard to find fault in any of these initiatives and…intuitively, it must have had enormous benefit”, says Fogarty. “Alas, there is scant evidence for this”, principally due to the lack of systematic before-and-after monitoring.

Overall, he concludes that, despite this huge spend on environmental measures, water quality is still hugely affected by agricultural practices, while there has been no evidence of threatened species or habitats improving or recovering.

Worse, the basic subsidy scheme, Fogarty argues compellingly, “is actively destroying the environment”, as farmers are incentivised to homogenise their land to meet Departmental criteria, and this system perversely treats areas of potentially high ecological value, such as wetland, ponds and scrub land as “non-productive” and so ineligible for grant support.

There are many farmers who have a deep attachment to the countryside, who are as appalled as any environmentalist at its continued decline. “The greatest division lies between farmers in marginal (i.e. non-profitable) areas, which also happen to be of greatest scenic and wildlife value, and those in more profitable areas…the latter group is well represented by their lobbyists and have a ready audience among politicians and government ministers”.

The days of cheap, fossil-fuel powered food are numbered. Up to the recent past, the great majority of humans were farmers, since food production is the basis of life itself. Cheap energy, along with copious use of nitrates and phosphates has coaxed unimaginable productivity out of the world’s soils, but at a fearsome cost.

Farming will be more important in the future, not less. Fogarty sets out the lessons from High Nature Value Farming as well as the rewilding movement to see how farming, fishing and our once-abundant wildlife can not merely grudgingly co-exist, but in fact can be mutually beneficial.

Perhaps when we finally begin to understand the true value of our stunning natural heritage, and come to accept the right of our myriad fellow living creatures to co-exist, maybe we will begin at last to fight on its behalf. Who knows, in saving them, we may just save ourselves?