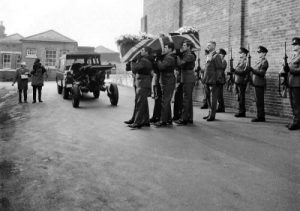 The 2010 Report of the Saville Enquiry describes much of what happened in Derry on Bloody Sunday (30 January 1972). Various commentaries and later publications have added further information, some of it of a nature that the authorities must have hoped would never be revealed. It seems however that the ferocity of the slaughter that day has still not been adequately explained. Could ‘pure’ revenge be that explanation, as it had been on several other occasions in the past when the British army committed similar atrocities in Ireland. 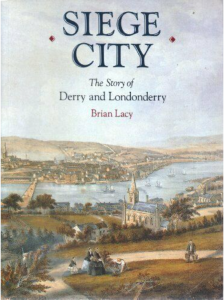 In the late 1980s while living in Derry and in the course of doing research for my book ‘Siege City: the story of Derry and Londonderry’ (published 1990), I became aware that as well as the terrible deaths in the city on Bloody Sunday, on the same day Major Robin Alers-Hankey, an officer in the Royal Green Jackets, had died also – but in London.  Major Alers-Hankey was the first British army officer to be killed in the Troubles.  He died of an injury sustained several months earlier while on duty in Derry’s Bogside, at a location that figured prominently in the deaths of the civilians on Bloody Sunday.  There are slightly differing accounts of the incident but, apparently, he was shot while providing security cover for the fire brigade which had been called out to a burning building in Abbey Street. It is possible that the fire had been started deliberately with the intention of luring the soldiers into an ambush.

I was struck by the coincidence of the major’s death on the same day as the terrible events in Derry itself and wondered if there could have been any connection between the two tragedies.  However, I didn’t know what time of the day the major had died and in those pre-googling days I had no easy way of finding out.  Clearly his death would have had to have occurred before the slaughter in Derry if there was to have been any connection.

I mentioned the subject to various people in Derry from time to time, but I never met anybody who seemed to know much about the incident.  Most times I spoke about it I got the distinct impression that people thought I’d be better not to enquire too much into the matter; at best it would be seen as a distraction from the main unresolved issues, at worst I might even be accused of providing a ‘reason’ or possibly an ‘excuse’ for the actions of the paras.  The latter, of course, was the last thing on my mind; but as an historian I felt that the question was worth pursuing or, at very least, worth asking.

I was asked by the Bloody Sunday Trust to chair a fairly large public meeting in the Pilots’ Row Community Centre in the Bogside on the weekend of the 25th anniversary of Bloody Sunday, in 1997.  In the course of my introduction, I mentioned the Alers-Hankey affair and although some of my other remarks were responded to by those attending and reported, for example in the Derry Journal, my reference to the officer’s death seemed to fall totally flat and was not mentioned again.

On 25 January 2002, however, the Irish Times reported that Martin McGuinness “was under pressure to state all he knows about 34 murders carried out by the IRA in Derry during 1972”. Among those listed was the killing of Robin Alers-Hankey.

On 8 February 2002, the Irish Times published a letter from Jonathan Stephenson, a trades union official in Belfast and a former chairman of the SDLP (1995-8). It appeared under the heading ‘Remembering Bloody Sunday’. In the letter Mr Stephenson (who was English) mentioned that Major Alers-Hankey was ‘a member of my family’. He went on to refer to Martin McGuinness’s role in the IRA in Derry saying: ‘it is entirely possible that Mr McGuinness might have a fair idea who killed him [Major Alers-Hankey].’ 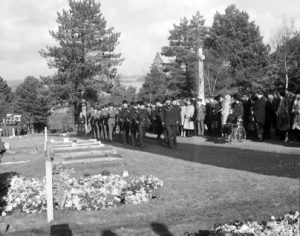 I didn’t pursue the matter in any way subsequently although my curiosity about it remained. I assumed that it would be dealt with by the Saville Enquiry.  By then living in Dublin, I made a preliminary check of the Saville Report immediately on its publication on 15 June 2010. The Report does mention the major’s death on Bloody Sunday as background to the situation in Derry at that time but (as far as I know) it does not mention the time of his death or suggest any link with the atrocity.  There also seems to be some discrepancy in the dates given for the original wounding of the major: Saville states 2 September 1971, while a number of army-related sources (e.g. Holywood Palace Barracks website) suggest 16 October.

On the day of the Saville Report publication (15 June 2010) and over the next few days I made attempts to contact a well-known journalist who I thought might be interested in what I had to say about the matter and who might mention it in his own coverage.* Having failed to make contact I wrote a short letter to the Irish Times, still indicating that I was unaware of the time of the Major’s death. The letter was published on 17 June and among those who contacted me as a result (18 June) was a female reporter from RTÉ/TG4 Nuacht who wanted to interview me.  Unfortunately, I cannot now remember the reporter’s name.  On the phone, I explained to her that my hypothesis that there might be a connection between the two events was dependant on the time of the major’s death and if it was possible that news of it could have reached Derry prior to the attack on the marchers. An hour later the interview crew arrived in my office in Dublin.  In the meantime, the reporter had done a bit of googling and had found a relevant reference in ‘Those are real bullets: Bloody Sunday, Derry, 1972’ by Peter Pringle and Philip Jacobson (published 2000).

The following is the relevant extract from the book, as reproduced on the web; the text inside square brackets has been added by me for clarification:

As the [anti-internment] march set of from the Bishop’s Field [in the Creggan], a transmission over the army radio from head-quarters in Lisburn reported the death of Major Robin Alers-Hankey of the Green Jackets in a hospital in the UK [sic].

That must have struck a sombre note with the troops braced for what they had been told was a certain confrontation with the young Derry hooligans and the IRA behind them.

Alers-Hankey had been hit by a bullit in the chest during a routine bout of ‘aggro’ in the Bogside almost three months earlier.  A fellow Green Jacket who was now on barrier duty [i.e. on Bloody Sunday] remembers how [months earlier] the crowd had suddenly scattered to allow the sniper a clear shot [at Alers-Hankey].

This seems to confirm that the soldiers on duty in the Bogside on Bloody Sunday (including importantly a detachment from the Royal Green Jackets who were manning the significant Barrier 14 in William Street) were not only aware of the death of the Major before the attack on the marchers took place but also, very importantly, the way his death had come about.

The death of Major Robin Alers-Hankey was itself a tragedy; he was a thirty-five year-old married man with two children. His was the first death among the officer class (I use the term deliberately) in the course of the Troubles.  The Alers-Hankey family belonged to the crème-de-la crème of the British establishment.  Important London goldsmiths, from the seventeenth century they had been involved in the beginnings of English banking, the foundation of the London Stock Exchange, various sections of the British Army and its imperialistic adventures – including the financing of some of them, various British colonial enterprises, and the peerage. 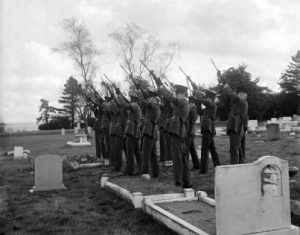 The Major was not an ‘ordinary squaddie’.  From the point of view of the army he must have been an iconic, even a totemic figure. His death must have been experienced as a massive blow to his military colleagues, and it is difficult to believe that revenge for it was not in the minds of at least some of those who had known him.  Although as far as I know it is nowhere acknowledged, it defies logic that his death was not influential on the subsequent events in Derry later that same day.  It seems to me that the only real question is, how influential?

*I felt the journalist in question would be in a better position to check the facts and his name would carry greater weight than mine. At the time I also wrote a short piece on this that I sent to the Derry Journal. It was published subsequently but in a ‘back’ page not connected with the main story.  Later I submitted a piece (much of it similar to what appears above) as a response to an issue of History Ireland (Sept/Oct 2010) that focussed on Bloody Sunday. My piece was declined as an article but accepted as a letter and published in the subsequent Nov./Dec. edition.  That resulted in some private correspondence with Prof. Niall Ó Dochartaigh of NUIG, the author of an important article in the Sept/Oct edition. But, for the most part, the questions and issues I had tried to raise were ignored.