There is something quaint about Conor Lenihan assessing the life of Charlie Haughey, the man who stole money from the fund for his father’s liver transplant and then fired his father as Tánaiste and Minister for Defence.

Lenihan has pieced together a mixture of his own memories of the former Taoiseach and anecdotes that his father, Brian Lenihan senior, passed on to him.

Because of this, the reader inevitably looks for evidence of personal bias on the part of this author and it is certainly a particular, personal work. This is a distraction because these characteristics import a significant source of new material, and new perspectives on old material. Nevertheless the media do not seem to have embraced Lenihan’s approach and strangely this book has not been reviewed in the mainstream press.

The book is easy reading if patchy. Lenihan of course has a pedigree of grandson, son, brother and niece of TDs and, as a famously boisterous quidnunc he exploits it – all. 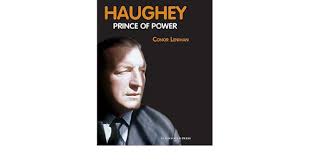 Lenihan opens by admitting, nay boasting, that it is rare that an adult life is heavily influenced by an historical figure, but that his was, by Haughey. The moral compass of the book spins unpredictably. It often lionises Haughey but also assiduously maintains another Lenihan-centred narrative which actually surfaces only sporadically and peaks in intensity with the sacking of Lenihan senior and with the loss of his bid for Áras an Uachtaráin weeks later.

The most poignant page in the book is the last one, the sole appendix, which reproduces the letter from Haughey requesting the resignation of Lenihan’s father. It begins “A Thánaiste, a Aire” and proceeds to threaten that if he does not resign that Haughey will request the President to terminate the appointment. An underpinning of authorial disdain is surely being implied.

Lenihan reprises a lacklustre recitation of the Small Man’s biography: son of a Free Stater, Lieutenant in the FCA, North Dublin ward boss, marriage to Lemass’s daughter, reforming minister, arbiter of taste (here Lenihan is too kind). But consistent hypocrite supporting Archbishop McQuaid’s banning of Edna O’Brien’s ‘The Country Girls’. The man from TACA, the 1960s Christian Brothers’ Boy in mohair suits doing the social rounds in The Shelbourne, The Hibernian, Jammet’s, The Russell and Groome’s. So far, so well-known.

Lenihan explains the realpolitik forcing Lemass to offer Haughey the Finance Ministry and Blaney the Agriculture Ministry leaving Lynch to see off Colley (59 votes to 19) and become Taoiseach. A brisk narrative on the Arms Crisis foreshadows Haughey’s first fall. Lenihan believes Lynch “knew much earlier than he insisted that weapons were to be purchased” but “backed off and decided to blame the entire fiasco on those ministers, and Captain Kelly”. Haughey, Blaney and Gibbons were “briefed at every step of the way, if not by Captain Kelly, then by the Army’s Head of Intelligence Colonel Michael Hefferon”. Still Lenihan is perplexed as to why “Lynch opted to put those involved on trial in the courts” and adds ‘my father always said that the main person pushing for a prosecution was George Colley”.

Haughey’s return is well done. He enlisted Reynolds and his country and western caucus and was back as a Minister in Lynch’s government by 1975. Haughey’s pretensions rose ever greater: “Some preferred the Mercedes but Haughey felt the Jaguar cut a greater dash, with its leather seats and inlay”.

Meanwhile back in the city Haughey’s constituency machinery cranked out cheques and Christmas turkeys. In summer there was a charity gymkhana (in aid of the Central Remedial Clinic!) with marquee and CJH in riding gear with Lady Valerie Goulding, silver trays and matching teapots on the lawns of Kinsealy. By 1979 he was leader of Fianna Fáil and Taoiseach. Lenihan notes (in a sentence that in fairness he appropriates from Haughey’s Wikipedia entry, that: “Within days of his becoming Taoiseach, Allied Irish Banks forgave Haughey £400,000 of a £1,000,000 debt. No reason was given for this. The Economist obituary on Haughey (24 June 2006) asserted that he had warned the bank ‘I can be a very troublesome adversary’”. Haughey’s 1980 Ard Fheis was “like a Baptist revival meeting rather than a political conference”. Then GUBU set in in 1982.

Lenihan surely veers towards the unedifyingly bizarre as he reveals that a contact of his in the Tory party told him that Haughey was “the first person to compliment Mrs Thatcher on her legs” at the Anglo-Irish summit which spawned Lenihan senior typically ponderous invocation of “the totality of relationships”. Haughey’s interventionism over the liver transplant for Lenihan senior in the Mayo Clinic is narrated scrupulously with Haughey ordering Paul Kavanagh who fundraised €270,000, though “no more than €70,000 was spent”, to divert the balance to Haughey and his Charvet shirts (though Lenihan, being a Lenihan, is much too practical to care, or even mention, the fetish for haute couture).

Lenihan recounts with palpable pleasure how Haughey survived the 1991 challenge from Reynolds (55 votes to 22). Haughey lived through his dissection by the Moriarty Tribunal and died of prostate cancer in 2006 before he could be prosecuted.

Homely depictions of Lenihan’s mother and her friends debating the ethics and sexiness of early Haughey mingle with Lenihan’s recollection of how Brian Lenihan senior’s hopes that Fianna Fáil might not campaign against divorce were dashed by Haughey. Other anecdotal references sometimes, though not always, seem tailored to elevate the perspicacity of the author’s dad but also give the book a beguiling sense of Lenihanesque intimate authority – as when he reveals that he acted as an informal intermediary for Albert Reynolds in the early 1990s, though he was a working journalist. There is charming colour too as when for example he captures the private sides of De Valera and Lemass, or remembers a bottle of whiskey placed at Jack Lynch’s setting at a dinner in the late 1960s being consumed in the course of an evening.

He reveals that his father and Ray Burke, of all people, agreed to fill out their ballot papers the same way in case they were scrutinised by the winner of the Haughey-Colley leadership contest in 1979. Lenihan senior also apparently described the contest as that between a knave and a fool. He favoured the knave. Conor Lenihan notes Colley’s henchmen could be as heavy as Haughey’s and claims that Michael O’Kennedy was pinned against a wall after he told Colley he would be voting for his opponent.

Peppered throughout are anecdotes such as one about the top table in the Burlington when Haughey demanded homage on his tenth year as party leader from the sycophants Richard Harris, Brendan Kennelly, Chris de Burgh, and Gay and Kathleen Byrne. At the same event, Lenihan senior was (monstrously) excluded from the top table, and instead seated near a vituperative Seán Doherty who called Haughey “a tramp” and vowed “to even things up” with him, something Lenihan told him was not necessary. Doherty of course spilt the beans on the Arnold/ Kennedy phone-tapping in 1992, sending Haughey tumbling.

He is partisan enough to disdain Garret FitzGerald’s economics and Northern policies and even implausibly to accept the laundering of Fianna Fáil’s cynical fundraising arm, Taca, as “innocent”.

As to Haughey it is more complicated. ‘Prince of Power’ is not a bitter book. Its judgements are kinder than those of other biographers. Lenihan takes a conventional view of the balance of good and bad in the man. On one hand be exudes “enormous personal appeal”, encapsulates “a more radical nationalism in the republican tradition”, and bizarrely even represents “a Walt Disney cartoon classic” without specification of which title. Pinnochio?

Contrariwise, Lenihan quotes Bruce Arnold, whose phone was tapped by Haughey’s Justice Minister noting loathingly that: “His well-tailored suits conceal a plumpness not unlike the French Emperor [Napoleon’s]. His handshake is without warmth or commitment; a soft, limp paddle of flesh is offered disdainfully…his eyes are essentially cold and suspicious; the stare is reptilian”. Well maybe at Arnold, it was.

Arnold’s overall verdict was that Haughey was a victim of unlucky deeds, poor judgement and especially abuse of power. Stephen Collins’ ‘The Haughey File’ agrees with Vincent Browne’s assessment that his “public image has been that of ‘the strong man’. In reality he has been perhaps the weakest of those who have led governments in this country”.

Lenihan cites Garret FitzGerald’s capstone appraisal: “a flawed pedigree…a wish to dominate, even own the state” and Dick Spring’s speech about his “greed for office… disregard for the truth…contempt for political standards” but allows the works of earlier biographers, Ryle Dwyer and Bruce Arnold, to provide the main texture of the book. Arnold’s reptile endures most indelibly. Being a Lehihan there is not much anger or self-righteousness – or much moral pointing; and there is some sympathy for cuteness and the pulling of strokes. The most derided flaw in anyone is naivety. Any personal negativity is suppressed though he does seem to regret Haughey was not prosecuted and jailed for obstructing the McCracken Tribunal.

Lenihan embraces the findings of the Moriarty Tribunal and its disclosures about CJH’s illegal money dealings reaching the equivalent of €45m, a haul that remains in the hands of his bejewelled family.

It’s not that Lenihan denies that Haughey was venal. It’s more that he doesn’t seem to think it’s that bad to be venal.

Lenihan sees the legacy of Bonaparte minor as Temple Bar, Ryanair, IMMA, and the refurbished Department of the Taoiseach.

Albert Reynolds, a man of rare bad judgement, considered Haughey “a very fair leader”. UCD Professor Tom Garvin considers, “historians will give credit to Haughey for starting the Irish economic miracle that took root in the late 1990s”. They almost certainly won’t. Patrick Maume’s Dictionary of Irish Biography is somewhat acquiescent: Haughey was “essentially a technician of power rather than an ideologue and his inconsistencies must be seen in this light”.

Inconsistencies, sadly, were only a part of the problem.

In the end a forgiving Lenihan in contrast rehearses Liam Cosgrave’s lame verdict that he “achieved more than his critics”.

A man from Belfast told Lenihan that Haughey “will probably be remembered as being good for the country but bad for politics”. He retold this at the Royal Hibernian Academy to scions of the Gallagher property developer family and they “fell around the place laughing at the cleverness of it all”. It is not clever. It may be funny, but in the end Haughey was tragic.