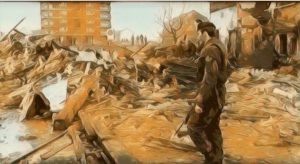 Saturday the 4th of December was the 50th anniversary of the infamous bombing of McGurk’s bar in Belfast by the UVF.  15 people were killed in the massacre. The bomb reduced the building to rubble.

The attack was the most devastating atrocity suffered by Belfast since the bombing of the city during the Second World War.

Brigadier Frank Kitson, the counterinsurgency specialist in charge of Belfast, knew that the bar had been attacked by Loyalist paramilitaries, yet participated in a black propaganda operation to blame the atrocity on the occupants of the premises. He and others  portrayed the explosion as an IRA own goal, i.e. that McGurk’s was an IRA pub and the bomb had been left there for collection by Republican terrorists, but had gone off prematurely. This was a lie.

Kitson is alive. He has never been asked why he covered up for the actions of the Loyalist murder gang.

Kitson is alive. He has never been asked why he covered up for the actions of the Loyalist murder gang.

Kitson’s lies were used by Tory politicians to mislead the House of Commons. The record has never been corrected. 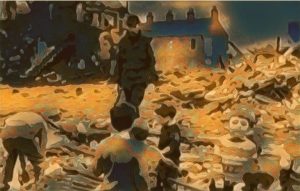 The British government is refusing to investigate what really happened.

The most likely explanation for the deception is that it was designed to avoid calls for the internment of Loyalist terror groups. At the time Ted Heath and NI PM Brian Faulkner had decided not to intern the UDA, UVF and Red Hand Commando.

Furthermore, Brigadier Kitson had entered into a conspiracy with Tommy Herron of the UDA’s Inner Council. It amounted to nothing less than an agreement for mass murder. Herron ran the UDA’s assassination squads in Belfast. They killed Catholics whether they were connected to the IRA or not. Herron was aided by Kitson’s allies in the RUC. Some of these RUC men were stationed at Mountpottinger RUC station in Belfast. They supplied murder weapons to Herron’s killers. This was how British State collusion with Loyalist murder gangs began in Northern Ireland.

Herron, Baker and others participated in the ghastly ‘Romper Room’ kidnap, torture and murder programme of Catholics they abducted on the streets of Belfast.

If the truth about the UVF’s responsibility for the McGurk bombing had surfaced, Kitson’s strategy of collusion with the UDA would have been severely jeopardised while still in its infancy. Members of both organisations might have been rendered subject to internment. Instead, Kitson chose to vilify the innocent victims of the bombing as patrons of an IRA meeting place.

Ciarán MacAirt is the grandson of two of the McGurk’s Bar victims. His grandmother, Kathleen Irvine was one of the fifteen civilians killed; his grandfather, John Irvine, was badly injured but survived. He has written a book which exposes the scandal in forensic detail. He has also produced an addendum which can be read here: The McGurk’s Bar Bombing Post-Script: https://mcgurksbar.com/wp-content/uploads/2020/10/McGurks-Bar-Post-Script-Final-Redux.pdf 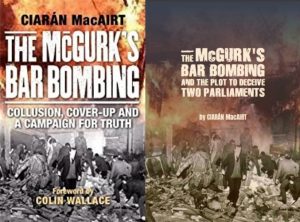 The scandal ranks among the most repellent dirty tricks of the Troubles and is part of a pattern of criminal wrongdoing perpetrated by Kitson that can be discerned in the Ballymurphy and Bloody Sunday massacre outrages.

The scandal ranks among the most repellent dirty tricks of the Troubles and is part of a pattern of criminal wrongdoing perpetrated by Kitson that can be discerned in the Ballymurphy and Bloody Sunday massacre outrages.

Yesterday, the Chief Constable of the PSNI refused to talk to a delegation representing the relatives of the families who mounted a dignified protest outside his office.

The families of those killed and injured are still trying to find out the full truth about what happened to their relatives. Last month they made a complaint to the Parliamentary and Health Service Ombudsman (PHSO) in London against the British Cabinet Office.

As far as the families are aware, this is the first complaint of its kind to the PHSO regarding a conflict legacy case and the Cabinet Office. The complaint concerns:

The original complaint to the Cabinet Office on 11th December 2020 also included a request to the Cabinet Secretary, Simon Case, for an investigation following the publication of a report by Ciarán MacAirt. See pages 24-25 of The McGurk’s Bar Bombing and the Plot to Deceive Two Parliaments. The report also includes new evidence from secret British military and governmental archives proving that there was a high-level, coordinated and sustained plot to deceive both Parliaments at Stormont and Westminster. 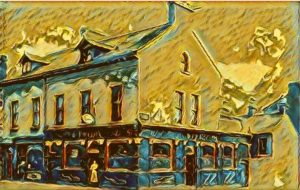 Colum Eastwood MP, leader of the SDLP, counter-signed and submitted the complaint to the PHSO on behalf of the families on Wednesday 4 November 2021.

After undue delay, the Cabinet Office denied us access to an investigation despite new evidence of a high-level, coordinated and sustained plot by public servants and Government Departments to mislead Stormont and Westminster about the McGurk’s Bar Massacre, and thereby influence the policies of two democratically elected Parliaments.

The Cabinet Office denied it is responsible for handling this complaint and referred it to the Ministry of Defence for investigation.

I have been forced to make a complaint to the Parliamentary and Health Service Ombudsman as I believe this decision is wrong.

Only the Cabinet Secretary and Cabinet Office can conduct a thorough investigation across Government Departments involving such high-level public servants who peddled lies to Government Ministers and withheld relevant facts.

Furthermore, the secret files prove that senior British Army commanders and MoD Civil Servants were complicit in the plot, so the MoD cannot and should not investigate itself.

Finally, after inordinate delay on its part, the MoD then informed me that it cannot comment as ‘the events at McGurk’s Bar are currently subject to civil litigation’. The MoD has no intention of investigating itself for its part in the cover-up of the McGurk’s Bar Massacre.

During the denial and delay of mishandling this complaint over the last year, two of our family members have died and gone to their graves without truth or justice from the British state. This is Britain’s simple but highly damaging strategy for dealing with the legacy of its human rights abuses during the conflict: denial, delay and death.

Our families still have to fight for scraps of truth and justice from the British state half a century after the McGurk’s Bar Massacre and its cover-up. 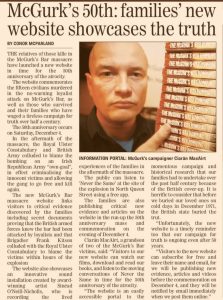 OTHER STORIES ABOUT BRIGADIER FRANK KITSON, BLOODY SUNDAY AND THE BALLYMURPHY MASSACRE ON THIS WEBSITE: