In England, conventional prejudice has Irish Catholics as violent, though with a picturesque charm to it. That same wisdom envisions Irish Protestants – especially Northern Protestants – as just as fractious, but also dour and bigoted. That view has come out in the portrayal of the DUP since it agreed the Confidence and supply Agreement with Theresa May’s government. The Evening Standard, edited by former Conservative Chancellor George Osborne, ran a front-page cartoon portraying Arlene Foster as Dr. Evil from the Austin Powers movies. The DUP’s social conservatism has been highlighted. A headline in The Guardian read: “from climate denial to abortion: six DUP stances you should know about”. The Independent had a similar headline: ‘from abortion to evolution: the terrifying views of the DUP you need to know’ and the Mirror referred on its front page to a “Coalition of Crackpots”.

Certainly, the DUP is strongly socially conservative, and elected members have made outrageous comments. However, it is not the only party in the North to hold such views. some of the most outrageous statements and actions have come from the SDLP, which gets a kinder press.

In 2015, then SDLP leader and MP for South Belfast Dr Alastair McDonnell was interviewed on BBC Northern Ireland about proposed changes to the North’s legislation on abortion. He rejected permitting abortion in cases of fatal foetal abnormality, saying: “…basically, the predictions in those circumstances are never accurate. Nobody can predict that a foetus is not viable, and that’s the problem and, as a GP, I’m fully aware”.

At the April meeting of Belfast City Council, DUP councillors voted with all other parties for a motion condemning ‘pro-life’ picketers who intimidate women attending the Marie stopes Clinic in the City centre. Three SDLP councillors, alone, did not support the motion. The three abstained, including the SDLP group leader, and deputy group leader. Declan Boyle, one of the three said: “I am proud to be pro-life and I have absolutely no regrets about how I voted”. The SDLP quickly suspended the three. 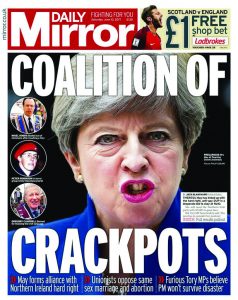 Their views are a caricature of what many would see as DUP members’ views. In fact the DUP, like any political party, listens to its electorate and can’t ignore that on social issues surveys have found Northern Protestants – most of whom vote for the DUP – are more liberal than Northern Catholics. The Free Presbyterian Church is still disproportionately influential, but  the fundamentalist wing of the party has been weakened by recent election results.

The decision by the British government that Northern women will no longer have to pay for abortions in England offers a (Northern) Irish solution to a (Northern) Irish problem. Abortion will be available for free for women in the North – but in England, not at home. And so with what we might describe as Irish republican elegance the DUP will side-step any vote to introduce it. When commenting on the DUP, many British commentators have forgotten that it is a successful and pragmatic party. Like other mainstream parties, its priority is power rather than principle. Those who underestimate the DUP are the same people who wrote off the possibility of the UK electorate voting for Brexit, Trump being elected as US President, and positively gloated that Corbyn was leading the British Labour Party to electoral disaster.

For Theresa May, the embarrassment with the DUP will almost certainly come from secular issues: NAMA, the Renewable Heat Initiative, building contractors red sky, or some workaday, modern, new scandal. NAMA and RHI in particular have not gone away for the DUP. They smell more of Charlie Haughey’s Fianna Fáil than the Gospel Hall.

Of course, as is  traditional for smaller parties propping up governments, the Conservatives will burn the DUP, unless the DUP gets its burn in first. In the meantime, in making their bargain, the DUP have shown itself a better negotiator than the Irish Labour Party. As in so many things like Fianna Fáil with a ten-year lag, really.