With mounting  expectations of a general election in the latter part of next year, the main political parties are positioning themselves for a role in the next government. Given that neither Fine Gael nor Fianna Fáil has any prospect of securing enough seats to run a single-party administration, they are both concentrating on their choice of post-election partners. Leo Varadkar has suggested with some degree of certainty that the election is likely to be called before the third and final budget deal envisaged in the ‘confidence and supply’ agreement with Fianna Fáil and has put his troops on election footing. As the final call will be his as to the date of the contest, his prediction carries weight and should be seen as a marker as to the lifetime of the current administration. 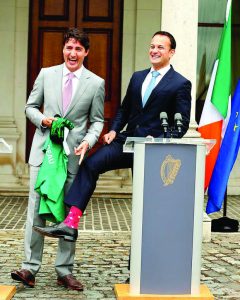 The government’s dependence on Fianna Fáil, of course, gives Micheál Martin significant leverage on the circumstances in which the election is called, which is always an important influence on the outcome. He has the power to bring down the Fine Gael-led government if it is perceived to have breached the terms of the confidence-and-supply arrangement, but timing is everything and there is a real danger that the electorate could punish Fianna Fáil if it is per­ceived to have acted opportunistically in pulling the plug. Of course opinion polls and any perceived damage inflicted by the continuing crises in housing and health, in particular, could push a decision for the early part of the following year. The last two general elections, in 2011 and 2016, took place during the month of February.

As the confidence-and-supply arrangement expires next autumn, the likelihood is an elec­tion around that time, provoked by some disagreement over the budget or on some other matter over which either of the two largest par­ties manufactures a crisis. Opting for an earlier election risks a divisive contest overshadowed by the debate over abortion which is expected to dominate political discourse in the first few months of 2018 in the approach to the promised referendum on the repeal of the 8th Amendment, in May or June.

Both parties have in their own predictable way ruled out any post-election grand coalition while simultaneously dismissing any prospect of a deal with Sinn Féin, which is on course to be the third largest party. Varadkar and various minis­ters have said that they would not go into government with Fianna Fáil, citing reasons including the fear that it would cede the leader­ship of the opposition into the willing arms of Gerry Adams, or his most likely successor, Mary Lou McDonald.

That situation would for the first time present a clear ideological split between the government parties and the rest on largely left-right grounds notwithstanding the number of independ­ents who originate from one or other of Fine Gael or Fianna Fáil, and are of a conservative persuasion. Fine Gael is arguably more united in its objection to, even abhorrence of, entering into any arrangement with Sinn Féin for a number of reasons including the whiff of gunpowder but also on economic, social and other grounds.

Sinn Féin entering government with Fianna Fáíl would inevitably signal the end of Martin’s leadership, as he has invested too much intellectual energy in dismissing it.

While Martin has been most obdurate in his resistance to going into power with Sinn Féin because of its links to the IRA and the thirty-year conflict, and his dubious claim that Adams and Co. would sink the economy (something that would never happen under Fianna Fáil) others in his party are not so reluctant. There are quite a number of influential people who would live with Sinn Féin in government, particularly if the num­bers broke down on a ratio of 2:1 with FF in the driving seat. They would be even more comfort­able if Adams had gone quietly into retirement by the time they had to face any such prospect. Such a scenario would inevitably signal the end of Martin’s leadership as he has invested too much intellectual energy in dismissing it, repeat­edly, and some heavy hitters in his own ranks would not be sorry to see him go.

All of this presumes that Sinn Féin would enter government at any cost, and with any partner, if the numbers stacked up and that is certainly not a given. There is an appetite at every level within the party to be in government, both north and south – and at the same time if possible, but the lessons from Labour’s most recent spell in cabi­net and its subsequent slump, have not been ignored.

Whatever happens, the post-election numbers will determine the formation and make-up of the administration. Given the chronic and worsening crisis for those who are ill, or whose relatives require hospital care, the scandal of a genera­tion unable to acquire an affordable home or a decent job and income, and the uncertain future of the country post-Brexit, it would be wrong to assume that the two main parties will be the only ones who can determine the shape of the next government.